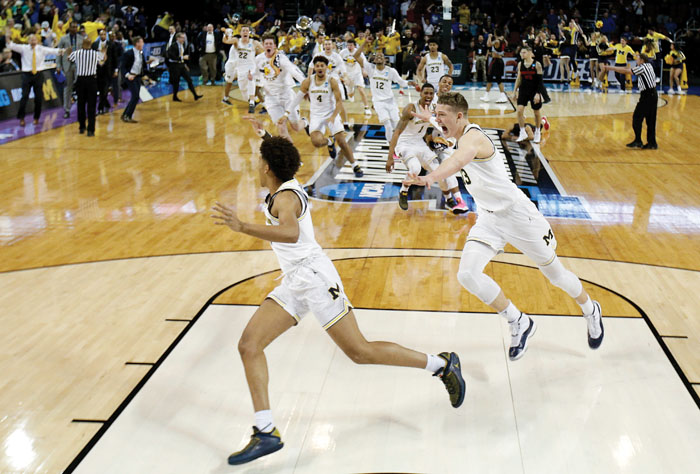 By DAVE SKRETTA, AP Sports Writer
WICHITA, Kan. (AP) — The unflappable freshman with swag to spare let loose a long 3-pointer just as the buzzer sounded, watched it splash through the net and took off on a dead sprint around the arena.
“I saw everybody celebrating,” Michigan’s Jordan Poole said later, “and I always thought if I hit a shot like that, I didn’t want to get tackled. So I tried to avoid everybody.”
He finally gave up, allowing the sweetest of parties to truly begin.
Poole’s buzzer-beater, which came after Houston squandered a chance to lock up a spot in the Midwest Region semifinals, lifted the third-seeded Wolverines to a 64-63 victory Saturday night — and left longtime coach John Beilein struggling to find the right words.
Dramatic? That’s a good place to start.
“I’m just trying to appreciate the moment of what just happened,” Beilein said. “When he makes that shot, I’m making sure the shot got off. I’m managing my team. I can’t even look at the celebration.”
“We did not play well, and credit Houston for that,” he said. “Sometimes you feel, well, geez, why did we win? But I’ve been on the other end of those many, many times. We got a fortunate break.”
That came when Devin Davis had a chance to seal the win, and the Cougars’ gritty forward missed a pair of foul shots with 3.6 seconds left. The Wolverines (30-7) called their final play, and Muhammad-Ali Abdur-Rahkman found Poole on the wing.
The youngster’s shot hit nothing but net.
“Sports is a great metaphor for life sometimes. It’s not always fair,” Houston coach Kelvin Sampson said. “I thought our team deserved to win that game. For 39 minutes, 57 seconds, I thought we were the better team. Credit their kid for hitting a big shot. It was a big, big shot he hit.”
Abdur-Rahkman and Moe Wagner scored 12 points apiece to lead Michigan, but it was the unheralded freshman who stole the show. Poole’s flair for the dramatic earned his team a trip to Los Angeles for a West Regional semifinal against North Carolina or Texas A&M next week.
Rob Gray scored 23 points and Davis finished with 17 for the sixth-seeded Cougars (27-8), who were trying to reach their first Sweet 16 since the last of the Phi Slama Jama teams in 1984.
They just about did it.
Davis gave the Cougars the lead when he made two free throws with 44.1 seconds left, then pushed the advantage to 63-61 when he made the second of two more foul shots with 24.9 seconds to go.
Abdur-Rahkman and Charles Matthews came up empty at the other end for Michigan. Davis pulled down a crucial rebound, and then stalked to the foul line.
The senior forward missed both.
“It’s hard to put into words,” Gray said. “I felt like we had the game won.”
The down-to-the-wire outcome was hardly surprising given the way the rest of the game went. There were 17 lead changes and 12 ties, including 28-all at halftime.
After his huge performance against San Diego State, the Wolverines were wary of Gray every time he touched the ball. They blanketed Houston’s star on the perimeter, cut off lanes to the basket and held him to just eight points on 2-for-11 shooting in the first half.
Whistles became constant as the second half wore on, and both teams soon found themselves in foul trouble. Wagner picked up his fourth with 8:43 to go, and Breaon Brady soon took a seat with his fourth for Houston, as the game turned into a glorified free-throw shooting contest.
Michigan converted eight straight at one point to take a 57-53 lead with 3:42 to go.
Armoni Brooks answered with a 3-pointer, and Davis converted a three-point play after fouling the Wolverines’ Duncan Robinson out with 2:06 left, giving the Cougars a 60-59 lead.
Wagner answered with a putback basket for Michigan with 1:41 left, but after the teams swapped 3-point misses, Davis grabbed a crucial rebound and made two foul shots to give Houston the lead.
His night would have been a whole lot better if the game ended there.
“It’s March Madness. It’s bigger than basketball,” Gray said. “Those guys in the locker room, I’m super proud of them. I’m just glad we had this opportunity to come play in March.”
STATS AND STREAKS
Michigan is headed to its fourth Sweet 16 in six years. … Gray wound up averaging 31 points in two NCAA Tournament games. … The teams combined for 41 fouls, resulting in 42 free throws.
BIG PICTURE
Houston showed remarkable poise down the stretch, led by a pair of seniors and three juniors in its starting lineup. But the cracks showed when Davis went to the foul line with a chance to ice it.
Michigan won its 11th straight game in the most dramatic of fashions, even without its top players at their best. Abdur-Rahkman finished 4 of 15 from the field and Matthews was 5 for 12.
UP NEXT
Michigan heads to the West Region semifinals in Los Angeles, where they will face the winner of Sunday’s game between the second-seeded Tar Heels and No. 7 seed Aggies.
___
More AP college basketball: https://collegebasketball.ap.org ; https://twitter.com/AP_Top25 and https://www.podcastone.com/ap-sports-special-events

UMBC basks in 15 minutes of fame as Cinderella…