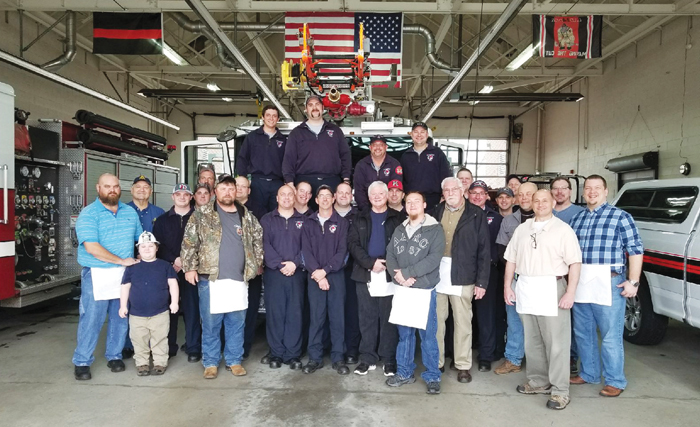 Cannon Memorial Lodge 626 showed thanks and appreciation to the Kannapolis Fire Department.

Cannon Memorial Lodge thanks the Kannapolis Fire Department
Thomas A. VanEtten Sr.
KANNAPOLIS — Recently, Brothers from Cannon Memorial Lodge 626 arrived at the Kannapolis Fire Department to show thanks and appreciation, present coffee and muffins, and to provide an award of recognition to the Fire Fighters of all five stations; officers from each were there to receive the snacks and certificates.
“These men and women risk their lives to keep us safe, and we are appreciative of them for it. Their sacrifice, bravery, and dedication do not go unnoticed. As Masons at Cannon Memorial, we were honored to choose the Kannapolis Fire Department as our 1st Quarter Award Recipients for all that they do in Kannapolis. Thank you to the officers of Kannapolis for their continued efforts to keep us safe, as well as to the Brothers that attended, and to French Express Coffee House in Kannapolis for supporting our efforts by supplying the muffins and coffee,” said Josh Mueller, Master of Cannon Memorial Lodge.
Masons in attendance were Joe Troutman, Bobby Brown, Brian Dixon, George Maxwell, Josh Mueller, Jerry Tucker, Jason Mathis, Troy Schiedenhelm, James Secoolish, Draven Vestatt and Thomas VanEtten Sr.

The Rowan Genealogical Society
The Rowan Genealogical Society will have their March meeting at Rufty-Holmes Senior Center on Tuesday, March 20 at 7 p.m. The program will feature an introduction into DNA testing, including a review of the top testing companies, what they offer and their costs. This will be an excellent opportunity if you have been thinking about having  your DNA tested or have been searching for a lost relative. All are welcome and there is no cost.

Piano Performance Festival
Ten students participated in the 2018 Albemarle District Piano Performance Festival of the North Carolina Music Teachers Association on March 3 at Pfeiffer University.
Each student performed three memorized works selected from the state official festival music list for judge Dr. Jeanine Skinner of Wake Forest. The repertoire is chosen from Baroque, Classical, Romantic, and Contemporary music periods.
Students earning a Highest Honor rating at Junior Level B and Senior Levels A and B may advance to the State Western Division Festival on March 24 at Queens University in Charlotte.
The following NCMTA teachers from our area had students participate in the contest:
Tina Brown of Rockwell and Marsha Carter of China Grove.
Brown’s students were Diego Corona, Hannah Davis and Ashley Drye.
Carter’s students were Addisyn Keen, Abigail Rodgers and Nadiya Wilson.

Rowan Redbuds
The next Rowan Redbuds Garden Club meeting will be March 22 at 1 p.m. in the Stanback Room of the Rowan Public Library, 201 West Fisher St. Jean Woods, president of the North Carolina Native Plant Society, will be the speaker. The public is invited to attend. There is no charge.

Let’s get Justin to India
Justin is battling Multiple Sclerosis. He has been accepted into a stem cell treatment program in India but must raise the funds he needs to get there.
From 4-8 p.m. on March 24, at the Salisbury Civic Center, Winks BBQ will provide the pulled pork bbq, chicken breast, baked beans, potato salad, bun, iced tea and water, dessert at $10 per plate
A silent auction as well as raffle tickets will be available. All proceeds will go to local and National MS Foundations.
Donate at https://www.paypal.me/SHFoundation
To learn more visit: https://www.facebook.com/TMCSHF

Southern Piedmont Woodturners
CONCORD — Meet at 5:30 p.m.  March 20 for demonstrations, presentations, show and tell, round robin woodturning events and a raffle. The meeting, open to the public, is held at Clearwater Artist Studio, 223 Crowell Drive, NW.
This month’s demonstrations include Use of Skew Chisel by Jack Reyome, Color/mixing Acrylics by Fred Connell, Natural Edge Bowls  by Rick Erickson, Finishing Technique by Vern Cockayne and Reciprocating Lathe by Steve Martin
For more information call Phil at 704-796-0803.

Ministry announces matching grant awards for Rampin’ Up! 2018
Baptist Children’s Homes of North Carolina (BCH) will use proceeds from its upscale resale store, Fancy Finds, to help fund $10,000 in matching grant awards for wheelchair ramps built during Rampin’ Up! 2018.
The grants will be awarded to churches participating in the ramp-raising marathon on April 28 and May 5. Rampin’ Up! is an outreach of North Carolina Baptist Aging
Since 2012, NCBAM and Baptists on Mission, an auxiliary to the Baptist State Convention of North Carolina, have partnered to build more than 850 wheelchair ramps. The average cost of materials for one ramp is $1,500. NCBAM Rampin’ Up! matching grants will be awarded up to 50 percent of the total cost of materials, with a maximum award of $750 per ramp.
For more information contact NCBAM at 877-506-2226. Find the matching grant application at www.ncbam.org/rampin–up!

Reynolda House Museum of American Art hosts Church exhibit through April 21
WINSTON-SALEM — Reynolda House Museum of American Art hosts “Frederic Church: A Painter’s Pilgrimage,” which will be on view through May 13. The exhibition is the first to explore Church’s paintings inspired by his travels to the Middle East and the Mediterranean and includes more than 50 paintings, oil studies, and drawings from the late 1860s through the early 1880s.
For tickets and a complete event calendar, including a symposium and talks on Frederic Church, visit reynoldahouse.org/church

Former U.N. Office of Internal Oversight Services investigator to speak
Friday, March 23: The Rowan County Tea Party will host Peter Gallo, a lawyer admitted to practice law in three countries and who holds a Master’s Degree in International Criminal Law.
In 2011 he became an investigator in the Office of Internal Oversight Services in the U.N. After experiencing the lack of accountability and failure to address widespread abuses in peacekeeping missions, he became an outspoken critic of the corruption in the U.N. and has testified before a congressional committee. Mr. Gallo will give a firsthand account of the abuses and corruption he witnessed.
The program is from 7-8:30 p.m. March 23 at Landmark Church, 1910 Mooresville Road.
Admission is free but a donation will be accepted to help cover expenses.