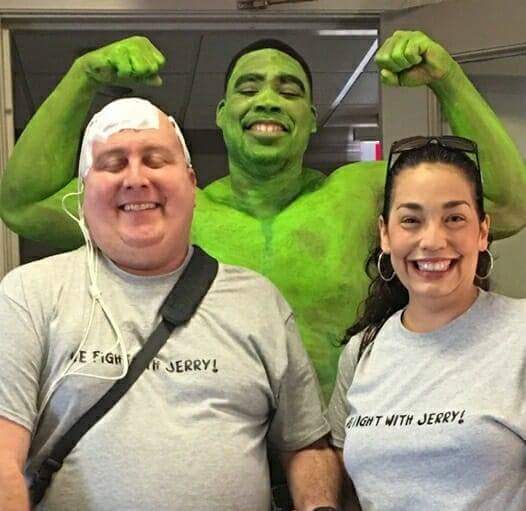 Jerry, left, and Raquel, right, at a Superhero Pancake Breakfast put on by the Fight For Jerry. Jerry passed away Friday morning. Submitted photo.

Jerry was the subject of two successful fundraising events, and the inspiration for local non-profit “The Fight for Jerry.” Money raised from two children’s pancake breakfasts went to support the Defour family. Jerry is married to wife of 26 years, Raquel, and the couple has three children.

Jerry’s fight started in December 2016, when he appeared to suffer a stroke. But when the tests came back, it was cancer. Specifically glioblastoma, a rare form of brain cancer.

In a previous interview, The Fight for Jerry founder Jennifer Williams said she met the Dufours when their daughters were both in Spotlight Dance Company together.

“Raquel and I became best friends right off the bat. They are some of the most amazing people you will ever meet,” she said.

She described Jerry as a loving, dedicated father and a “godly man.” Raquel, she said, is kind and caring. All of these qualities are reflected in their children.

“They’re literally the most giving people — and thoughtful, selfless people — I’ve ever met,” she said.

Williams said that, in the future, proceeds from the bi-annual breakfasts will go towards supporting families in need in Rowan County.

The Defours moved to the area approximately 10 years ago from Ohio, relocating due to Jerry’s job as a director of operations for a merchandising company based out of Mooresville. Jerry was forced to leave his job following his diagnosis.

Those who knew him described Jerry as a fighter. Alan Fowler, a member of First Presbyterian, said that Jerry defied every deadline given to him by doctors, and kept pushing for one more day with his family.

“Jerry has been fighting this thing for a long time,” Fowler said.

According to his obituary, Jerry died Friday morning at the Glenn A. Kiser Hospice House, and funeral arrangements were made with Summersett Funeral Home. Fowler said Jerry fought on, even in Hospice, before passing away peacefully at about 1 a.m. Friday morning.

Raquel shared the news with the family’s crowd of friends and supporters through Facebook.

“Heaven has gained another angel,” she wrote. “Jerry went home to be with God early this morning. He was surrounded by his family as he drifted peacefully into his new life.”

The news was met with an outpouring of grief, love and support from friends, family and community members.

First Presbyterian Church in Salisbury will hold a celebration of life memorial service Wednesday at 1 p.m. A reception in Lewis Hall will follow the service.