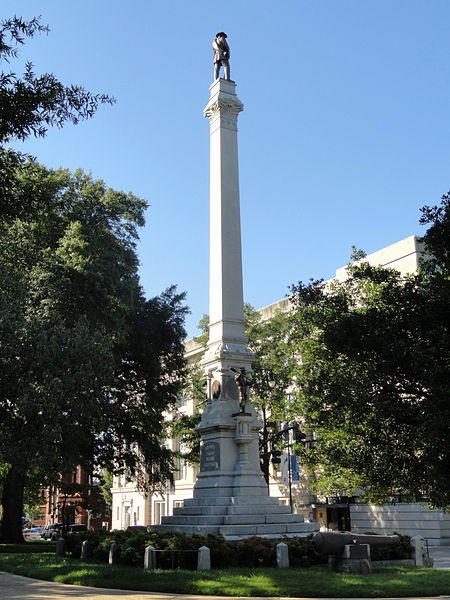 This Confederate monument located outside the N.C. Capitol was dedicated in 1895.

The N.C. Historical Commission is presently considering moving three Confederate monuments from the Old State Capitol grounds to the Bentonville Battlefield Historic Site in Johnston County. This would be a serious mistake and have tremendous implications for generations to come.

This is not an issue of where best to locate precious artifacts but a vital matter of preserving public memory. The danger of a decision to remove them is that it represents removing the Civil War era from the great flowing river that is our state’s singular history.

You know as well as I do that our state’s Civil War history is unique because this period sits at the center of North Carolina’s story. From the outset we were called “a vale of humanity between two mountains of conceit” and “The best poor man’s state.” In the nation’s early life, we were often referred to as a “yeoman republic” —  having the largest number of white farmers in all the Southeastern states, owning the least number of slaves. This was a plain folks’ state.

Some context from the Piedmont county where I reside, Davie County:

About a dozen years prior to the Civil War, 85 percent  of the white families didn’t own a single slave. Of the 15 percent that did, the majority owned one or two slaves. In February 1861, Davie County voted against secession. It was not until Lincoln demanded 75,000 troops that our vote changed.

The old North State gave the most men to the War Between the States, and it suffered the war’s most casualties. A significant contribution to public memory is made by these monuments that help us convey this era to the largest audience by remaining visible just where they now stand.

Every year thousands of school children make trips to Raleigh as do thousands of tourists. It’s home to our state museums as well its library and archives. Not every child in our little town gets to go there, but each one should.

The impulse to remove the monuments is cleverly bureaucratic. In truth, it is politically expedient, catering to hurt feelings to dodge controversy — exiling the monuments to a place where only Civil War buffs will appreciate them.

This is not what we expect of the guardians of our history. The stories that history presents are not always pleasant and neither are the tasks faced by those charged with “keeping the tablets.” Many episodes in history are painful and many make us proud — but all are essential. None can be expunged.

If history and its record, its relics and its potential forums for debate are not guarded by a body of diligent sentries, then how do we differ from a China a Russia or even the Taliban?

Here in Cooleemee, our historical tasks are on a much smaller scale. Last year I retired after 22 years as director of the Textile Heritage Center. My husband, Jim, and I worked as part of this community’s effort that began in 1989 to preserve its proud heritage as a cotton mill town. We created Discovering Our Heritage, a kids program that taught a special local history lesson every year, for each class —pre-K through fifth grade. For developing these programs, including two still-operating heritage museums, the Cooleemee Historical Association was awarded the state and nation’s highest awards.

Yet this work brought on its own pressures, at times, even intimidations. There were controversies about the contents of the museums displays — should “unpleasant history” be left out? Tackling slumlords who put drug dealers into historic mill homes brought threats. Then came a lawsuit against our society by a power company — our only act, having written a letter to the federal government about our historic river commons. Although eventually dismissed by the court as frivolous, the lawsuit cost us dearly in personal and legal costs for many years.

History must be preserved, and if it is, it will always be debated. Congress mandated the National Park Service “resolve” the Civil War’s cause by edict. But try to convince the descendants of those non-slave-holding whites that their ancestors honorably went off to war to fight for slavery. Edicts, mandates and dictates can never cut off debate if historical records, documents and monuments exist.

And, what’s to say that 10 years hence a movement will not develop to close all the state historic Civil War sites? I was a teenage participant in the 1960s civil rights movement. I can just hear someone argue, “Why should we waste taxpayer money to glorify a slave owners’ rebellion hell-bent on preserving a rotten system?” Then, whose feelings will the commission be unwilling to hurt?

Keep those monuments right where they are.

Lynn Rumley is a resident of Cooleemee.