Dr. Michael Bitzer: Is it time for Republicans to panic? 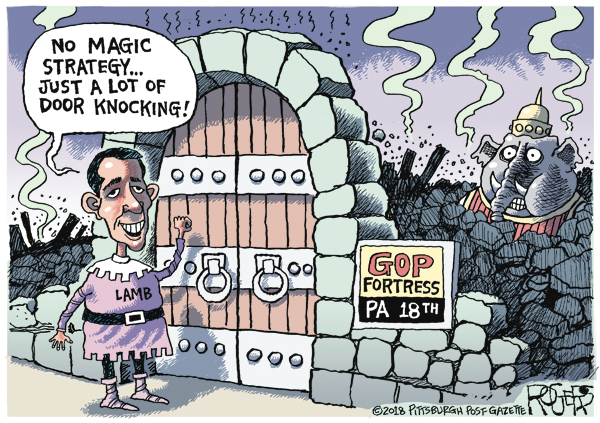 The Democratic wave crashed into Pennsylvania’s 18th congressional district, and Republicans have begun the appropriate stage in a mid-term election year that’s moving against them: in a phrase, “batten down the hatches.”

In a leaked email from the N.C. State House GOP political director, the “predictions” were that if North Carolina experienced a similar wave as the one that occurred in Pennsylvania, Democrats would not only capture the lower chamber of the General Assembly, but have super-majority status. Needless to say, Democrats are making hay of the email.

I’m not surprised by the email, because the Pennsylvania 18th congressional election should be a significant wake-up call to Republicans: for a Democrat to win a district that gave Trump 58 percent of the vote just 18 months ago is not small feat. But while there could be some comparisons to North Carolina on various dynamics, I’m not sure the Democratic wave has turned into the kind of tsunami, as of right now, in this state that may be causing heartburn in the GOP ranks.

While there are various dynamics, such as voter registration and turnout rates particularly among Democrats, women, suburbs, younger voters and college educated voters that will be needed for a Democratic wave to happen, there is a close correlation to how President Trump performed in 2016 and North Carolina’s congressional and state Senate races, and to a slightly lesser extent, in the state House races.

So, the GOP email may be signaling the following alarm for Republicans in similar districts as in Pennsylvania: don’t expect a 58 percent win from two years ago to be enough of a barrier against the wave that may be cresting in the fall.

While there is greater concern for Republicans after Pennsylvania, I think the email was more focused on the need to develop sufficient war chests, since the fundamentals of this year’s mid-terms are definitely moving against the GOP.

Perhaps it was also a signal to wake up now and get your base voters energized about what could happen. But even with the amount of money spent in PA by the Republicans, no chest may be big enough this fall to counter what is looming on the horizon.

While there’s a need for collective action to protect their majority standings in both chambers of the state legislature, the fall campaign may come down to “every Republican for themselves.”

As far as Democrats are concerned, Pennsylvania’s contest shows that a suburban/rural kind of a district can be competitive, if Democrats have the right kind of local candidate who fits that district. That, along with several other dynamics, will need to play out in the Old North State as well for a successful blue wave.

The one fundamental that Democrats seem to be lacking so far in this state is the “generic” ballot advantage; both Meredith and High Point polls have the generic as a dead-even, unlike most national polls that give Democrats an advantage. That could change over the coming months, and if it did, it would signal that the state was following the national trends, giving even stronger headwinds against the Republicans in this blue-moon election cycle.

At this point, to predict that a chamber will flip from Republican super-majority control to Democratic super-majority control requires a tsunami-sized wave that we’ve never seen before, and while Democrats certainly have the wind at their back, I’m not sure we’re ready to declare a complete washout of Republican majorities in the General Assembly. But stay tuned for anything to happen; the winds are definitely blowing.