After tragedy, a Salisbury treasure is brought back to life 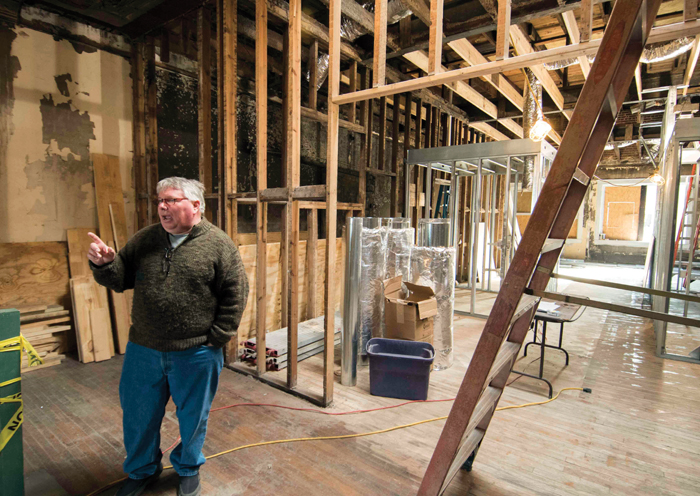 SALISBURY — As Michael Young approached the back of the room, he paused.

“This was the epicenter of the fire right here,” Michael said, gesturing toward the ceiling.

Michael was referring to the 2015 three-alarm fire that damaged a significant portion of the general store that replaced O.O. Rufty’s General Store — Okey Dokey & Co.

“There were probably four or five space heaters plugged in on a really cold winter day, and we found the space heaters, the hot plate with the spatula still attached, the refrigerator stocked with food, a microwave, the toaster oven and all that stuff up there all melted together,” Michael said. “It was pretty bad.”
Due to the extent of the damage caused by the fire — which was deemed accidental, the result of an electrical wiring malfunction — Okey Dokey & Co. was never able to reopen.

“And, as a result — with no heat on, electric on, gas on — it deteriorated pretty rapidly. So when we got (the building) there was a lot of water leaking from the roof and it was on the edge,” Michael said.

“I look at it as, ‘Where can you buy this much land, floor, walls and roof so inexpensively?’” Michael said.

“Diane is a licensed North Carolina general contractor and (her) background is in preservation technology, so she knows historic preservation,” Michael said. “And she also goes out on occasion when there’s a huge project, where millions of dollars are involved and the bank is nervous about the developer screwing up their tax credits. So she’ll go through and say, ‘Don’t do that, don’t throw that door away.’”

Diane has been the downtown manager of Concord Downtown Development Corporation since 2010 and has previously worked for a number of construction companies.

Diane and Michael have also renovated a few other downtown spaces, including the building that now houses Smoke Pit and a third-floor apartment above Spanky’s.

But Michael said the O.O. Rufty’s project is the biggest he and Diane have done with their own financing.

“It works because we are just doing the project ourselves, so we’re not paying a (general contractor). And we got a bank (F&M) to work with that can combine the acquisition loan and the renovation loan,” Michael said.

Michael and Diane bought the building last summer and Michael said they hope to have it completely renovated by July.

“We play with live ammo,” Michael said. “When you’re borrowing this much money, you don’t sit around.”

Michael said the building — which is about 12,400 square feet in total — will have six apartments, one retail space and thirty climate-controlled mini storage units in the basement.

“And that will be a first. I don’t know if there other climate-controlled units in the city, but this will be the first one downtown,” Michael said.

Michael said the market for the units would be “people who have furniture that they don’t want in a freezing environment or high-humidity environment.”

The one retail space, which will be about 2,000 square feet, will be in the front portion of the building’s ground floor in the storefront facing Innes Street.

Michael said they have gotten “a lot” of inquiries about the retail space but that they haven’t narrowed it down yet.

The back portion of the ground-floor space will be split into two apartments. The apartments will have a separate entrance so residents won’t have to go through the retail space to access their units.

There will also be an apartment in the basement and three apartments on the upper levels.

Michael and Diane will be living in one of the three upstairs apartments, which Michael said he is excited about.

“If I don’t have to mow another yard, I’ll be a happy guy. That’s my plan,” Michael said.

A future for an “iconic” building

As a resident of Salisbury for the last 33 years, Michael remembers both O.O. Rufty’s and Okey Dokey & Co.

“This building is iconic,” Michael said. “It was hard to see the building catch on fire.”

But Michael said he’s excited to bring it back to life and that, although the construction process has been challenging, “everything has gone right.”

“(Pete) Bogle’s our architect, and he’s done historic preservation projects. So he knows what he is doing,” Michael said.

Michael said the size of the building has sped up the renovation process.

“We got the plumbing guys plumbing apartments. We’ve got the electrical guys engineering the electrical work. It’s all happening simultaneously. But it’s a big building, so it’s not like people are working on top of each other,” Michael said.

He said the newly constructed stair tower and the elevator tower are nearly complete and that contractors are building walls for the upstairs apartments.

When asked about what he thought the significance of the project is, Michael said he and Diane “could have done a project like this in any community.”

“But to save an iconic piece of Salisbury history, to be able to do it in our hometown, and for it to be a sound financial investment is a triple whammy,” Young said. “When completed, we think it will be very gratifying and we are excited about downtown Salisbury’s future.”

The O.O. Rufty building is located at 126 East Innes Street.