The Bushmaster story: Guns, private equity and the legacy of Newtown 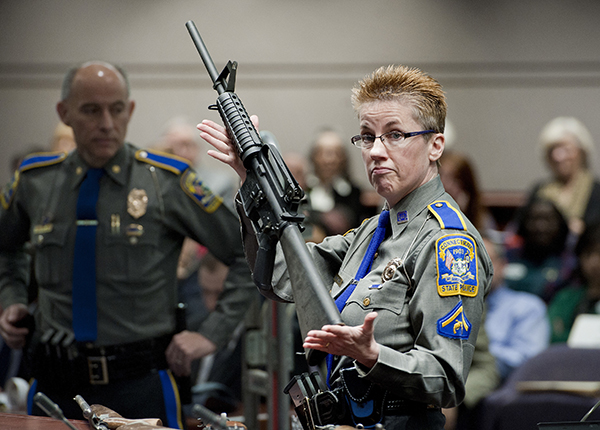 Firearms training unit Detective Barbara J. Mattson, of the Connecticut State Police, holds up a Bushmaster AR-15 rifle, the same make and model of gun used by Adam Lanza in the Sandy Hook School shooting, for a demonstration during a hearing of a legislative subcommittee reviewing gun laws, at the Legislative Office Building in Hartford, Conn. in 2013. AP Photo/Jessica Hill

For 26 years, the billionaire Stephen Feinberg, 57, has run Cerberus Capital Management, his highly successful $30 billion private equity firm. He’s made millions for investors by buying up companies, turbocharging their businesses and then spinning them off in public offerings.

Yet when Feinberg dies, the first paragraph of his obituary will surely focus on something else: the fact that the assault rifle used to massacre 20 children and 6 adults in Newtown, Connecticut, in 2012 was made by a Cerberus company.

The gun was a Bushmaster XM-15, Bushmaster’s entry in the fast-selling semi-automatic AR-15 category. Feinberg, a gun enthusiast, bought Bushmaster in 2006 for $76 million. It was his initial foray in the gun business. Over the next few years, Cerberus bought 12 more gun companies, the best known of which was Remington Arms Co. Inc., for which it paid $370 million in 2007.

It was a classic roll-up strategy: buy a handful of companies in one industry and cobble them together to create a behemoth that would be attractive to investors at IPO time. Feinberg named his firearms mash-up, which by 2008 was indeed the biggest gun company in the country, the Freedom Group.

An initial public offering never happened. Instead, Remington Outdoor Co., as the company is now known, went bankrupt. It will be turned over to its creditors, probably this week.

From a business standpoint, the main thing Cerberus proved is that the gun business really isn’t conducive to the kind of small company roll-up that has been so successful in the hardware and drugstore businesses. Gun company cultures are too individualistic and each company’s guns have their own peculiarities.

For instance, when Cerberus bought Bushmaster, the gun maker was located in Windham, Maine, where it stayed the next five years thanks to an agreement it struck with the previous owner. But as soon as that agreement expired, Feinberg moved Bushmaster’s operations to Ilion, New York, which had space in a Remington factory. Almost immediately, gun owners began complaining about the quality of both Bushmaster and Remington guns. A big part of the problem was that the Bushmaster factory workers – many of whom had been with the company for decades – had been left behind in Maine. And the new workers didn’t have the same feel for a Bushmaster gun.

Bushmaster and Remington had been revered brands among gun owners. By degrading them, Remington Outdoor caused gun buyers to care less about brands; they looked instead at the features of a gun they wanted.

“Feinberg thought that by consolidating manufacturing of all product lines at the Remington plant he would achieve economies of scale,” said Michael Weisser, a former gun retailer who is now a gun safety advocate. “That would have meant something if they were making products consumers wanted.”

What Cerberus did right, again in a business sense, was market guns, especially the AR-15. Feinberg helped popularize assault weapons, making them a must-have purchase for a certain kind of gun owner.

The first gun company to make an AR-15 was Armalite in the early 1960s, but it took over three decades for the gun to become a major factor in the business. Only when the culture of hunting began to be eclipsed by a more militaristic gun culture did the AR-15 become popular. At least part of this was due to gun advertising, which stressed both militarization and masculinity.

And no company took this advertising as far as Remington Outdoor. In 2010, it began an ad campaign that showed a picture of a Bushmaster XM-15 in a shooting position. The headline read: “Consider Your Man Card Reissued.” Another ad had the headline, “Forces of Opposition, Bow Down,” with a picture of an AR-15. Remington called one of its guns the Remington ACR – for Adaptive Combat Rifle.

Remington Outdoor was brilliant at coming up with add-ons, which Stephen Witt described in New York magazine as “modular lethal Lego sets whose component parts could be updated for years after the initial purchase.” Witt added that the company “regularly introduced must-have innovations — threaded triangular barrels, polarized scope filters, lightweight polymer stocks — and customers rushed to outfit their guns with the latest in firearms tech.”

Although mass shootings were a regular occurrence during the time Feinberg was assembling his company, nobody paid much attention to what he was doing. That all changed after Adam Lanza went on his killing spree at the Sandy Hook Elementary school in Newtown using a Bushmaster assault rifle.

Feinberg had spent most of his career avoiding the media, but now he was awash in bad publicity. In response, he said he would put the company up for sale because Cerberus didn’t want to engage in attempting “to shape or influence the gun policy debate.” (This was an absurd rationale; the National Rifle Association had long described Cerberus as a “strong supporter of the Second Amendment.”)

In any case, Feinberg was never able to get the price he wanted, so instead of selling the company, he decided to rename it, calling it Remington Outdoor instead of The Freedom Group. Important institutional investors, led by the California State Teachers Retirement System, nevertheless demanded that Cerberus remove their exposure to the gun business, a process that took two years to complete.

In 2013 and 2014, fat years for the gun industry, Remington Outdoor barely made any money. Every time there was a mass shooting, journalists checked to see if a Cerberus gun was used; when it was, as in the 2015 terrorist attack that killed 14 people in San Bernardino, California, Feinberg was usually subjected to another round of outraged criticism.

It’s likely that Cerberus lost money on Remington Outdoor, though one can never be sure when private equity is involved. But in the end, it’s not lost money that most hurts Feinberg’s reputation. It’s the knowledge that his vaunted private equity firm, with its track record of turning companies around, was seen by the gun industry as having no idea what it was doing.

What also must hurt is the knowledge that there are big investors who will never again put money in a Cerberus fund. And that there are citizens who will always associate Feinberg with the Newtown mass shootings.

It’s not a legacy to be proud of.

Nocera is a Bloomberg View columnist. He is the co-author of “Indentured: The Inside Story of the Rebellion Against the NCAA.”