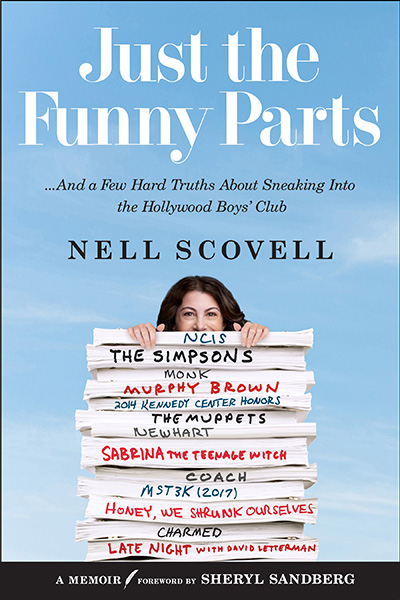 Just the Funny Parts ... And a Few Hard Truths About Sneaking into the Hollywood Boys' Club

When Nell Scovell started writing for the David Letterman show in the early 1990s, she was the only woman in the writers’ room.

It was her dream job, but she left after a few months.

Her experiences on “Late Night” – some of which she described in Vanity Fair in 2009 – were soul-crushing. Half of Letterman’s assistants appeared to have been sleeping with the boss. Not Scovell, who had a hard time being taken seriously by her male colleagues.

But working for the late-night legend looked swell on Scovell’s résumé. And now it’s scribbled on the cover of her memoir, “Just the Funny Parts,” amid a tower of her scripts for “The Simpsons,” “Murphy Brown” and other popular TV shows.

Her memoir’s subtitle is “And a few hard truths about sneaking into the Hollywood Boys’ Club,” and she relates a Superfund site’s worth of sexist garbage for anyone brave or foolish enough to follow her exhausting career path.

Scovell’s résumé is dizzying, frantic even. Now 57, she seems to have worked on more shows than most people have watched. It’s never clear whether this moving around is the result of miserable working conditions, customary Hollywood protocol or Scovell’s eternal quest for something better. She helped pave the way for more female writers and served as their champion, although women are still woefully underrepresented on most shows.

Scovell worked with Garry Shandling, the Muppets and Facebook COO Sheryl Sandberg. (She was the co-author of Sandberg’s best-selling “Lean In,” and Sandberg wrote the foreword to “Just the Funny Parts.”) Scovell created “Sabrina the Teenage Witch” and served as co-executive producer on “Charmed.” So, a talent for witchcraft. She also crafted White House Correspondents’ Association dinner jokes for President Obama, such as this one: “There’s someone who I can always count on for support: my wonderful wife, Michelle. We made a terrific team at the Easter Egg Roll this week. I’d give out bags of candy to the kids, and she’d snatch them right back out of their little hands.”

Scovell could behave as stupidly as the next naif, and her candor is a tonic. She sometimes sounds unaware of sexism’s subtler forms. She writes that in the 1980s, as a staff writer for the revered “Spy” magazine – the publication that branded Donald Trump a “short-fingered vulgarian” – “baby-sitting was cool”: She had looked after co-founder Graydon Carter’s children.

Uh, not cool. That’s not why she went to Harvard, and bets are Carter never asked male staffers to play with his tykes.

“Funny Parts” includes lots of stories and a tonnage of names dropped, but it still seems that Scovell’s on a quest. Larded with aperçus and advice, this is another one of those girlfriend memoirs — a femoir — the sort mastered by Tina Fey, Amy Poehler and Mindy Kaling that sell brilliantly and are devoured in an afternoon. It’s a very jokey, often charming book, but Scovell also seems to be in search of that home run, a “30 Rock” to call her own, which makes the reader root for her all the more.

Months after leaving White House, Scaramucci gets a book…