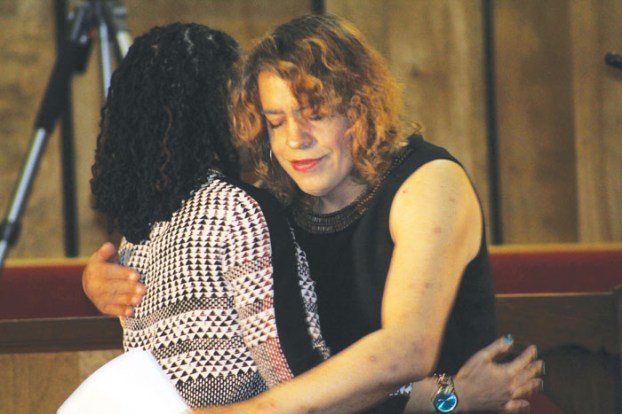 KANNAPOLIS — As the pews of First Baptist Church in Kannapolis filled for the Poor People’s Campaign Town Hall, Jade X. Jackson gave the room a charge.

“It’s called the Poor People’s Campaign: A National Call for Moral Revival,” said Jackson. “What that means is something’s not moral, that it needs to be changed to be moral.”

The Thursday evening town hall meeting, organized by Doshia James and N.C. House District 83 candidate Gail Young, was held with a purpose. People were encouraged to vote for government officials who will take action for the 40.6 million people living in poverty across the United States.

Several would speak about these struggles that mean economic hardship for many.

Amos McClorey, NAACP District 3 director, spoke of his experience with what he sees as systemic racism in Concord. Minorities are marginalized by policy and procedure at governmental and institutional levels, he said.

McClorey said that following 1971 race riots in Concord, some 72 ordinances were enacted to prevent grocery and convenience stores from returning to the affected area. As NAACP president in Cabarrus County, he said he worked to see all those ordinances removed.

But the stores haven’t returned, he said.

“(The riot) was 47 years ago, and you still can’t buy a gallon of milk in that community,” said McClorey. “What do we need? … We need change. If we don’t change, that means we’re conceding and we’re giving up. It’s time to elect people who say that’s not right. Let’s change.”

Others spoke about their experience with poverty. Coletta Sharpe and Sheryl Gray described neighborhood-wide destitution and about the importance of giving people a “hand up” rather than a handout.

Maya Jones spoke of the devastation left by Hurricane Maria on the Caribbean island of Dominica.

“Why should we care about Dominica in North Carolina? It’s the canary, and the whole world is a coal mine,” said Jones. “Puerto Rico was a canary. New Orleans was a canary. Houston. Canaries.”

Jones said voters should “get rid of elected officials who say climate change is not a real thing.”

“When you lie about things that are scientific, you are living in cowardice, and we don’t have any more time for it,” Jones said.

Before Jackson invited people to become involved in campaign committees, the Rev. Anthony Smith of Mission House Church of Salisbury spoke about how all these struggles affect Rowan County’s minorities and the poor.

“This Poor People’s campaign is an invitation to ask new questions in our own cities, in our own county regarding poverty, racism, environmental issues, questions that go beyond blaming and criminalizing the poor,” he said. “In our own county, we have … county commissioners that paint a picture of poverty from Clancy Hills.”

Smith referred to comments made by Rowan County Commissioner Craig Pierce in early 2016, in which he blamed economic stagnation on the county’s large number of people receiving government aid.

“There are policies and racist politics that demonize and demean the poor in our own communities,” said Smith. “We’ve got to change the story.”

SALISBURY — As of July 2007, the world has been more urban than rural, according to a study by the Population... read more

High school football: Hornets pour it on in second half to claim state championship game