Pie in your face! North Hills Christian students celebrate their mission to Feed the Hunger 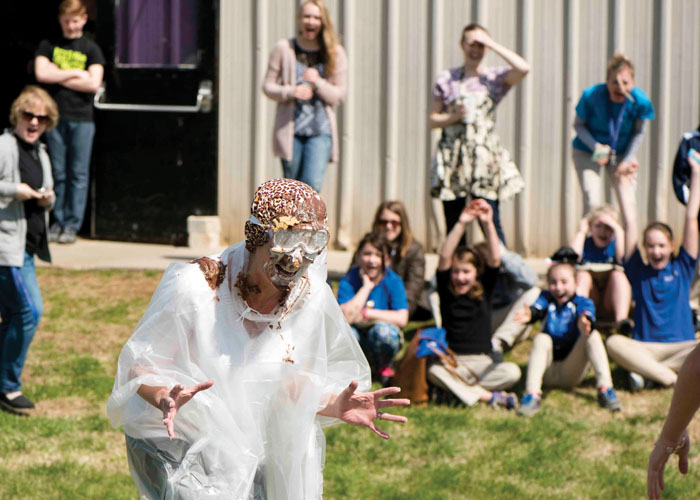 North Hill Christian School Executive Director Maria Lowder reacts to getting a pie in the face Friday afternoon. Students were rewarded for going over their fundraising goal to raise $8,200 for Feed the Hunger. Jon C. Lakey/Salisbury Post

SALISBURY — It was Raegan Lowder’s 15th birthday Friday, and she lived out every teenage daughter’s dream: She threw a pie in her mom’s face.

And as she wound up and delivered, Raegan was cheered on by the student body of North Hills Christian School, which was celebrating its Feed the Hunger effort that raised roughly $8,200 and packed 30,000 meals.

North Hills Executive Director Maria Lowder, Raegan’s mom, had set a goal of raising $7,500 for the project. If the school exceeded the goal, she offered to take a pie in the face.

Lowder delivered on her promise Friday afternoon in the grass outside the gymnasium where students had packed meals.

Raegan did not waste her chance. She pulverized her mother with the pie and sent its shell and all the filling flying into the air.

“That was brutal,” one North Hills student said.

A happy but messy Maria Lowder said the kids were inspirational and it was for a good cause.

“The pie actually went through the goggles, she threw it so hard,” Lowder said.

For the record, the pie was chocolate.

Raegan is a freshman. The junior class, which raised the most money, was given the honor of choosing who should throw a pie in Lowder’s face. The juniors appreciated the family dynamics of allowing Raegan to do it, especially on hearing that Friday was her birthday.

The Lowders were not the only ones on the pie-throwing stage Friday.

Junior Chandler May was chosen to push a pie into the face of Upper School Principal Matthew Weaver. Because Weaver loves coffee, Spiritual Life Director Dana Rollins topped things off by dousing him in cold coffee.

“It was fun,” Raegan Lowder said, “cause me and my friends got to hang out a lot and laugh.”

Even the junior kindergarten students helped with the packing, standing on chairs to reach the food items being assembled.

Constance McGrail, a high school teacher at North Hills, was the adult leader of the Feed the Hunger project through the school’s Junior Civitans.

She said students raised the $8,200 in one week, and a lot of what was collected represented students giving on their own. Just 28 cents was good for one meal.

“They realized they had the ability to make a difference,” McGrail said.

This was the second year North Hills participated in Feed the Hunger. The Burlington-based organization brought seven staff members and volunteers to the school Friday. The meals packed by the students will to go the needy in Haiti and Harlan, Kentucky, and maybe a few other places, McGrail said.

She said the program feeds both spiritual and physical hunger and described it as more than just humanitarian relief.

In their Feed the Hunger Pack-a-thon on Friday, students accomplished all the meal packing in about three hours.