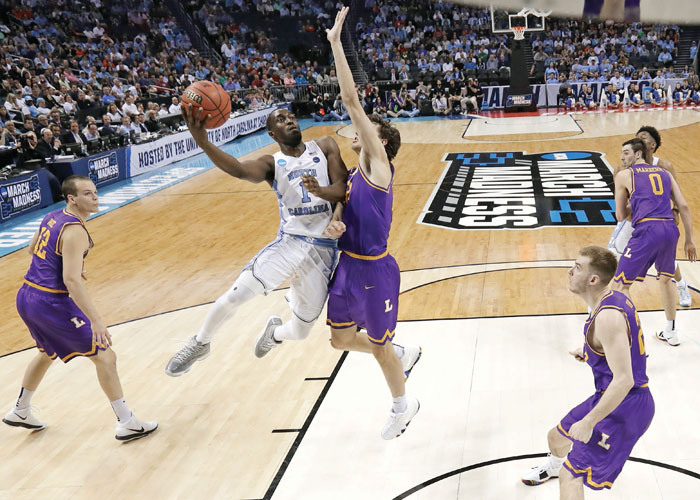 CHARLOTTE (AP) — Kenny Williams was a bit player in North Carolina’s run to the national title game in 2016, then watched last season from the sideline due to a knee injury as the Tar Heels won a sixth NCAA championship without him.

They need him to be every bit as good as he was Friday to reach a third straight Final Four.

Williams scored 18 points to help UNC beat Lipscomb 84-66 in the first round of the NCAA tourney, a strong start for a guy carrying a heavier load this time in a small-ball lineup.

“I was excited all week about coming to play my first game with heavy minutes in the NCAA Tournament,” Williams said. “This is what you look forward to growing up, so I was a little bit more excited about that.”

UNC (26-10), the No. 2 seed in the West Region, won its 12th NCAA game in 13 tries going back to the 2016 tournament that ended with a title-game loss to Villanova. Williams was a freshman that year, buried on the bench behind veteran talent and playing just 8 minutes with four appearances in those six games.

He was set for a bigger role last year before suffering a torn meniscus in his right knee in February 2017. Williams needed surgery and didn’t play again, though the Tar Heels went on to beat Gonzaga in Glendale, Arizona, for the title.

On Friday, in his first major NCAA Tournament minutes, he looked right at home. He made 6 of 8 shots and 4 of 5 3-pointers in 28 minutes, helping the Tar Heels gradually take control on the way to shooting 52 percent with nine made 3s.

“When we execute our offense, we’re getting guys open and we’re setting solid screens, and guys are able to come off in a rhythm and knock it down,” senior point guard Joel Berry said. “Today Kenny didn’t force any shots. Any time somebody drove he was ready to shoot.”

Playing in their first NCAA tourney, the 15th-seeded Bisons (23-10) shot well at the start and held an early six-point edge. They led 33-31 with fewer than 4 minutes left in the first half before North Carolina went on a 12-1 run to lead 43-34 by the break.

UNC increased that margin to 18 by midway through the second half.

“It was going to take a magical performance from someone like us to beat someone like them,” Lipscomb coach Casey Alexander said. “We didn’t get that, so we were fighting uphill all afternoon, it felt like. I thought our guys really competed.”

Lipscomb: The Bisons beat Florida Gulf Coast in the Atlantic Sun Conference Tournament. Alexander — roaming the sideline as a head coach in the tournament for the first time — said he wanted his players to savor the experience even as they faced a daunting challenge. They hit from outside early to stay in it, but missed their last nine 3s before halftime as UNC took control.

UNC: The Tar Heels were taking their first step toward becoming only the third repeat champion since UCLA’s record run of seven straight ended in 1973. It certainly helps that they had again earned themselves a friendly opening site; UNC improved to 34-1 in NCAA games played in its home state with the last loss coming in 1979.

“We have good players who have really played well, the fans do help us,” coach Roy Williams said. “And I’m willing to see if we can pass a law that says we play all NCAA games here. I’d be willing to go for that.”

UNC senior Theo Pinson flirted with a triple-double, finishing with 15 points, 10 rebounds and seven assists in 35 minutes. He also had a block and a steal.

Bisons top scorer Garrison Matthews (22.1 points) struggled to just eight points on 3-for-14 shooting. Sophomore Kenny Cooper scored 14 points to lead Lipscomb, including a 3-for-4 showing from behind the arc after making 11 of 55 (20 percent) on the season.