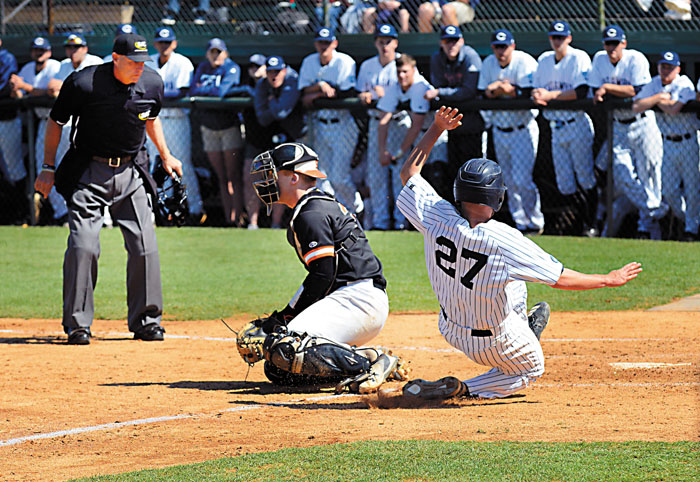 But Catawba plays home games in a bandbox called Newman Park. There are times when pitching and defense take a back seat, and Indians have to slug their way to victory. Saturday was one of those days.  They beat down the fences, topped Tusculum 19-10 and 13-12 and stayed in the thick of the race in the South Atlantic Conference.

For all its struggles through February and March, Catawba (13-16, 8-4) is only one game off the pace in the SAC. Wingate and Carson-Newman are tied for first at 9-3.

“We won a series today, beat a really good team, and as long as we can keep winning series, we’re going to be OK,” Gantt said. “At the same time, I know we were lucky and we were fortunate to win two today. Our pitching wasn’t good and we played some bad defense. All I can say is thank God we hit. Guys kept getting on base, and if you get on base often enough, you’ll eventually get those key hits.”

Catawba absorbed a lopsided 10-1 loss to Tusculum on Friday. Catawba was held to four hits and was shut out until the ninth.

“Their pitcher did a great job of mixing it up, and we weren’t picking up the spins at all,” Gantt said. “He executed his pitches all night.”

Saturday was a different story. Daylight helped. The Indians regrouped. In the bottom of the first inning, Kyle Smith homered, then Chance Bowden homered. When the dust settled after the first, Catawba led, 7-0.

“I didn’t hit at all Friday,” Bowden said. “Very good pitcher and I was in bad counts all night. But Saturday was a new day. We got it started early, got a bunch or runs right away, and that was big for us. Everybody got on board, and we just rolled with it.”

Tusculum smacked five homers in the first game, knocking out Catawba lefty Michael Elwell after four innings. Clay Young (3-3) pitched the rest of the way. He struck out six and held the Pioneers (12-13, 6-6) to two runs over the last five innings.

Tusculum got as close as 11-9, but Lee Poteat’s singled triggered a four-run fifth that moved Catawba out of danger. All-American Luke Setzer’s three-run blast in the sixth finally knocked out the Pioneers.

“Heath has been huge,” Gantt said. “He never goes to the plate trying to be a hero or trying to hit that three-run homer with nobody on base. He’s just trying to get on, and he competes on every pitch. He’s never nervous or anxious and he’s never afraid. He has great hand-to-eye coordination. If you make a mistake, he’ll hit it hard.”

A junior, Mitchem has been a relief pitcher throughout his college career, but he batted over .500 as  high school senior at Carson when he was the Rowan County Player of the Year. Gantt said he saw in fall intrasquad games that the Indians might need Mitchem’s bat this season. He’s been amazing. His on-base percentage is .541.

Catawba got off to another brilliant start in the second game and led 6-0 after an inning and by 13-4 after two innings.

It still wasn’t routine. Catawba had to hang on for the one-run win.

“We showed some guts,” Gantt said. “We ‘re good enough to do it. Guys just have to believe they can do it.”

Reliever D.J. Laxton, a very good athlete, made a diving catch of a soft liner that would have been a tough play for the infield for the second out in the final inning. If Laxton hadn’t made that snag, Tusculum might have come all the way back from a nine-run deficit.

“D.J. might be the only guy on our staff who makes that play,” Gantt said.

Connor Johnson (1-1) was credited with the relief win, even though he didn’t have his good stuff. The veteran lefty allowed eight hits while notching eight outs. Laxton earned his second save, as much with his glove as with his arm.

Smith, the powerful leadoff man, launched his second homer of the day in the nightcap. Bowden, who is batting .390, cracked his third long ball of the afternoon. Mitchem was 1-for-2 with two walks and two more runs. Infielders Jacob Nester and Joe Butts had two hits each. Mike Manoogian smacked a bases-clearing double as the Indians constructed their big lead.

Poteat put a lot of balls in play and drove in six runs in the doubleheader.

“We moved on, we forgot about a really bad performance, and we got a sweep that we needed,” Bowden said. “Great weather and a great crowd. It was a long day, but it was a fun day.”

Officially, the Indians played for 6 hours, 20 minutes on Saturday, and that doesn’t include all the work they did postgame and pregame.

They’ll get to rest a little now. Catawba won’t play again until it travels to Mars Hill on March 23.

“We can use the down time, especially Morrison,” Gantt said. “He’s caught a lot, but he still had enough left that he got some borderline pitches for our pitchers today. Now he can rest a little bit, and we can regroup as a team a little bit. We’ve played a lot of baseball in the last few weeks, and we’ve been playing against good teams.”