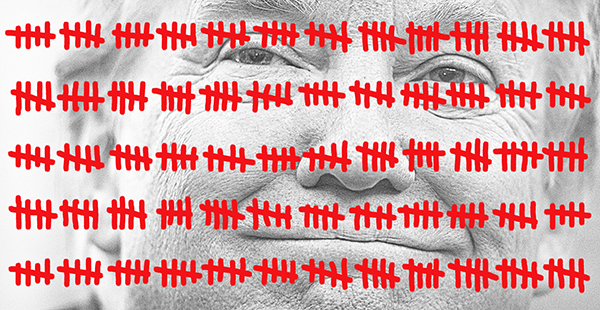 It’s a journalistic conceit of the Trump era — every day feels like a week, every week like a month, every month like a year, and so on until a four-year term feels like a lifetime. “What A Year This Month Has Been,” declared HuffPost on Jan. 31, in a typical sample of the genre. Good thing February only had 28 weeks this year.

President Trump comes at you fast, and the whiplash of firings, tweets, shake-ups, indictments and alternative facts can be a lot to take. That’s why Amy Siskind’s “The List” is such an unusual and essential book. It’s hard to read it straight through, except that’s the whole point.

Immediately after Trump’s election, Siskind began a weekly online compilation of all the deeds by the incoming administration – the “Trump regime,” she calls it – that were, in the parlance of the resistance to which she dedicates her book, “not normal.” Every norm broken, every conflict of interest flaunted, every institution degraded, every truth casually disregarded: Siskind wants us to remember them all. She fears the risks of forgetting, of just letting things slide.

The first week’s list (Nov. 13-20, 2016) had nine items. The second week had 18. The third featured 26, including Trump’s tweets about “millions” voting illegally and the continued chants of “lock her up” at a Trump rally in Cincinnati. Soon, each week’s list swelled to more than 100 items. “The List,” in book form, attempts a compressed history of Year 1, a year that Siskind contends undercut America’s freedoms and values bit by bit, thus requiring “a trail map for us to follow back to normalcy and democracy – a journey, sadly, I suspect will take years if not decades to travel.”

Siskind is not subtle about her mission. When the tagline for your website is “This is how democracy ends,” virtually everything you see is scandalous. She overreaches at times, yet there is power in the accumulation, repetition and relentlessness of “The List.” As Noah Feldman writes in “Can It Happen Here?,” a new essay collection edited by his Harvard Law School colleague Cass Sunstein, “Civil society actors are the first and most public to say dramatically that democratic structures are in danger … [they] think of themselves as sentinels.” And the role of the sentinel, Feldman explains, requires “some aggressive outrage,” even a “paranoic bent.”

Siskind is up to the task.

Even for dedicated news junkies, it is remarkable how much we can forget, in the shock of the moment, about the previous shock of the moment. Reading “The List,” I realized I’d forgotten that Trump went out of his way to give the announcement of his Supreme Court nominee a reality-television, who-will-he-pick vibe (Week 12). I’d forgotten about the insidious incompetence of a $2 trillion double-counting error in Trump’s 2018 budget proposal (Week 28). I’d forgotten that Trump chose his son Eric’s wedding planner to oversee federal housing programs in New York (Week 31). And I’d forgotten about Kellyanne Conway’s invocation (Week 12) of the Bowling Green Massacre (Week Never).

But “The List” also forces its readers to reconsider things they remember too well and to wonder why. The dismissal of White House communications director Anthony Scaramucci, for instance, gets one sentence in this book, and that is really what it deserves. “[John] Kelly asserted his authority as chief of staff on Monday, firing Scaramucci immediately,” Siskind writes, and her spare phrasing injects perspective into an event that consumed the Washington press for days.

There are moments when Siskind encompasses too much, when her comprehensiveness veers toward indiscriminate. It doesn’t much matter, for instance, that GQ labeled Trump “the laziest president in American history” or that CNN’s Fareed Zakaria worried aloud that the United States was “becoming irrelevant” on the international scene. “The List” is effective when it catalogs fact, not opinion.

A few weeks into her effort, Siskind begins prefacing the weekly rundowns with her own analytic summaries, which are some of the least enlightening portions of the book. “Trump has lost control of the narrative,” we learn in Week 20. The following week, he still “struggled to take back the narrative.” Twenty-one weeks later, the president remained “unable to control the narrative.” (Reminder: “The narrative” is a made-up thing.) Every other week is described as the “most alarming” or “worst” or “most heartbreaking” of the Trump era. And Siskind attributes assorted Trump-related reversals – such as the fall of Fox News icon Bill O’Reilly or the early legislative struggles of Trump’s health-care proposals – to the anti-Trump resistance, without much explanation.

“The List” is most useful in its ruthless deployment of repetition and specificity. For weeks on end, Siskind reminds readers that Trump had accused President Barack Obama, without evidence, of wiretapping Trump Tower. “Five weeks have passed. … Six weeks have passed. … Seven weeks have passed …” since the initial charge, and Siskind delights in presenting virtually the same sentence each time. She charts the slow-motion fiasco that is Jared Kushner’s security clearance and financial disclosures. She dwells on the president’s habitual disdain for vital information, including daily intelligence reports and State Department briefings prior to conversations with foreign leaders – the sort of thing that might tell you if, say, the United States has a trade deficit or surplus with Canada. She highlights Trump’s efforts to claim credit for what he did not achieve (particularly job growth before he took office) and deflect responsibility for what he did, as when he blames the generals for the deadly Niger ambush in October. She registers the administration’s unending high-level vacancies, making clear how they often occur in departments and agencies for which Trump has little interest or excess suspicion. She scours news reports for every time White House aides seek to enlist law enforcement or intelligence agencies in the campaign to discredit Robert S. Mueller’s investigation, a probe that Trump, even in the final week on Siskind’s list, dismisses as an “artificial Democratic hit job.”

And, most of all, Siskind lists the endless ethical breaches and financial conflicts of interest that trail this White House, the family that dominates it, and the top aides and Cabinet members beholden to it. It’s one thing to know; it’s another to read about them over and over and over.

Siskind argues that her list reveals a concerted effort to destabilize the U.S. political system. “It turns out authoritarians do follow a fairly predictable game plan – even if new to us and our fragile democracy,” she writes in the introduction. Whether homegrown authoritarianism is possible is the subject of Sunstein’s volume, “Can It Happen Here?,” which, for some reason, Sunstein insists “is not a book about Donald Trump, not by any means,” even though it is. (He said the same about his 2017 book, “Impeachment: A Citizen’s Guide.” Go figure.)

Several of the contributors – mainly law professors, with some diplomats, economists and psychologists tossed in – agree that American politics is susceptible to creeping authoritarianism and provide the intellectual underpinning to Siskind’s minutiae. Duke University economist Timur Kuran considers two “intolerant communities” in American society, the “identitarians” and the “nativists,” that derive meaning and purpose from their respective grievances and thus empower demagogues who promise to free one side from the purported outrages of the other. Few contributors fear a sudden and outright descent into autocracy. “It is a death by a thousand cuts, rather than the clean slice of the coup maker,” University of Chicago law professors Tom Ginsburg and Aziz Huq write. “Because it can be masked with a veneer of legality, it can be cloaked with plausible deniability. It is always possible to justify each incremental step.” Which is why Siskind is recording every one.

I hope Siskind writes “The List, Vol. II,” and a third and fourth as well. I would read them all. There is strength in the immutability of the exercise, a counter to government by alternative facts. But I’m not sure that simply detailing Trump’s tumult and transgressions will necessarily help lead us back toward normality, not when chaos is less a hindrance to the Trump presidency than its fulfillment.

“Many people think that the sense of upheaval that Trump has created in American politics means that he cannot keep going this way for long, and that his presidency is about to crack apart at any moment,” Yale law professor Jack Balkin writes. “This is a mistake. Polarization and upheaval are good for him. Crisis is his brand.”