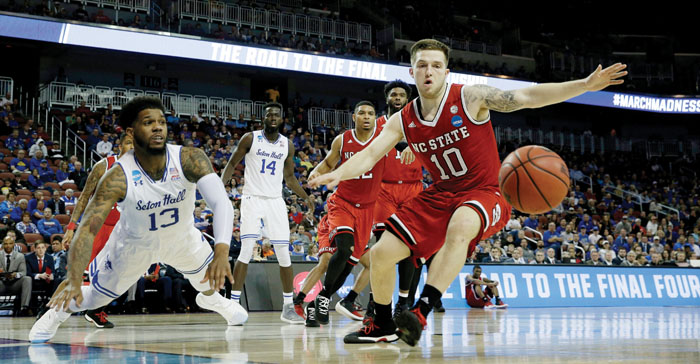 WICHITA, Kan. (AP) — Kevin Willard was watching TV on the eve of Seton Hall’s NCAA Tournament opener against North Carolina State when the self-described “Mr. Negativity” turned to his wife and asked what he would tell his core group of seniors if they lost.

Together they had resurrected a program fallen on hard times, yet success in March had been hard to achieve. Two straight years, the Pirates had been knocked out in the opening round.

“I said, ‘What am I going to say if they ask about their legacy?’” the Pirates coach recalled.

Well, he’ll have at least 48 hours to ponder the answer.

Myles Powell added 19 points and Angel Delgado scored 13 for the Pirates (22-11), who led the entire way a year after a late meltdown cost them an early exit against Arkansas.

“I always preach to these guys, no matter what in life, if you work hard you’ll be rewarded,” said Willard, whose team will play top-seeded Kansas on Saturday. “For them to get rewarded for all their hard work, that’s the biggest thing. That’s what I’m feeling right now.”

Allerik Freeman hit six 3-pointers and had 36 points to lead the No. 9 seed Wolfpack (21-12), who returned to the tournament under first-year coach Kevin Keatts for the first time in three years. Torin Dorn added 18 points and 12 rebounds, and Lennard Freeman contributed 13 points.

The only thing that slowed down the high-scoring, up-and-down matchup was the whistles. The teams combined for 53 fouls, resulting in 66 total free throws. Seton Hall had two players foul out — Delgado was one of them — and the Wolfpack had three players relegated to the bench.

Three other players finished the game with four fouls apiece.

“There were a lot of whistles,” Dorn said, “but coach always preaches you have to win all types of games. We just weren’t able to do that.”

The high-scoring tempo was set early on, when the Pirates scored on their first eight possessions and hardly missed a shot. If not for Freeman’s outside shooting, the bruising boys from the Big East might have put away their stunned ACC rivals before halftime.

The Wolfpack made a run of its own midway through the half, but was never able to gain the lead, and Seton Hall used another late charge to take a 51-41 lead into the locker room.

“When we would cut the lead down, they would do a great job of putting their heads down, getting to the free-throw line,” Freeman said. “Kind of stops the momentum a little bit.”

North Carolina State closed within 63-60 midway through the second half, as Freeman began to complement his 3-point shooting by slashing to the basket for easy layups. But he didn’t get a whole lot of help from a team that had relied on balanced scoring all season.

During one five-minute stretch, Freeman was the only one wearing red to score.

Carrington and Powell were just effective at the other end for Seton Hall. They combined to score 12 straight points for the Pirates, highlighted by a 10-2 run to seize control, and the starting guards showed plenty of poise when North Carolina State tried to make one last run.

“Our main focus was staying focused. I know that sounds funny,” Carrington said, “but the last two years we came here, the guys were kind of drained mentally. We couldn’t get over the hump. Guys came in real focused, real businesslike, and we’re not done yet.”

N.C. State hung tough thanks to Freeman, a transfer from Baylor, who went 6 of 8 from beyond the arc. But the rest of the Wolfpack were just 5 of 22 from 3-point range.

The Pirates advanced to play the Jayhawks, a 76-70 winner over Pennsylvania, in the second round on Saturday, while the Wolfpack resume Keatts’ building job as he looks toward Year 2.