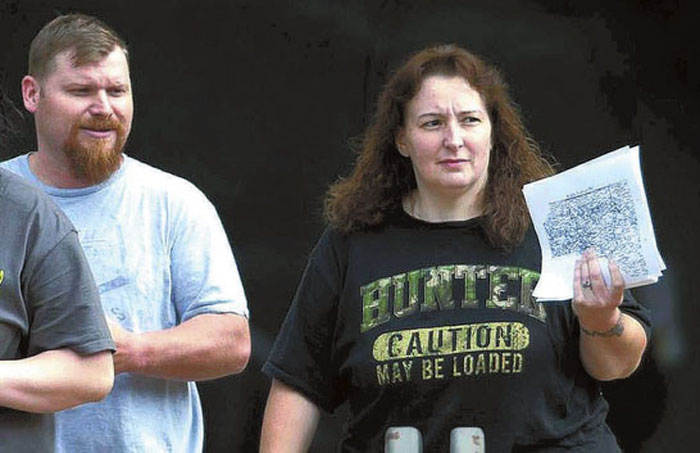 SALISBURY — Sandy Parsons, who nearly two years ago led Rowan County investigators to a shallow grave where the skeletal remains of his daughter were buried, asked for a court-appointed attorney during a brief first-appearance hearing Thursday.

Both are charged with first-degree murder as well as obstruction of justice, concealment of a death and child abuse with serious injury.

The pair are accused of killing their adopted daughter, Erica Lynn Parsons, who was reported missing by their biological son, Jamie Parsons, in July 2013. Sandy and Casey Parsons told authorities that they allowed Erica to live with her paternal grandmother, Irene Goodman, who they knew as Nan. Authorities said Goodman did not exist.

The girl’s biological grandmother, Cloie Goodman, died in 2005, much earlier than the 2011 time frame the Parsonses gave investigators.

Jamie Parsons would later testify in federal court that his parents abused Erica and encouraged him and his siblings to beat and mistreat her as well. A State Medical Examiner’s Office report confirmed that Erica had multiple broken bones and other injuries.

In 2016, Erica’s skeletal remains were found in a shallow grave in rural South Carolina.

Sandy Parsons’ hearing was just like his wife’s at less than three minutes. But it was long enough for him to cast a glance at Carolyn Parsons, Erica’s biological mother.

Carolyn Parsons said she did what she thought was best for Erica.

“To hear those charges and look them in the face and to know I trusted them to raise my child better than I thought I could, that hurts,” Carolyn Parsons said.

She said she’s known Sandy Parsons since he was a child, and he was her brother-in-law. She said she believed she was placing Erica in a stable home.

Carolyn Parsons said she’s grateful that Sandy Parsons finally spoke to law enforcement officers about Erica’s disappearance, but she said it doesn’t absolve him of the guilt he shares with Casey.

“He stood behind her and supported every lie that came out of her mouth,” Carolyn Parsons said.

She said she initially wanted them sentenced to death, but she thinks now that would be too easy. She said she wants them to live in prison knowing what they did for the rest of their lives.

Carolyn Parsons called her former brother-in-law and his wife monsters and said they are evil.

The Parsonses have both been held in federal prisons since their 2015 convictions on tax and wire fraud as well as identity theft and defrauding the government. They were found guilty of lying about and accepting adoption assistance payments for Erica even though she was not alive.