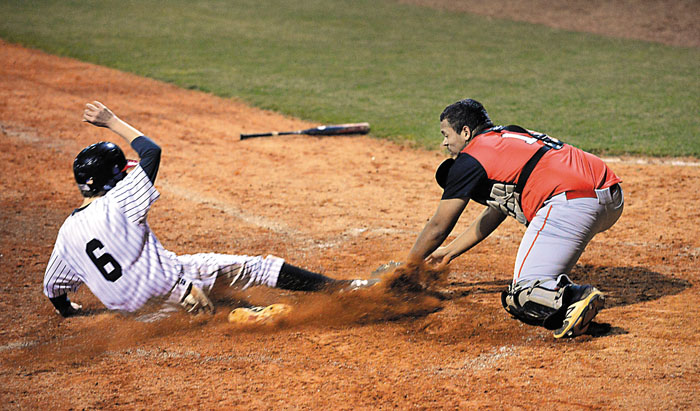 SALISBURY — Salisbury’s baseball team turned the ballpark on Lincolnton Road into Hitsville, U.S.A. Friday night — but that’s not even the good news.

While the Hornets knocked out 10 hits and sprayed line drives to all fields against visiting Central Davidson, it was winning pitcher Jack Fisher who earned headlines for throwing a five-inning no-hitter in an 11-1 triumph.

“To finally get out here and pitch this well is really great,” said Fisher, a senior southpaw who injured his left shoulder as a freshman, missed the 2016 season and was used sparingly last season. “I missed the game for two years and was just along for the ride last year. I only threw a few innings in relief.”

“When you attack the strike zone, good things are going to happen,” said third-year SHS coach Mike Herndon. “Especially if you attack it low. That’s what he did. When you attack low, you get a lot of ground balls and swings-and-misses.”

Fisher allowed only an unearned run in the top of the first inning, when Salisbury committed the first of its three errors. The Hornets sandwiched run-scoring doubles by Joe Steinman and Fisher around catcher Bo Rusher’s RBI-single to take a 3-1 lead against losing pitcher Reece Cope in the last of the first.

“I knew our bats were hot,” said Fisher. “I knew we’d get that run back and then get some more.”

They got five more in the bottom of the second to go up, 8-1. Rusher’s line-drive single to center plated freshman Vance Honeycutt and left the bases loaded for Chandler Lippard and his glow-in-the-dark bat. The senior first-baseman cleared them with a triple to left-center, tagging a 1-1 mistake pitch by Cope.

“Middle-in, waist-high,” Lippard said. “I did my job, but we all are right now. We’re hitting lights-out.”

Central coach Matt Parsons won’t argue with that. “Top to bottom, they do a great job making contact,” he said after the Spartans (5-2, 5-2) lost their second straight game. “They use the whole field and hit the gaps. It seemed like they hit everything hard.”

“He still has good stuff,” the coach said. “But his mechanics were a little off. I told him he’ll have more opportunities and that tonight does not define him as a pitcher.”

No, but it defined Fisher — who threw 53 pitches, each with guile and purpose. Pitch-by-pitch, he won the respect of Central’s hitters, his coaches and teammates and the festive crowd that witnessed his gem.

“Jack has improved so much since last year,” said Rusher, the Hornets’ sturdy backstop. “He’s battled through the injury and gone above and beyond. He’s a top-notch pitcher in this county right now — and he’s a lefty. That’s even better. That’s what you want.”

“Hey, every time we play, we’re playing to win,” he said. “That’s the attitude we’re bringing this year. We can’t be intimidated by who’s who or whatever. We feel like we belong on the field against good teams. It wasn’t always like that around here, but our guys have bought in.”

The Hornets have bought their tickets and now they’re taking the ride.

NOTES: Salisbury’s team batting average jumped to .429 through eight games. Lippard went 1-for-3 and saw his average drop to .769 (20-for-26). He leads the team with 20 RBIs. … Designated hitter Blake Clark celebrated his 17th birthday with a two-run single that closed the scoring in the fourth inning. … The Hornets visit Central Davidson at 7 p.m. Monday.