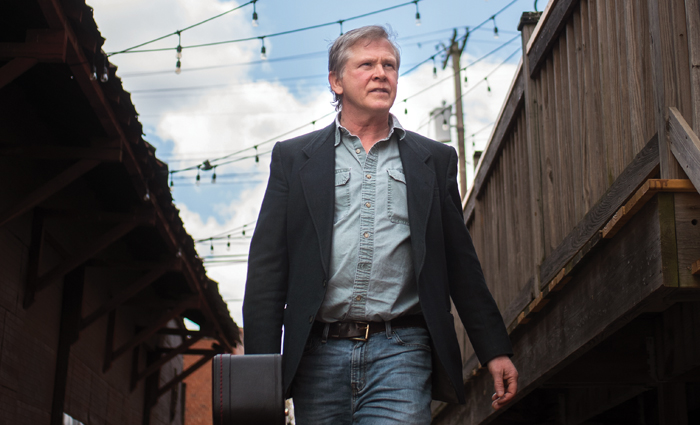 Jim Sharkey has made a successful career out of his passion for music, playing in clubs, breweries and other venues in the Carolinas and Virginia. Rebecca Benson/Salisbury Post

He’s definitely Irish, though he was born in the United States. You could call his music Celtic or Irish folk with equal doses of Americana. At his shows, beyond some of his own songs, Sharkey will mix in the likes of Bob Dylan, Gordon Lightfoot and John Denver.

But let’s call Sharkey Irish and leave it at that, since we’re heading into St. Patrick’s Day. So how does an Irish singer-songwriter end up in Salisbury?

Almost two years ago, Sharkey and his wife moved here from Roanoke, Virginia, because Marie, a physician, was taking a new job at the Hefner VA Medical Center.

“In the end, this is probably a really good spot to be,” Sharkey says.

From his Salisbury home and serving as his own manager, Sharkey books himself at venues mostly in Virginia, North Carolina, South Carolina and the Washington, D.C., area. The places could be breweries, clubs, restaurants, folk music gatherings, weddings, private parties, retirement homes and the like.

Given his background, he regularly plays at Irish pubs or restaurants such as The Workman’s Friend in Charlotte and the South Carolina venues of O’Hara’s in Lexington and McGee’s in Anderson.

Sharkey, 56, occasionally is asked to sing on radio and television shows, and he has recorded two CDs. This weekend — at 10:40 p.m. Friday and 8:40 p.m. Saturday — his music will be featured on the “Roots Down” show of WVTF public radio in Roanoke, Virginia.

It wasn’t until 2014 that Sharkey dived into music full time. He was attending a concert in Ireland when he made the decision. He thought the risks were minimal. Jim and Marie’s two daughters were grown and living in Maine. Marie was established in her work.

“It is something I always wanted to do,” Sharkey says.

Sharkey has a bachelor’s degree in film and video production, a field in which he worked for many years, and he also has a master’s degree in education.

Back in Roanoke, when he decided to go full in on his music career, Sharkey had been in the highly stressful job of teaching autistic children.

That’s not to say making his way in music has been easy.

“It’s hard work,” Sharkey says, describing it as a matter of pushing doors open a little bit wider with each performance. Things progress “in small, small steps,” he adds.

Sharkey has never been part of a band, and he recognizes the advantages in that when it comes to practicing and booking shows. There are no arguments.

“I can tell myself off,” Sharkey says.

Sharkey’s not-so-traditional path toward becoming this Irish singer-songwriter started when his parents immigrated to the States in the 1950s. His father was in the steel-erecting business, involved in building highway infrastructure such as bridges and overpasses.

Sharkey was born in Hartford, Connecticutt, in 1961. A brother also was born in the U.S. before the family moved back to Ireland when Jim was 6. So he spent most of his youth growing up on a family farm in the town of Ballaghadereen, part of County Roscommon.

Interestingly, the music that had a strong early influence on him took a similar route from the United States back to Ireland. The Clancy Brothers, a Celtic quartet in Ireland, came to the United States in the 1960s to become actors, but they fell into the music scene in New York’s Greenwich Village and became popular.

They revived a lot of Irish folk songs and played with Dylan. They eventually returned to Ireland and were part of a late 1960s revival of Irish music by bands of younger musicians, who brought the traditional Celtic music a step forward.

In his youth, Sharkey says, this contemporary Irish folk, standard rock and country music were popular in Ireland. He had few lessons and mostly taught himself to play guitar when he was a late teen.

Sharkey dropped out of school as a 15-year-old to become an apprentice plasterer. But in a few years, the economy in Ireland tanked, along with the construction job. Sharkey was out of work and listening to an American-born friend who was enlisting with the U.S. Navy in London.

He served five years in the Navy, mostly as a photographer on the USS Dixon, which was based in San Diego. For Sharkey, who was used to the frequent rains and ever-changing weather in Ireland, the monotonous warmth and sunshine in San Diego actually was hard to get used to at first.

The Navy stint helped pay for Sharkey’s college education. Through the years, he has lived in California, North Carolina, Maine and Virginia.

Sharkey plays guitar, harmonica and on rarer occasions a bodhran, an Irish drum. With his songwriting, he says he can hone in on what a song is about the more he works with it.

“I try and write stuff that’s fairly contemporary,” he says.

When Sharkey does record — his CDs are titled “Misty Morning Rain” and “Sweet Anne’s Road” — he relies on Windfall Studios in Floyd, Virginia.

Sharkey travels back to Ireland at least once a year to visit his sister and mother, who still lives in County Ronscommon. His brother lives in Pennsylvania.

As annoying as it must be, Sharkey tolerates the media who often seek him out around St. Patrick’s Day when they are looking for some kind of Irish connection.

“Any attention is welcome,” he says.

It’s funny, Sharkey says, but St. Patrick’s Day in Ireland was a much quieter holiday before Americans changed it. “It was more like a Sunday, like a holy day,” he says.

Now, even his Irish hometown has a St. Patrick’s Day parade.

Again, it’s that United States back-to-Ireland thing that Sharkey has witnessed many times.

Saturday, on St. Patrick’s Day, Sharkey will be playing in Floyd at Bella La Vita Inn. This appearance follows stops Thursday night at Jekyll & Hyde in Matthews and a retirement community Friday afternoon in Winston-Salem and a private party tonight in Hillsdale, Va.

Around here, Sharkey is booked to appear at Morgan Ridge Railwalk Brewery and Eatery on April 12. You can hear and read more about Sharkey at www.jimsharkeymusic.com.