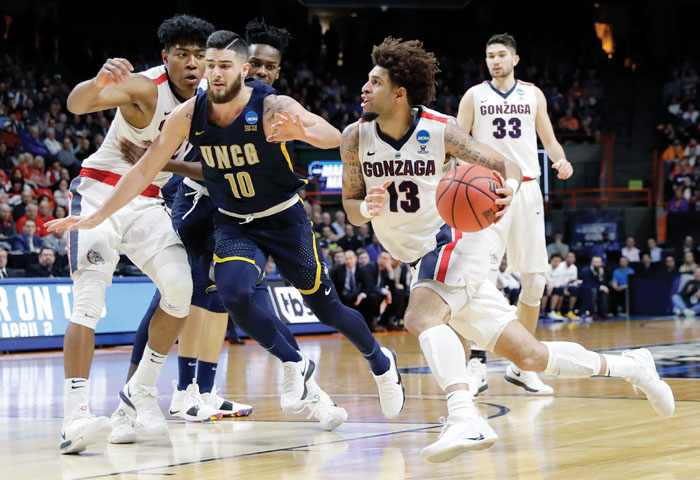 This year, the redshirt freshman will be part of the highlight reel.

The shooting guard from Chicago hit the go-ahead 3-pointer with 20.8 seconds left Thursday to help the fourth-seeded Bulldogs escape a major scare in the West Region with a 68-64 victory over UNC Greensboro.

Last season’s national runners-up trailed 64-62 with 1:48 left after squandering a 12-point lead they took early in the second half.

Josh Perkins tied the game at 64 with a long jumper, and after Greensboro’s Francis Alonso forced up a miss, Gonzaga got the rebound and worked the ball to Norvell, who spotted up from the right elbow and made the 3 for the lead.

As a highly touted recruit, Norvell chose Gonzaga (31-4) over Florida State and Georgetown, to name a few, but he hurt his knee leading up to last season. A long recovery, plus the fact that the Zags had a stockpile of talent at the guard position, turned Norvell into a bystander last year while the Bulldogs were making the program’s first run to the Final Four.

He’s been front and center 2017-18, starting most of the season and averaging 12 points a game. And even though he was 2 for 11 before his game-winner, he had the confidence to keep shooting.

After Norvell’s go-ahead hoop, Alonso got called for an offensive foul, but on the ensuing possession, Gonzaga’s Rui Hachimura missed a pair of free throws. Marvin Smith had a chance to tie it, and his 3-point attempt looked spot on, but it bounded in and out. Norvell made one more free throw to ice the game and finish with 15 points.

“You think about the what-ifs,” said Spartans coach Wes Miller, who helped UNCG make the tournament for the first time since 2001. “I could’ve made some better play calls.”

The game became a matchup of wits down the stretch, and Gonzaga had most of Greensboro’s plays scouted. It forced Miller to switch things up, which contributed to a series of empty possessions: Alonso’s force, his offensive foul and a missed connection on an alley-oop try between Troy Demetrius and Smith after the Spartans had taken their 64-62 lead.

“I don’t think any of our calls were bad calls, but you think ‘what if,’” Miller said. “I think that’s what you do in this situation as a player and coach.”

Gonzaga, in its 20th straight NCAA tournament, won its first game of March Madness for the 10th straight year, though that’s not the mission anymore for the Zags. They came into the tournament playing well enough to make another run at the Final Four.

They ran into a grinder of a defensive opponent in the 13th-seeded Spartans (27-8), the Southern Conference champs who held Gonzaga to 37 percent shooting in the first half, but couldn’t make many shots of their own: they went 0 for 13 from 3 over the first 20 minutes.

Things opened up in the second, and behind Alonso and Demetrius (16 points each), UNCG chipped away, finally taking the lead on Jordy Kuiper’s tip-in at the 1:48 mark.

But Gonzaga finished with the game’s final six points — and a new name on its ever-growing list of playmakers.

INSIDE FORCE: Gonzaga built its 12-point lead in large thanks to Johnathan Williams, who led the Zags with 19 points and 13 rebounds. He had a hand in every basket over the first four minutes of the second half, while the Zags were building a 42-30 advantage.

LOCKDOWN D: James Dickey finished with 10 points and 11 rebounds for the Spartans, and his long arms and out-of-the-building hops kept Gonzaga in check through much of the game. UNCG won the rebounding contest 41-37.

NEXT UP: Gonzaga: Saturday against the winner of Ohio State-South Dakota State.