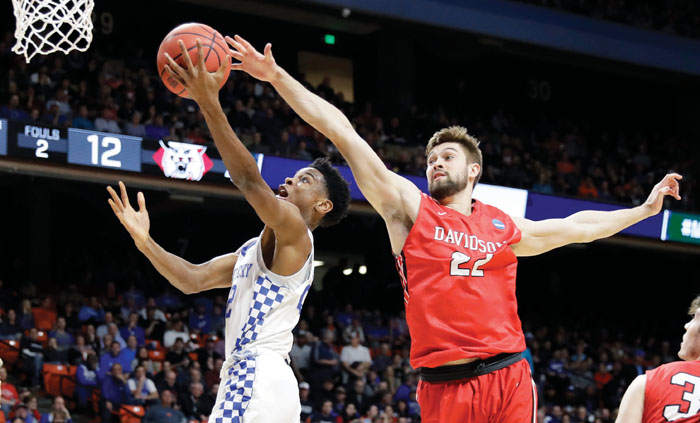 BOISE, Idaho (AP) — Kentucky topped Davidson 78-73 in the NCAA tournament Thursday despite failing to make a single 3-pointer, snapping a nation-best streak of 1,047 games with a 3 that began in 1988.

The fifth-seeded Wildcats went 0 for 6 from behind the line and didn’t even try one over the final 8:46.

The last time Kentucky didn’t make a 3-pointer was at the Great Alaska Shootout against Seton Hall on Nov. 26, 1988 — when Eddie Sutton was coaching, LeRon Ellis was the team’s leading scorer and the 3-point arc was only in its third year in the college game.

Knox finished 8 for 16 from the floor, including a pair of baseline jumpers from the 15-to-17-foot range that helped Kentucky pull away. He went 9 for 11 from the free-throw line, but also 0 for 3 from 3-point range.

Wenyen Gabriel, Hamidou Diallo and Quade Green all missed one 3-pointer apiece for Kentucky, which has won despite struggling from long range all season.

The Wildcats ranked 344th out of 351 Division I teams in 3-pointers made this season. Only 26 percent of their attempts have been from 3, and it wasn’t hard to see the streak ending.

They were 0 for 13 against Missouri earlier this season before making one with 2:51 left to keep the streak alive on Feb. 3. They went 1 for 11 in an earlier game against South Carolina.

Davidson made 11 3-pointers, led by six from Jon Axel Gudmundsson, who finished with 21 points.