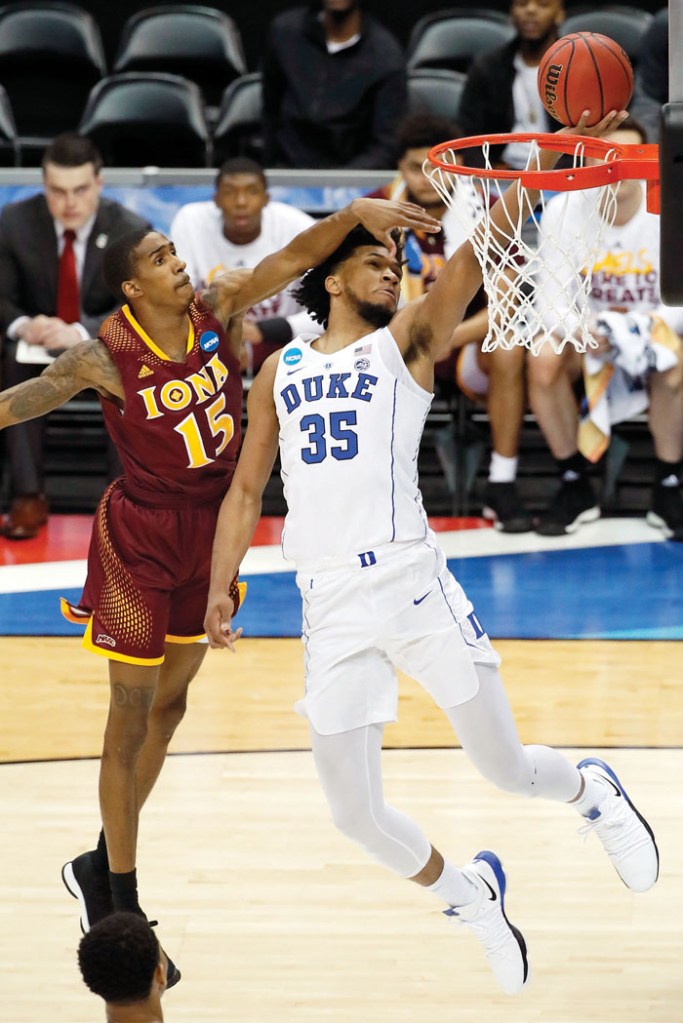 PITTSBURGH (AP) — Mike Krzyzewski keeps wringing his hands about his team’s youth. And then Duke and its roster of NBA-bound freshmen get on the floor against a more experienced opponent and the Hall of Fame coach’s fears largely vanish.

The Atlantic Coast Conference Player of the Year did whatever he wanted against game but overmatched Iona, pouring in 22 points to go with seven rebounds in his NCAA Tournament debut as the Blue Devils pulled away for an 89-67 victory on Thursday. The 6-foot-11 freshman forward made 10 of 14 shots in 32 minutes — even making his lone 3-point attempt — as Duke rolled into a second-round Midwest Region matchup with seven-seeded Rhode Island on Saturday. The Rams held off Oklahoma in overtime in the opening game of the tournament.

“I woke up and felt a little anxious,” Bagley said. “I was just anxious to play. When the first game came on, I was watching it a little bit until we left the hotel. From there it was time to lock in.”

After some early issues with the Gaels, that wasn’t a problem.

Duke allowed seasoned if undersized Iona (20-14) to hang around for most of the first half then tweaked its zone defense enough to disrupt the Metro Atlantic Athletic Conference tournament champions . Bagley and some solid shooting and unselfish play by the Blue Devil backcourt trio of Grayson Allen, Trevon Duval and Gary Trent took care of the rest.

Allen and his two freshmen teammates combined for 51 points and 18 assist of Duke’s 24 assists. Each of them made four 3-pointers, and when the Gaels came out to challenge, Bagley and Wendell Carter Jr. had plenty of room to go to work inside. The Blue Devils outrebounded Iona 39-29 and outscored the Gaels in the paint 46-30.

Roland Griffin led the Gaels with 21 points off the bench. TK Edogi chipped in 11 points and nine rebounds and Zach Lewis and Schadrac Casimir had 10 points each, but Iona simply couldn’t keep up while falling to 1-13 all-time in the NCAAs.

“We knew they had two bigs that was top in the country, and we tried to get them to shoot, try and beat us that way, try to let them shoot the ball all night,” Iona guard Rickey McGill said. “Obviously, they was having a hot night, and it just didn’t go our way.”

Iona head coach Tim Cluess acknowledged before the game his team, making its third straight NCAA appearance and fifth in the last seven seasons, would have an edge in experience. At the end, however, Cluess allowed “talent is talent.”

And the gap between Duke and the Gaels came into full focus about midway through the first half.

Iona welcomed the chance to run with the Blue Devils. They did. For a while, anyway.

A jumper by Griffin pulled Iona within 26-23 about 9 minutes into the game as the two teams played at a breakneck pace. The Blue Devils upped the intensity a bit defensively and when Allen hit a 3-pointer at the halftime buzzer, Duke led 53-39. A 19-7 burst to start the second half boosted the Blue Devils’ edge to 26 points and any concerns that Duke would falter as a No. 2 seed for the second time in six years vanished.

Krzyzewski won’t have to look far for a scouting report on the Rams, coached by Danny Hurley, the younger brother of former Duke star and current Arizona State head coach Bobby Hurley. Krzyzewski and the Hurley family have been tight for years and Krzyzewski is well aware of what awaits the Blue Devils on Saturday: solid guard play and a team that won’t beat itself.

“Danny’s team — yeah, he’s built a — he hasn’t built a team, he’s built a program there,” Krzyzewski said. “You know, that’s the difference. That’s what you want to do is build a program that develops teams year after year, and he’s done that at Rhode Island.”

Iona: The Gaels lose Edogi, Lewis and Deyshonee Much to graduation but should one again be right in the mix in the MAAC next season, as they have so regularly during Cluess’ highly successful tenure.

Duke: The Blue Devils got it together late in the season thanks in large part to their defense. It didn’t exactly look that way at times against the Gaels, who shot 53 percent in the first half.

Duke: Has never lost to Rhode Island in four meetings, including a 75-65 victory in the Hall of Fame Tip-Off tournament in Nov. 20, 2016.