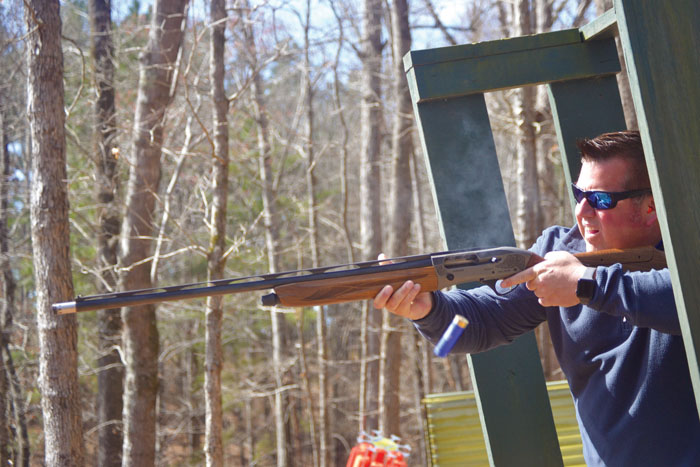 NORWOOD — Neither Redcoats were invading Colson’s Mill nor the South rising again despite a barrage of gunfire just outside the town limits of Norwood last Friday.

But the patter erupting from The Fork Farm was anything but nefarious. In fact, the thunderous chorus of blasts along with intermittent shouts of “pull!” was for a good cause — land conservation.

“We’re actually putting land back in the public’s hands,” said Travis Morehead, executive director of the LandTrust of North Carolina.

LandTrust held its second annual Conservation Classic Sporting Clays Tournament at The Fork Farm. It’s one of two of the group’s major fundraisers. The nonprofit conservation advocacy organization grossed about $15,000 from the tournament, with proceeds benefiting the agency’s service of 10 counties in central North Carolina.

“We’re excited about doing it here and reaching out to the sportsman demographic,” Morehead said.

Historically, sportsmen have played a significant role in natural resource conservation. Hunters and anglers were among the first to crusade for wildlife protection. Many remain active leaders in today’s conservation efforts.

Nearly 100 shooters participated in the four-man teams. Competitors rotated among 21 stations where each team shot a total of 50 birds, or sporting clays.

Connected by a wooded trail, competitors hiked to the stations toting either a 12-gauge or 20-gauge shotgun. At each station, shooters took turns at trap shooting.

“It’s like golf but with guns,” said Josh Blayton, manager of The Fork Farm.

“That and plenty of practice … and a lot of shooting,” said competitor Jeff Jordan of Jordan Lumber.

Shooters must lead the moving targets in different directions. Sometimes there’s only one, other times there are two clay pigeons flying in opposite directions.

A record is kept of each shooter’s hits and misses at each station. Those with the most hits or fewest misses overall are declared the winners.

But the real winner is LandTrust as the group uses the proceeds to buy more land for conservation.

LandTrust has acquired 26,000 acres over 22 years, all earmarked for conservation. In Stanly County, 2,107 acres has been conserved.

“This is a once-in-a-lifetime chance. You don’t get more land,” Morehead told the shooters.

LandTrust is working to purchase 4,700 acres and 76 miles of shoreline owned by the Aluminum Company of America (Alcoa). Plans call for LandTrust to use $1.2 million from a Clean Water Management Trust Fund toward the purchase.

With the grant, LandTrust plans to secure 2,310 acres along the Yadkin River and High Rock Lake while its partner, the N.C. Wildlife Commission, aims to acquire the remaining 2,400 acres on the eastern shore of Tuckertown Reservoir.

Last May, LandTrust bought two properties for conservation, including 45 acres of Buzzard Mountain in Montgomery County. The property sits prominently along N.C. 24-27 and is part of the view shed when driving into Montgomery from Stanly County crossing Swift Island Bridge.

This southern end of the Uwharrie Trail could eventually become an extension of the trail while providing more recreational amenities.

LandTrust also purchased a 20-acre site in Montgomery on the Uwharrie River and adjoining 1,288 acres already owned by the nonprofit group, better known as the Low Water Bridge Preserve.

Afterward, Jim Cogdell, owner of The Fork Farm and Stables and a member of the N.C. Wildlife Resources Commission, spoke to participants and pledged $2,500 to LandTrust.