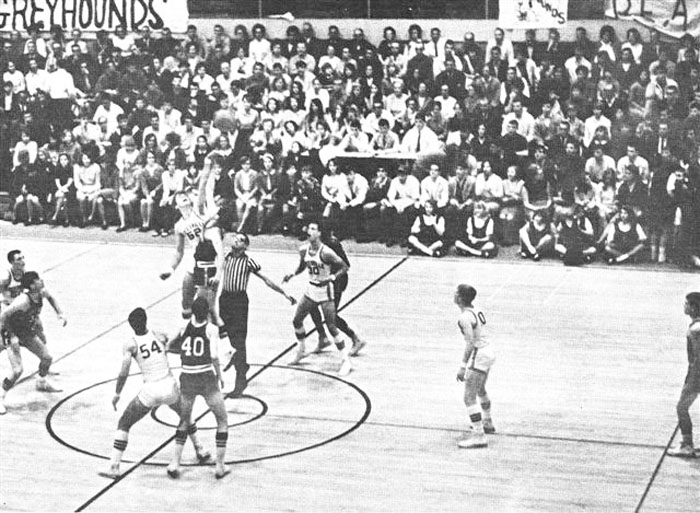 SUBMITTED PHOTO Tip-off of the 1967 Piedmont championship game between Statesville (in white) and Kannapolis A.L. Brown. Eddie Gamble and Dan Dayvault are jumping center. The scene was similar the next year, when Brown hosted Kings Mountain for the title.

KANNAPOLIS — Since the late 1970s, Kannapolis has been a football town.

From the mid-1940s to the early 1960s it was mostly a baseball town, always a threat to win the American Legion state championship.

There also was a time when A.L.Brown basketball became the magnet for the town’s sports fascination, with players such as Dandy Dan Dayvault and Vernon Long. That was the late 1960s, the era of Vietnam, integration and flower children, when the Wonders turned Kannapolis into a hoops-mad community.

Fifty years ago, March 14, 1968,  the Wonders played in W.J. Bullock Gymnasium in the greatest basketball game in Kannapolis history. In 1976, during the bicentennial, that game was voted  Kannapolis’ “game of the century” by a local panel of experts. It’s true, the Wonders played in the 1983 3A state championship game when current coach Shelwyn Klutz was on the roster, but that game was a loss (to Graham) and it was played in Greensboro, so the 1968 game still has to rank No. 1.

The magnitude of a special game, its place in history, is measured by the stature of the opponent. In other words, whom did you beat?

In Salisbury, that game of games is still Boyden’s 1971 clash in the Western North Carolina Activities Association (WNCHSAA) title game with David Thompson’s Crest Chargers at Catawba College. Winning against Thompson made it a game for the ages. It’s remembered. Coach Bob Pharr, architect of the 1-3-1 zone that stymied Thompson, is remembered as an all-time great coach. The late Kenny Holt, the forward who outplayed Thompson on that night of nights, is remembered as an all-time great player.

In Kannapolis, the game of games came three years earlier. The worthy opponent, Kings Mountain, rolled in from the foothills with four all-conference players and a pair of prep All-Americans, one who made the pros. Kings Mountain had been crushing people and was undefeated. If you asked a sports fan in their 60s in Kings Mountain today, they’d tell you that’s still the best team that town has ever had.

But Kings Mountain lost to the Wonders. As far as I know, Long is the only one of those Wonders who experienced sustained success in college ball, and that was at a small school — Lenoir-Rhyne.  But for one night, the one that mattered, coach Earl Lentz’s Wonders were the better team. That home crowd, 3,500 strong, every inch of seating filled on the lower level as well as in the balcony, with people crammed thickly against the walls, had to help.

Dayvault, a sophomore, debuted with a team-high 15 points, the first 15 of a legendary 1,000-point career. Dayvault had mastered the Jerry West jump shot, perfectly released at the height of his leap after suddenly springing skyward. Dayvault was a deadly shooter and the ultimate competitor and big-game player.

Even bigger than Davvault’s debut, Long, another sophomore, integrated A.L. Brown’s basketball program on that forgotten night against West Rowan. He came off the bench. He scored six points.

Those were “freedom of choice” years in the education system.  Long opted to come to A.L. Brown from George Washington Carver High, Kannapolis’ school for African-American students.  The Carver Blue Eagles thrived just a few blocks away from A.L. Brown, turning out splendid athletes and bright scholars, but in December 1965, in a segregated southern mill town, the two schools stood worlds apart.

There are zero black players in A.L. Brown’s 1965 football team photo, but there are several in the 1966 photo. So Long probably can be credited not only with integrating A.L. Brown basketball, but A.L. Brown athletics.

As a sophomore in a tough league, Long averaged just 3.4 points per game. Acceptance from white fans probably didn’t come quickly. His mistakes, his shot selection probably were scrutinized and magnified.

A.L.Brown turned things around in a huge way the next season under Lentz, an A.L. Brown graduate who had been a baseball star at Catawba College. The 1966-67 Wonders weren’t as good as Albemarle or Statesville in the SPC during regular season, but they got hot at the right time and made a stirring run to the WNCHSAA championship. The starters were juniors Dayvault, Long and Ken Sharpe and seniors Reggie Smith and Steve Lambert. It was a cerebral, sharp-shooting team, and they beat Rutherfordton-Spindale, 70-61, at Lenoir-Rhyne College for the title. Dayvault, who averaged 17.6 points, got 20 in the championship game.

Long liked to shoot, but he was employed mostly in a playmaking role. He scored 5.8 points per game.

G.W. Carver’s final graduation class received diplomas in the spring of 1967, meaning that for the 1967-68 basketball season, many former Blue Eagles had become Wonders.

Foremost among those new Wonders were Larry Johnson and James Lipscomb. They gave A.L. Brown  imposing frontcourt athletes who brought an awesome size/speed combination to the gym. Dayvault no longer had to jump center,no longer had to be the leading rebounder, because Johnson and Lipscomb were soaring. They were going to get double-digit boards every game.

Johnson and Lipscomb arrived to join Dayvault, Long and Sharpe at just the right time. Always a bear, the SPC had suddenly gotten even fiercer with the addition of  Lexington and Salisbury’s Boyden High. Lexington and Salisbury had been longtime members of the NCHSAA, but it didn’t make sense to drive to Greensboro or Winston-Salem for league games when natural rivals in the WNCHSAA, schools of similar size, were all around them. So the seven-team SPC became the nine-team SPC. It may have been the best middle-sized league there’s ever been — A.L. Brown, Albemarle, Statesville, Lexington, Boyden, Concord, South Rowan, Thomasville and Asheboro. There were few nights off, even for a team as good as the 1967-68 Wonders.

Late that season, Albemarle coach Ken Frazier called the Wonders the best high school team he’d ever seen. They had good size, efficient scorers and exceptional athletes at all five positions, plus some depth — but they still lost two league games.

Long and Dayvault combined for 35 points, but the Wonders lost to Albemarle in the third game of the season. They won their next 11 before being stunned by bitter rival Concord, 67-46. The Spiders held Dayvault to a season-low seven points.

Long scored 20 as the Wonders blew out Concord a week later in a revenge game. SPC regular-season champs at 14-2 (one game better than Albemarle), the Wonders headed to the SPC tournament.

A.L. Brown was nearly knocked off by eighth-seeded Thomasville in the first round, but Dayvault sparked an amazing comeback.

The results of a  zany first round eliminated the most troublesome competition. No. 7 Boyden stunned No. 2 Albemarle, while No.6 South Rowan ousted No. 3 Statesville. No. 4 Lexington sent No. 5 Concord home.

Long and Johnson combined for 41 points in A.L. Brown’s semifinal win against Lexington. South Rowan, energized late in the season by the promotion from the jayvees of sophomore Jay Bradshaw, won the other semifinal.

The Wonders had beaten South by 50, 85-35, during the regular season, but the tournament final was scrappier. The Wonders prevailed, 71-60.

West Rowan had enjoyed a banner season and owned a 17-game winning streak, but Bradshaw scored 18 points and  Jerry Franks had 17 as South Rowan blasted the Falcons, 67-44, proving just how good the SPC was.  A.L. Brown cruised by 22 points over Central Davidson.

Those scores set up a fourth meeting between South and A.L.Brown for the Piedmont championship. A.L. Brown shot 50 percent, put all five starters in double figures and romped, 69-49.

Meanwhile in the western half of the 39-team, four-conference WNCHSAA, Kings Mountain had dismantled Rutherfordton-Spindale, Lincolnton and Crest to win the Southwestern Conference tournament. After Kings Mountain brushed aside Northwestern Conference champion Hickory, it was on a collision course with the Wonders for the WNCHSAA title. The Mountaineers were 25-0. The Wonders, who had won eight straight since the loss to Concord, were 21-2.

Scouting was more of an inexact science then. What the Wonders knew about Kings Mountain was mostly from word of mouth, not film. The Wonders also were likely a mystery to Kings Mountain. Certainly the Mountaineers knew Dayvault could shoot, but from how far out, that had to be a surprise. Nobody shot like that.

The star for Kings Mountain, coached by future Belmont Abbey and Davidson coach Bobby Hussey, was 6-foot-5 George Adams. Adams would do great things at Gardner-Webb  and would play three seasons in the ABA. How good was he? Gardner-Webb began its sports hall of fame by inducting Adams.

Adams was far from the only problem presented by Kings Mountain. Otis Cole was young in 1968, but he would become a prep All-American. He would go on to Florida State and competed against UNC and UCLA in the 1972 Final Four. Then there was Ken Mitchem, the  muscular forward who had integrated Kings Mountain basketball in 1965-66. A junior in 1968, he’d started every game for three years and would play college ball at Pan American. Fourth option Steve Spencer was all-conference.

The Wonders were underdogs for the first time that season, but they handled the role well.

Dayvault shot 12-for-18 from the field. It’s possible that all 12 of his field goals would’ve been 3-pointers in today’s game. He scored 25 and pulled down 11 rebounds.

It was 44-all after three quarters, the crowd roaring on every bucket, every turnover, every call. Gardner-Webb star Artis Gilmore, his impressive Afro making a 7-foot-2 guy look 7-7, towered above the crowd, cheering for his buddy Adams.

Thomas Miller, a reserve, scored the biggest bucket of his life for the Wonders to cut the deficit to three points. When Lipscomb made two free throws with 4:48 left, the Wonders were down, 52-51.

When Adams scored with 2:30 left, he was headed for 30 points and Kings Mountain led, 56-53. That’s when Dayvault drilled another long one. After Long stole the ball, he found Dayvault. and another shot swished from deep. The Wonders were up, 57-56, with 1:51 on the clock.

Johnson’s defensive board and two clutch free throws made it 59-56. Adams made two free throws six seconds later, and the Wonders led, 59-58.

The Wonders were in their delay game for the final 30 seconds, with the Mountaineers frantically chasing. Kings Mountain fouled Sharpe, who had been quiet. He stepped to the line and made two for a three-point lead.

After Kings Mountain missed, it was Long who marched confidently to the foul line and calmly made two to ice the 63-58 victory that brought madness to the Wonders’ gym.

The entire team was hoisted on the shoulders of delirious fans. Fifty years have passed, but that’s still the largest crowd to see a game in that gym. And probably the happiest.

Dayvault, who chose college football over basketball,  played quarterback at Chowan and Memphis State. He was 64 when he died in 2014.  Coach Lentz died at 80 in 2015. Both are enshrined in the Cabarrus Sports Hall of Fame.

Long, who averaged 15.6 points as a senior, went on to have an exceptional career at Lenoir-Rhyne, scoring more than 1,200 points for the Bears while playing for three different head coaches.

He was a pioneer at L-R as well. When he headed to Hickory in the fall of 1968, he was integrating another basketball program.

Emotional season for Mulkey, Baylor heading back to women’s…