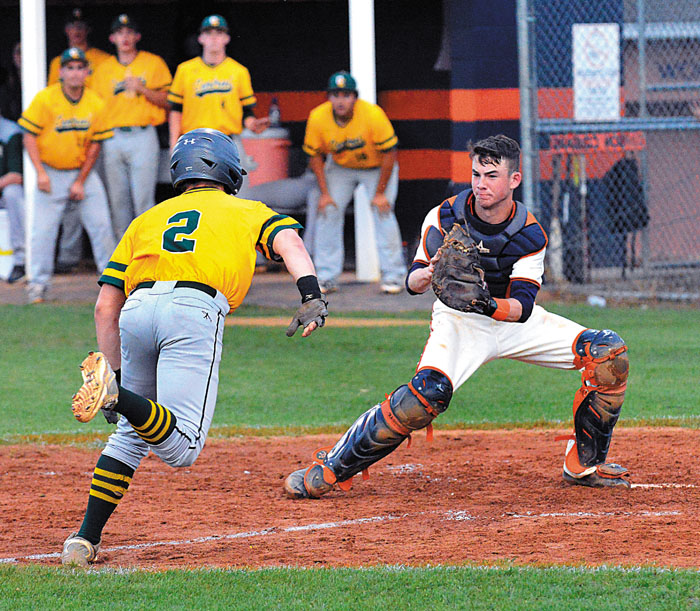 CHINA GROVE — Carson’s baseball team must be working on its corporate image.

Whether they’re collecting shutouts or piecing together timely hits, the Cougars are finding ways to prevail. They used a businesslike approach Thursday night to beat visiting Northwest Cabarrus, 9-6, for their third consecutive non-conference victory.

“We’re just doing what we’ve got to do,” center fielder Brycen Holshouser said. “It’s all about trusting yourself and getting comfortable out there.”

Carson (4-3) looked the part after rallying from a three-run deficit in the first inning. Holshouser went 2-for-4, scored twice and stole a base to ignite a second-inning rally. Freshman teammate C.P. Pyle delivered a two-out, two-run single that tied the score in the last of the first. And while starting pitcher Sollie Holshouser only completed three innings, he retired seven of the last eight batters he faced — giving the Cougars just enough juice to overcome Northwest’s 10-hit attack.

“Well, we hit the ball but we didn’t do a very good job on the defensive end,” losing coach Joe Hubbard said after Northwest (3-4) committed six errors and yielded six unearned runs. “That told the story. Our defense was a big letdown.”

The Trojans hit five doubles, including Blake Sinclair’s lost-in-the-sun two-bagger that opened the game. Four batters and a base-on-balls later, Devin Faggart ripped a two-out, two-run single on a 3-0 pitch.

“Devin Faggart is a great hitter,” said Carson coach Chris Cauble. “We got a little too much of the plate on that pitch. Good hitters make you pay.”

“He threw it well and filled up the zone,” said Alewine. “That’s just how baseball is. Hits are going to happen. On that 3-0 pitch, it was second nature. He threw it the way he practices. You play by the circumstance.”

Northwest went up 3-0 when Davis Kirk slashed a hit-and-run double to deep center. Carson returned fire with three runs in the last of the first against previously unbeaten right-hander Jack Robinson. Two errors, a walk and Pyle’s clutch base tied the score.

“He had two strikes on him and there were two outs,” said Cauble. “That was a clutch hit by a young freshman who I believe is going to be a great player.”

Carson used three Trojan errors to score three times in the last of the second. It was still 6-3 in the top of the fifth when winning pitcher Logan Rogers issued a leadoff walk to Northwest’s Sam Walker, then promptly picked the runner off.

“I wasn’t happy with the way he got on,” said Rogers, a left-handed sophomore. “And I was already planning on throwing one over there, but he just made a bad decision. He didn’t read it right.”

“I had to clear my mind,” he said, “and make a pitch that got my team back in the dugout.”

Carson secured the win and took a 9-4 lead in the bottom of the sixth. Clayton Gilmore’s leadoff hustle-double to left, Owen White’s sacrifice fly and Maddux Holshouser’s two-out, RBI-single keyed the rally. Faggart’s two-run double with two away in the seventh inning closed the scoring before Devin Gay — the fourth Carson pitcher — fanned Kirk on an 0-2 curve to end the game.

“When you make seven errors and give a team 28 outs instead of 21, it’s hard to win,” Hubbard said following the Trojans’ third straight loss. “You can’t give good teams extra outs and expect it to be close.”

The Cougars had seven hits and are trying to move the needle on the .183 team batting average it brought into the game.

“It’s more the mental part of it at the plate,” Cauble said. “We’ve been hitting a ton in practice. We’ve got to be able to muster more runs in game situations.”