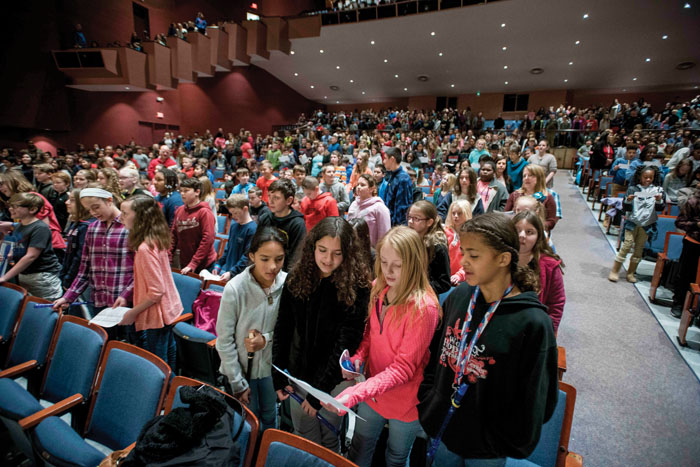 SALISBURY — Keppel Auditorium was quiet until the silence was broken by a swell of strings. Next were soft woodwinds and the rumble of percussion.

Wesley Schulz, associate conductor of the North Carolina Symphony, looked out at the mass of fifth-graders and asked them to listen closely — to feel the “color” of the music.

For close to 50 years, Rowan County fifth-graders have made a trip to Catawba College and fallen in love with music. They did so again Wednesday.

“We have a long history of performing in Salisbury,” said Sarah Baron, education director of the North Carolina Symphony.

The symphony started its annual visits back in the 1970s, and the tradition persists thanks to support from the Salisbury Symphony, the Robertson Family Foundation and the Margaret C. Woodson Foundation. While the symphony performs across the state, Baron said the group loves to visit Salisbury.

With patience and a flair of humor, Schulz introduced students to famous composers such as Beethoven and musical concepts like rhythm and tempo.

They’re lessons that music teachers across the county have been focusing on for months. Eden Sloop, a music teacher at Granite Quarry and Rockwell elementaries, said she started introducing students to classical music in January.

Her students have spent the past few months studying classical music and composers — as well as practicing their recorder skills for a performance of “The Longleaf Pine” alongside the symphony.

“They were so excited about it. They couldn’t wait,” she said.

The concert was many students’ first exposure to classical music or a live performance.

“It’s so different from watching it on video,” Sloop said.

“I thought it was really cool because I really like music,” said Alex Hedenskog of Granite Quarry.

Alex is familiar with classical music and said her favorite composer is either Beethoven or Brahms.

Salisbury Symphony Executive Director James Harvey is a living example of how much impact the performance can have. Harvey said he remembers going to see the symphony when he was a fifth-grader at Granite Quarry Elementary School.

“I remember it being a big deal,” Harvey said.

Like many students, it was the first time he’d seen an orchestra give a live performance. The experience sparked something.

“I want to do that,” Harvey said he remembers thinking.

The very next year, in sixth grade, Harvey joined his middle school band. Harvey described the experience as “planting seeds” for a love of music. And it’s one he hopes that today’s fifth-graders’ will share.

“It’s really looking after the future of orchestral music,” he said.

Farmers not yet sure how yo-yoing temperatures and snow…