NC Central is one and done in NCAA Tournament 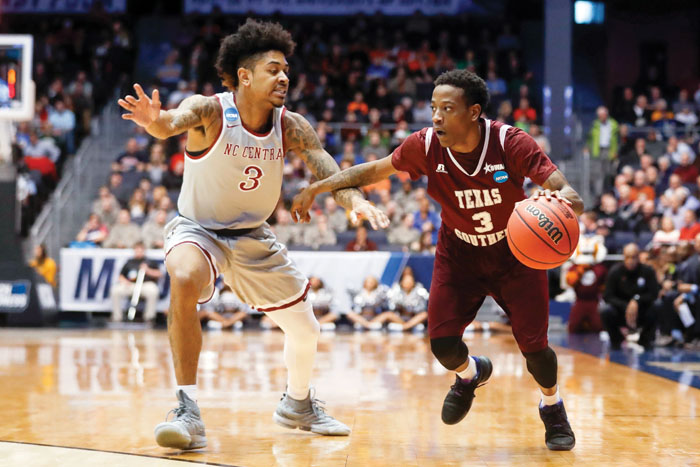 Playing all but the last minute or so of the game, the sophomore dynamo scored 25 points, pulled down eight rebounds, flexed and crowed as Texas Southern got its first ever NCAA Tournament win, a 64-46 rout of North Carolina Central in a First Four game at University of Dayton Arena.

No. 16 seed Texas Southern (16-19) also became the first team with a losing record to win a tournament game. The Tigers started the season 0-13 against a big-boy schedule — the worst start for a tournament team in NCAA history — and didn’t win a game until Jan. 1. Now they’re moving on to face No. 1 seed Xavier on Friday.

Donte Clark had 18 points and Trayvon Reed added 10 points and eight boards for Texas Southern, a historically black college in Houston. The Tigers slipped into the First Four by getting hot and winning the Southwest Athletic College Tournament, only to be paired with Mid-Eastern Athletic Conference Tournament winner N.C. Central, another historically black school that was making its second straight appearance in Dayton for a play-in game.

Both the conferences get an automatic bid every year but rarely have to play each other.

N.C. Central (19-16) was led by Raasean Davis with 19 points, part of a starting five that included a pair of true freshmen guards and a walk-on.

Texas Southern led by 10 at the half on Jefferson’s 17 points. The sophomore, who along with Miami’s Chris Lykes is the shortest player in the tournament, tied the score at 10 with a jumper, then fed an alley-oop pass to Reed for a monster dunk and followed with a layup to cap an 8-0 run. The Tigers wouldn’t relinquish the lead.

The Eagles hurt themselves with terrible shooting, especially in the second half. They shot just 30.4 percent for the game — including 0 for 14 from 3-point range.

N.C. Central: Eagles got back to the First Four again despite losing all of last year’s starters. But they couldn’t keep up with Jefferson and his mates in what was considered to be this year’s national championship of historically black college basketball.

Texas Southern: Tigers started the season horrendously with one of the toughest non-conference schedules in the country but went 12-5 in the conference, winning the last seven. Tempered by November and December opponents that included Gonzaga, Ohio State and Kansas, they were ready for Wednesday.

“You can’t train your brain to stay focused unless you go through some tough times,” coach Mike Davis said. “And that’s why I designed my schedule the way I designed it, for us to get better and for us to be tough as a team.  So if you noticed, nobody on this team celebrated. Nobody jumped up and down, high-fiving. We did the same thing in our conference tournament.”