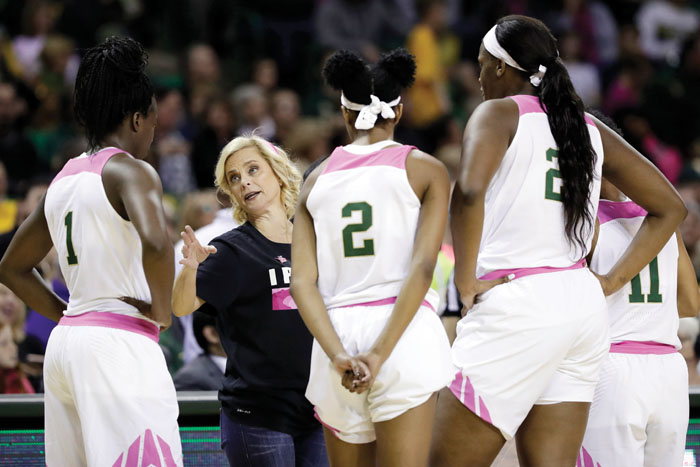 FILE - In this Feb. 17, 2018, file photo, Baylor's Dekeiya Cohen (1), Didi Richards (2), Kalani Brown (21) and Alexis Morris (11) listen as head coach Kim Mulkey, second from left, instructs them during a time out in the second half of an NCAA college basketball game against Kansas, in Waco, Texas. While so much is the same as usual in March for the Lady Bears, this has been the most heart-wrenching season off the court for coach Kim Mulkey. (AP Photo/Tony Gutierrez, File)

WACO, Texas (AP) — Another 30-win season, another Big 12 championship and another NCAA Tournament opener at home for No. 2 Baylor.

While so much is the same as usual in March for the Lady Bears, this has been the most heart-wrenching season off the court for coach Kim Mulkey.

“I’ve shed more tears with this team than any team I’ve ever shed, because that’s their personality,” Mulkey said. “We have to address the things that pop up in order for them to move on, and it’s just been one after another. And I don’t know that any of us have had time to really take a breath.”

The Lady Bears have gone through the loss of Mulkey’s first grandchild, the death of a former championship-winning player to cancer and other real-life issues off the court that athletes, like all college kids, sometimes face when away from home. There have also been season-ending injuries.

“We definitely saw a different side of her, definitely a more emotional side,” senior forward Dekeiya Cohen said. “Just seeing her come from a tough place … and come coach us every day, and she says we’re the highlight of her day a lot. Just seeing that side of her, and hearing her talk like that, it definitely means a lot to me.”

Through it all, the Lady Bears (31-1) swept through Big 12 play for their eighth straight regular season title, then won their eighth conference tournament the last 10 seasons. They open NCAA play at home for the sixth year in a row Friday night as the No. 2 seed in the Lexington Regional against Grambling State (19-13).

“We just like each other off the court, so we’re real close as a team,” said junior center Kalani Brown, the Big 12 player of the year. “When adversity comes, we just band together, laugh together, we cry together. And I think that’s why we’ve been so successful.”

Only a week into the season, Mulkey’s daughter, Makenzie Fuller, a former Lady Bears player now on her mother’s staff, lost her unborn child about 18 weeks into her pregnancy. The baby with two life-threatening birth defects had no heartbeat when Fuller went to a doctor’s appointment, and the baby girl was delivered after labor was induced.

In January, former Baylor player Chameka Scott died of colon cancer at age 33. Scott was one of Mulkey’s first recruits and the player the coach called “the heartbeat” of their 2005 national championship team.

Baylor goes into the NCAA Tournament without senior guard Kristy Wallace, who returned home to Australia to have the national team doctors there examine the torn right ACL she sustained in the final regular-season game. Freshman guard Trinity Oliver tore her left ACL a month into the season.

Sophomore forward Lauren Cox missed a game while hospitalized with complications from diabetes, a disease she has dealt with since she was a young kid. Cox then found out recently that her younger sister, who is still in high school, has also been diagnosed with diabetes.

The only loss by the Lady Bears was at then-No. 8 UCLA on Nov. 18, when Mulkey stayed home with her daughter while Cox was hospitalized.

The week before Christmas, the team got stranded on the side of the interstate in the middle of the night. Their flight home from a game got diverted from foggy Waco to an airport in Dallas, about 100 miles from campus, and they were on a bus that caught fire. Nobody was hurt, but they had to wait for another bus to pick them up.

“When you have a team that has that kind of chemistry and that kind of camaraderie, you count your blessings,” he said. “Because you can coach a lifetime and never have kids like that.”