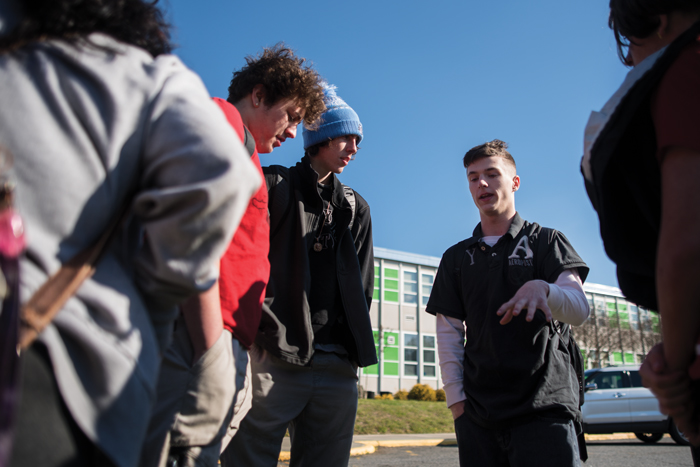 Trystan Athey, 15, right, talks to classmates about the AR-15 during the walk out at North Rowan High School on March 14, 2018. (Photo by Rebecca Benson)

SALISBURY — Wednesday marked one month since the shooting in Parkland, Florida, took the lives of 17 people at Marjory Stoneman Douglas High School.

In response, students across the nation walked out of their classrooms for 17 minutes at 10 a.m. Wednesday. Their hope? To bring attention to what they see as a growing need for gun law and school safety reform.

“I just want to know when I’m coming to school that I’m going to return the same way I left home,” said Makiya McDaniel, a freshman at North Rowan High School who participated in the peaceful protest.

“I think if they see more than just one school in the community doing it, something will happen, hopefully,” said North Rowan junior Ashley Price.

Hundreds of students participated in the walkout throughout Rowan County and Kannapolis, with some schools offering alternative means for students to voice their concerns.

At Jesse C. Carson High School, students worked with administrators to set up a “walk-in,” where participants gathered in the gym for 17 minutes of silence.

The group then wrote letters discussing their concerns.

A.L. Brown High School hosted a rally-style gathering in the gymnasium, complete with songs and speakers.

About 60 students walked out at Salisbury High School, according to witnesses.

For many students, the desires are the same: They want Congress to pass legislation for more comprehensive background checks for all gun owners.

“In an ideal world, I think guns should be regulated to where only certain people could have them,” said Trystan Athey, a sophomore at North Rowan. “I think the background check should go more in depth, all the way from where you were a kid. Because, obviously, problems start when they’re small and grow bigger.”

Others wanted restrictions to go even further. Josh Mason, a North Rowan senior, said he thinks only military personnel should have weapons.

The desire for gun law reform and increased school safety measures were not unique to the student body. Administrators expressed support for the students speaking out but had their own additional concerns.

Jonathan Clark, assistant principal at North Rowan, said the school has concerns about safety with the students being outdoors.

The walkout gained national attention, he said, and the school didn’t want anybody to take advantage of or potentially harm groups of students outside.

“We want them to be able to speak out. That’s what we teach them the whole time, to learn to advocate for themselves,” he said. “Please, advocate for yourself, but do so in a setting that’s not going to put you in danger.”

North Rowan administrators offered the auditorium as a place for students to voice concerns without repercussions. But nearly 40 students declined the offer and were given in-school suspension after they left the school building without permission.

This was a districtwide policy, said Clark and North Rowan staff member Angela Alford, not a decision made by the school alone.

“Surprisingly enough, even with the consequences, nobody fussed about it,” said Alford. “They’re pleased with their decision.”

While many felt positive about their efforts, some students said they think nothing is going to change because of the walkout.

“I don’t see the schools changing anything,” said Athey. “We still only have one resource officer. We have no metal detectors.”

But administrators said security updates are happening. North Rowan High School recently changed the entrance to the school to a limited area where all guests must check in.

Other security processes and safety protocols have been updated, said Clark, and faculty and staff are working to make sure they are prepared for a multitude of crisis situations.

“We’ve been active just to make sure that we keep our kids safe,” said Clark.

“Students are becoming politically active at a younger and younger age,” Moody said. “… We need to wrestle with … how we can give students a voice in an intelligent way as we move forward in the future … because I think we will see more and more of this.”