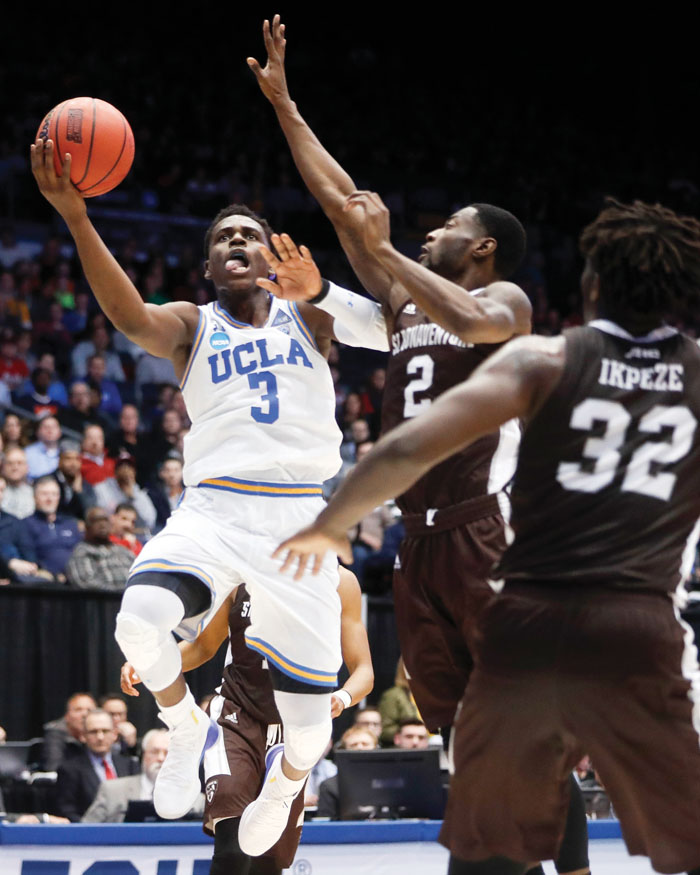 DAYTON, Ohio (AP) — Courtney Stockard returned from a hamstring injury and scored 26 points, and Jaylen Adams made a jumper and three free throws in the final minute Tuesday night, rallying St. Bonaventure to a 65-58 victory over UCLA and its first NCAA Tournament victory in 48 years.

The 11th-seeded Bonnies (26-7) will play sixth-seeded Florida (20-12) in Dallas on Thursday night in the East region.

St. Bonaventure set a school record with its 26th win. Stockard got the Bonnies in position for the drought-busting tournament victory by leading a late 12-0 run. Adams — who missed 14 of his first 15 shots — closed it out in the final 49 seconds.

UCLA (21-12) bristled at having to play in the First Four for the first time in its history — the Bruins have been to 18 Final Fours. They had trouble making shots against the Bonnies’ zone defense and had 20 turnovers, a disappointing ending to a season that started with an international incident.

Freshmen Jalen Hill, Cody Riley and LiAngelo Ball were accused of shoplifting during a trip to China in November. All three were suspended for the season, and Ball left the school.

UCLA’s Aaron Holiday led the Pac-12 in scoring but couldn’t put his touch on the First Four game. He scored 20 points but had 10 turnovers, including two pivotal ones in the final minute when he fouled out.

Adams is the Bonnies’ all-time leading scorer as a guard but had a rough time as well until the final minute. He finished with eight points on 2-of-16 shooting.

The undersized Bonnies lack depth and were glad to get Stockard back from the hamstring injury. He’s scored 21, 31, 22, 19 and 26 points in the last five games.

DAYTON, Ohio (AP) — Carlik Jones had a substantial and loud cheering section at University of Dayton Arena, a lot of folks traveling about an hour up Interstate 75 from his Cincinnati hometown to see him play for Radford in a First Four game.

Jones didn’t disappoint them. The redshirt freshman guard was the engine that drove the Highlanders, scoring 12 points to go with career highs in rebounds with 11 and assists with seven as Radford beat LIU Brooklyn 71-61 on Tuesday night to get its first-ever NCAA Tournament win.

“It’s just big to be able to come back home and perform in front of my family and friends that haven’t been able to see me play,” Jones said. “And it’s just been a good feeling.”

Radford didn’t play its prettiest game, but the team from rural southwest Virginia will celebrate briefly before heading to Pittsburgh to play No. 1 seed Villanova on Thursday. The Big South champion Highlanders are making their third tournament appearance and first since 2009.

Despite hitting just 7 of 23 shots from the floor in the second half, LIU Brooklyn managed to stay within striking distance, even taking the lead briefly early in the second half. The Northeast Conference champion Blackbirds got to within a point with five minutes left, but a 9-1 surge by the Highlanders opened up the lead.

“We remained calm,” Polite said. “Basketball is about a game of runs. So we knew they’re a good team, so they’re going to make shots. So we just had to remain focused and go with the game plan. And that’s to pressure them even though they’re a fast-paced team and don’t give them any easy baskets.”

The Blackbirds went without a field goal in the last seven minutes of the game and shot 30.4 percent in the second half. Each team committed 15 turnovers.

“I thought (Radford) did a nice job grinding it out on the offensive end of the floor and taking time off the clock to where we couldn’t get moving.” LIU Brooklyn coach Derek Kellogg said.

Jashaun Agosto scored 16 points and Raiquan Clark added 14 for LIU Brooklyn, which is winless in seven trips to the tournament.

Radford led 30-28 at the end of a sloppy first half after leading by as many as nine. The Blackbirds scored 11 of their points on nine turnovers by Radford but were just 3 for 13 from beyond the 3-point line in the half.

LIU Brooklyn: Got hot in the NEC Tournament but couldn’t sustain it on the big stage, shooting just 38 percent compared to 47.5 percent for Radford.

Radford: At times the Highlanders looked like they didn’t want it, either, but they played better in the second half on the back of Jones.

The Highlanders’ defense helped limit LIU Brooklyn’s leading scorer, Joel Hernandez, to just eight points. Averaging 20.9 points per game during the season, Hernandez was just 3 for 11, including 1 for 5 from the 3-point line.

“He’s so strong and he can score in a variety of ways,” Radford coach Mike Jones said. “We knew we weren’t going to shut him out. He had 32 in their championship game and just willed their team. And when he hit that shot at the end of the first half, we told our guys, hey, understand now he’s coming at you with both barrels blazing in the second half. And we just tried to make it tough on him.”

LIU Brooklyn: On to next season.

Radford: Faces No. 1 seed Villanova in the first round of the tournament on Thursday.