Students walking out over guns put us all to shame 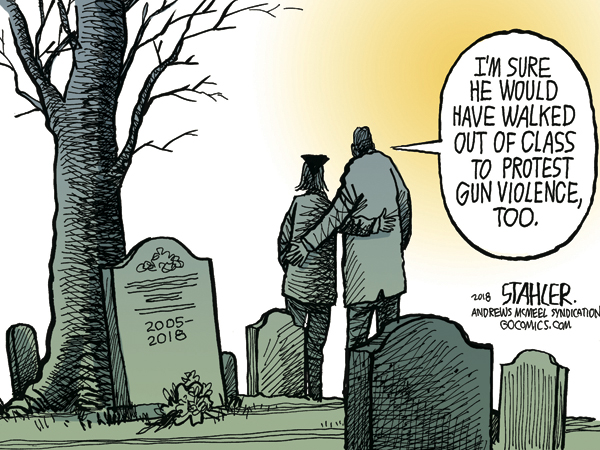 A huge number of students across the United States left their classes Wednesday morning to remember the victims of last month’s Florida shooting and to show their support for gun-control legislation. As The Washington Post said today, the National Student Walkout is “unprecedented in recent American history.”

Let’s be clear about what’s going on here. Since the shooting at Marjory Douglas Stoneman High School in Parkland, Florida, in which 17 people, mostly young, were killed, students have used social media, confronted politicians and worked with established organizations to build a nationwide movement for gun control. It may be the most vital and strong such movement we’ve seen in years.

On Wednesday, students walked away from their desks not just at high schools, but at colleges and even elementary schools to participate in the event, which has been dubbed The National Walkout Day.

In Portland, Maine, where schools were closed due to a severe snow storm, two dozen students from King Middle School arranged to meet at nearby Monument Square. In Alexandria, Virginia, several dozen children, many of whom were met by their parents, walked out of a local school in an action led by two 11-year-old students.

“In the beginning, our principal wasn’t completely supportive but by the second or third day of doing this, that week, he was completely supportive,” one protester told the Guardian. “Nobody expects a bunch of 10- and 11-year-olds to stand up and start walking out of the school building.”

While the protests were larger in the blue states where they enjoy strong support from adults, others walked out in smaller numbers. At a high school in Marietta Georgia, where the school’s 1,000 students were reportedly “warned against” taking part in the protest, three students left the building despite the presence of police officers meant to discourage the action.

Even corporations are beginning to join in. Viacom, the corporate parent of Comedy Central and MTV, released a statement saying, “Viacom to support courageous youth activists who have had enough of gun violence,” and allowed screens on their television channels to go blank for 17 minutes Wednesday.

Lyft recently announced they would offer students complementary transportation to the next expected mass action, a March 24 march on Washington and in other cities called March for Our Lives.

As this shows, not all this action is taking place without adult assistance. The mass action Wednesday was initially planned by the organizers of the Women’s March. This has led some to claim that students are being manipulated by greater adult leftwing forces: Fox News commentator Todd Starnes claimed the media is “cynically using a lot of traumatized teens” to attack Trump, while former Milwaukee sheriff David Clarke tweeted that some of the organizing has “GEORGE SOROS’ FINGERPRINTS all over it.”

But this idea is absurd. This movement started not with adult action, but in conversations between Parkland students in the hours after the massacre at their school, and it quickly spread to social media. It took almost everyone by surprise.

It shouldn’t have, of course. The struggle for gun regulations deserves a mass movement. The United States has more gun violence than any other first world country. We are responsible for almost one-third of mass shootings in the entire world over the past several decades. Mass shootings continue to occur even as violent crime is mostly falling in the United States. Many different types of gun regulations enjoy broad popular support.

What’s more, the issue demonstrates how politicians of both parties remain captured by interest groups and lobbyists — I’m looking at you, National Rifle Association — while selling out the wants and needs of the people who elected them. When the teenagers of Parkland — perhaps traumatized, perhaps furious — began to speak truth to power, it turned out there were millions of Americans, children and adults, simply waiting for someone to begin to demand change and refuse to accept no for an answer.

Don’t get me wrong. No one is expecting immediate movement on the issue. It’s going to be a long slog. But momentum appears to be on the side of the teens. And little wonder: they possess more energy and enthusiasm, and, in the time-honored way of youth, they are less cynical about what can be accomplished. The kids are all right.

Olen is a contributor to The Washington Post and the author of “Pound Foolish: Exposing the Dark Side of the Personal Finance Industry.”