Stewart picked up by Giants; Brees stays with Saints 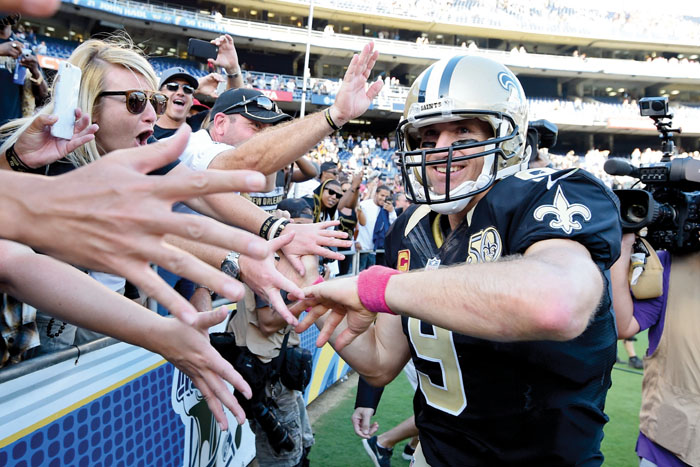 FILE - In this Oct. 2, 2016, file photo, New Orleans Saints quarterback Drew Brees reacts with fans after an NFL football game against the San Diego Chargers, in San Diego. A person familiar with the contract says Drew Brees has agreed to a two-year, $50 million extension with the New Orleans Saints. The person spoke to The Associated Press on condition of anonymity on Tuesday, March 13, 2018, because the agreement has not been announced. (AP Photo/Denis Poroy, File)

EAST RUTHERFORD, N.J. (AP) — The New York Giants have agreed to a contract with veteran running back Jonathan Stewart, who was released by the Carolina Panthers after 10 seasons.

The Giants announced the deal on Tuesday night. Terms were not disclosed.

The 30-year-old Stewart is Carolina’s all-time leading rusher with 7,318 yards, and his 51 rushing touchdowns rank second in team history.

He immediately becomes the most accomplished running back on New York’s roster. Orleans Darkwa, who led the Giants in rushing last season, is a free agent. Wayne Gallman and Paul Perkins are also on the roster.

“I am very pleased that we were able to make Jonathan a New York Football Giant,” general manager Dave Gettleman, who previously had the same job with Carolina, said in a statement. “He is a quality runner with power and speed and brings a veteran, professional presence to our locker room. He’s a terrific addition for us at this time.”

Adrian Peterson’s short stint in Arizona is over. Jordy Nelson long and productive stay in Green Bay has ended, too.

Meanwhile, Drew Brees is staying put in the Big Easy, Case Keenum is headed to the Rocky Mountains, and Kirk Cousins will make his first visit as a free agent to Minnesota. The Vikings long have been considered a natural landing spot for one of the most valuable quarterbacks available.

One day before the league’s new year begins, veteran running back Peterson was released by the Cardinals on Tuesday, and receiver Nelson — Aaron Rodgers’ favorite target — was let go by the Packers.

Seven-time All-Pro running back Peterson began last season with New Orleans but, after barely playing there, was dealt to the Cardinals.  Peterson rushed for 134 yards in a win over Tampa Bay and 159 in a win over San Francisco. In six games, he gained 448 yards on 129 carries for Arizona before being sidelined with a neck injury.

Nelson had 550 receptions and 69 touchdown catches in 10 seasons in Green Bay. But his production declined last season with Rodgers sidelined much of the year by a collarbone injury. He missed the 2015 season with a major knee injury, and then was the 2016 Comeback Player of the Year.

Brees has agreed to a two-year, $50 million extension with New Orleans, with $27 million guaranteed the first year, two people familiar with the contract told The Associated Press. They spoke on condition of anonymity Tuesday because the agreement has not been announced.

Brees is 39 and wants to finish his career in New Orleans, where he has played since 2006, won a Super Bowl and led what has been one of the most productive offenses in the NFL since he and coach Sean Payton arrived.

In 2017, Brees completed an NFL-record 72 percent of his passes for 4,334 yards and 23 touchdowns against eight interceptions. He ranked fourth in the NFL in yards passing and the Saints ranked second in the NFL in total offense.

Keenum, a backup when the season began, guided Minnesota to the NFC North title and then into the conference championship game. He’ll cash in with the Broncos.

The 30-year-old Keenum is considered the second-best QB available in free agency after Cousins. He went 11-3 with 3,547 yards passing, 22 touchdowns and seven interceptions. His last-second throw to Stefon Diggs stunned the Saints 29-24 in the playoffs.

Six years ago, GM John Elway landed Peyton Manning, the biggest free-agent prize in NFL history, following his release by the Colts and a series of neck fusion surgeries.

The Jets and Cardinals also made sense as fits for the 29-year-old who played consecutive seasons for Washington on franchise tags. New York, however, re-signed last year’s starter, veteran Josh McCown, and Arizona made a deal with Minnesota’s Sam Bradford.

The 24-year-old Watkins intends to sign a $48 million, three-year contract with $30 million in guarantees, while the 25-year-old Hitchens agreed to a five-year deal, two people familiar with their decisions told the AP. The Chiefs have needed to pair a playmaking wideout with Tyreek Hill. Watkins, the 2014 fourth overall pick of the Bills, spent last season with the Rams, where he caught 39 passes for 593 yards and eight touchdowns.

— Receiver Albert Wilson is closing in on a $24 million, three-year deal with the Dolphins. Miami traded top receiver Jarvis Landry to Cleveland and has a need. They also are near an agreement with Patriots receiver Danny Amendola.

Receiver Marqise Lee has agreed to re-sign for a four-year deal worth $38 million.