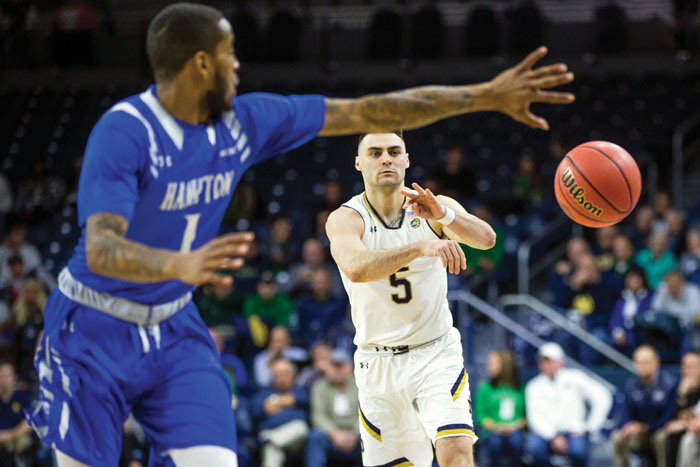 Notre Dame's Matt Farrell (5) dishes out a pass against Hampton during an NCAA college basketball game in the first round of the NIT tournament, Tuesday, March 13, 2018, in South Bend, Ind. (Michael Caterina/South Bend Tribune via AP)

SOUTH BEND, Ind. (AP) — Martinas Geben and T.J. Gibbs combined for 35 points, Bonzie Colson had a double-double and Notre Dame cruised to an 84-63 win over Hampton on Tuesday night in the opening round of the NIT.

Colson and Geben had back-to-back 3-point plays late in the first quarter for a 23-12 lead. The Bears scored eight straight late in the second quarter and trailed by 12 at the half but a 13-3 Irish run in the third quarter decided the game.

Notre Dame will host the winner of Wednesday’s game between Temple and Penn State in the second round.

Hampton shot 30 percent and Notre Dame 42 percent in a game that featured 104 rebounds but only 17 turnovers and 24 free throws.

Jermaine Marrow had 21 points to lead the Bears.

Landale scored 11 points in the first quarter as Saint Mary’s opened a 19-8 lead and he had three points in a 12-0 run at the start of the second quarter for a 31-11 advantage. The Gaels, a top seed, led by at least 18 points the rest of the way and by as many as 44. They will play the winner of Wednesday’s Washington-Boise State game in the second round.

Jordan Ford added 19 points with three 3-pointers for Saint Mary’s (29-5) and Calvin Hermanson scored all 17 of his points in the first half with five 3-pointers. The Gaels matched their program-record win total from last season.