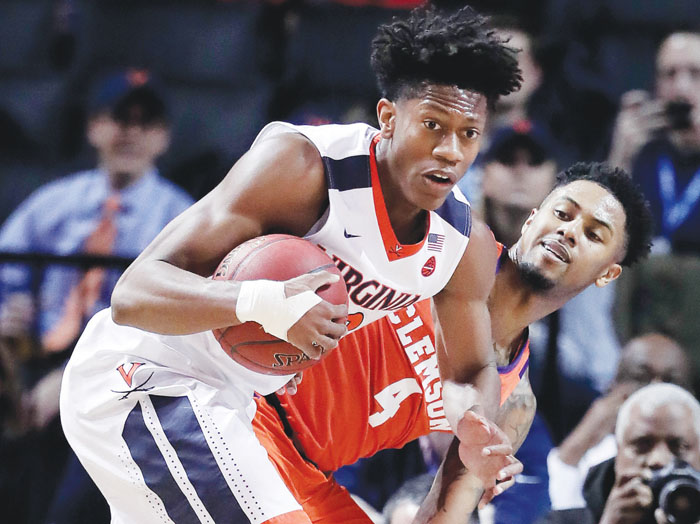 FILE - In this Friday, March 9, 2018, file photo, Virginia guard De'Andre Hunter (12) pulls down a rebound next to Clemson guard Shelton Mitchell (4) during the first half of an NCAA college basketball game in the semifinals of the Atlantic Coast Conference tournament in New York. Hunter, the ACC's sixth man of the year, will miss the NCAA tournament with a broken left wrist. The school says Hunter suffered the injury during the ACC tournament, but did not say how. (AP Photo/Julie Jacobson, File)

Top-ranked and top-seeded Virginia will be without forward De’Andre Hunter, the ACC’s sixth man of the year, for the NCAA Tournament because of a broken left wrist.

The school announced Tuesday that Hunter, a 6-foot-7 swingman who can also play guard, suffered the injury during the ACC Tournament, but did not say how. He will have surgery Monday and miss 10 to 12 weeks.

Hunter, a redshirt freshman, sat out last season, but made an immediate impact once he joined coach Tony Bennett’s lineup. He averaged 9.2 points and 3.5 rebounds in 33 games, reached double figures 16 times and led the Cavaliers in scoring on six occasions. His scoring high was 23 points in his fourth game, a 73-53 victory over Monmouth on Nov. 19. He recorded 14 points and 10 rebounds in a 66-37 victory at Pittsburgh on Feb. 24.

Hunter also had several big moments for Virginia (31-2) late in the year. He banked in a buzzer-beating 3-pointer at Louisville on March 1 to cap an improbable comeback in a 67-66 victory, and then made several critical free throws in the final minutes of the ACC title game as Virginia held off North Carolina, 71-63.

This is the second straight year they have lost a key player late in the season.

Last year, forward Isaiah Wilkins, this year’s ACC defensive player of the year, missed time with an illness. He played just 5 minutes in a first-round victory against North Carolina-Wilmington in the NCAA Tournament, and then not at all when Virginia lost 65-39 to Florida in the second round.