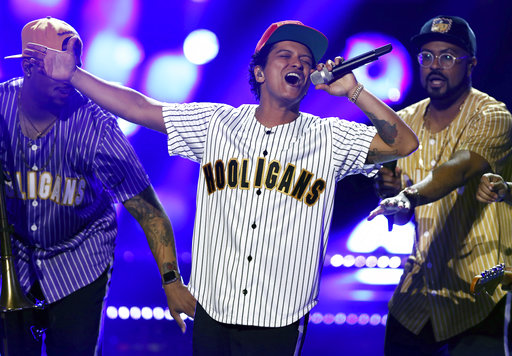 Bruno Mars performs "Perm" at the BET Awards at the Microsoft in June 2017 in Los Angeles. (Photo by Matt Sayles/Invision/AP, File)

“Cross-cultural influence,” would be the less pejorative phrase. But the term above, with its connotations of grand-theft culture, is the one favored by some African-American activists who’ve had it up to here with nonblack performers borrowing the soul and style of Michael, Marvin and Prince. Singer Bruno Mars is the latest to feel their ire.

Mars, son of a Filipina mom and a Puerto Rican/Ashkenazi Jewish dad, has been ubiquitous in recent years with a high-octane style fueled by hip-hop, funk and other African-American idioms. A few days ago, he was the object of a heated debate on The Grapevine, an internet series on African-American issues. Panelist Seren Sensei ripped him a new one.

Twitter lit up like a Christmas tree. Mars was defended by many African Americans, including R&B legend Charlie Wilson, who called him “a genuine talent, pure and simple.”

Of course, nothing is ever pure and simple when it comes to this question of who has the “right” to exploit black culture. In her rant on The Grapevine, Sensei left the impression she thinks this is a new argument. It’s not.

To the contrary, it goes back through Eminem and Vanilla Ice, through Hall and Oates and Elton John, through the Doobie and Righteous Brothers. It goes back through Memphis music impresario Sam Phillips, who famously mused: “If I could find a white man who had the Negro sound and the Negro feel, I could make a billion dollars.” Then Elvis walked into his life.

But it goes back before Elvis, too, back to swing-era titans like Benny Goodman, and before that, to white vaudevillians performing in blackface. For both good and bad (i.e., blackface), the mimicry of African-American soul and style has always been a staple of American culture, particularly in music.

Would we want it any other way? Do we really want to say that one may not paint a picture, dance a dance or sing a song from outside one’s own culture? If that’s a world without Bruno Mars, well, it’s also a world without country-music star Darius Rucker, heavy metal artist Ice-T and opera singer Leontyne Price.

You can’t put art in a straitjacket. That’s what makes it art.

Moreover, culture is an exchange, a give and take. And in this polyglot nation, you could no more restrict the influence of African-American music to African-American people than you could strain out the Kool-Aid powder after it hits the water.

Yes, I take Sensei’s larger point: America has a long history of preferring black culture without the inconvenience of black people. That’s why Phillips was right, and Elvis reached heights unthinkable for Little Richard and Chuck Berry. It might also be why Mars won a Grammy that Prince never did.

Which speaks to the endurance of the color-coded rules by which advantage and disadvantage have always been meted out. In other words, racism. But that will still be here if Bruno Mars goes country tomorrow.

So it’s pointless to be angry with him over “cultural appropriation.” If you want to be angry, be angry that there remains some truth in what Sam Phillips said, over 65 years later.

Make a liar out of him, and everything else will take care of itself.