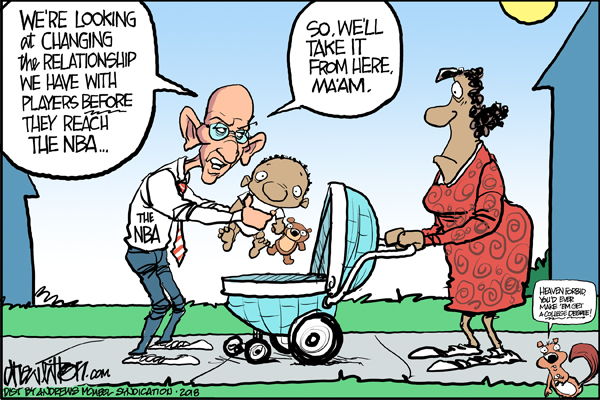 This week in the middle of all the basketball madness, we put aside the hard fact that we are loving our favorite game to death.

And, even when we acknowledge what is happening, we blame the wrong people for college basketball’s coming implosion.

Our favorite game is, for many North Carolinians, college basketball. Duke, State, Carolina, and Wake Forest, of course. They are not alone. Lots of other favorite teams bring joy and agony this time every year. But these teams and the NCAA are blowing up the bubble with explosive gas made up of greed and money. These wonderful teams that we love are, as a group, taking themselves into moral bankruptcy.

It will happen unless those who love college basketball insist that the people in charge make the changes necessary to insure the game’s survival.

College basketball is not sustainable if its teams are simply money-making businesses composed of paid professional players.

Last week, Tim Reynolds, writing for the Associated Press, reported, “A federal investigation into college basketball revealed what many suspected and others knew: Plenty of recruits and players are getting paid, and the scandal the game is facing right now will likely be felt for years to come.”

Last week the Washington Post reported that N.C. State “has received a grand jury subpoena seeking records as part of the Justice Department’s investigation into corruption in college basketball.”

As a part of the department’s ongoing investigation, assistant coaches at Auburn, Arizona, Southern California and Oklahoma State have been arrested and accused of taking bribes from a financial advisor and an aspiring NBA agent. According to the Post, “Federal prosecutors also have alleged, in court documents, that coaches at Louisville and Miami, later identified as Rick Pitino and Jim Larranaga, were involved in arranging bribes for recruits.”

The investigation may be hanging over the celebration of college basketball we call March Madness and the Final Four as it begins this week. But it is hardly noticeable as America stops for loyal fans to fill out their brackets, crowd into arenas all over the country, and turn on television to follow the basketball playmakers.

The fans are paying as much attention to the growing scandal as passengers on the Titanic did to an iceberg looming in the ship’s pathway. As ESPN commentator Jay Bilas told the New York Times’s Joe Drape on March 10,  “Unless your coach and program are dealing with it, nobody cares. They want the games. They want to fill out their brackets. It’s like steroids in baseball. We’ve been paying players in basketball and football, and the NCAA continues to fiddle.”

Drape continued, “What is never said, however, is that the ‘right way’ increasingly means runners and shoe representatives and envelopes stuffed with cash. It means no-show classes for the one-and-dones, who quit going to class in January anyway, knowing that they will leave campus shortly after their final tournament game.”

These one-and-dones that are at the core of the college basketball crisis demonstrate the growing disconnect between the game and the colleges. The colleges blame the National Basketball Association’s requirement that a player has to complete one year of college or be 19 years of age to be eligible to play in the NBA.

Hence, the one-and-doners who never intend to be a part of the university experience.

Maybe the NBA will change its rule someday, but the universities can cure the one-and-done problem with one change of NCAA rules: make freshmen ineligible to play on the varsity basketball teams.

Bring back the freshman teams and give the young newcomers an introduction to college basketball and time to adjust to the academic experience.

The one-and-doners can find another pathway to the pros.

And college basketball could survive to play another day.

It’s not every day that you see people doing yoga in the middle of Fulton Street. Yet a number of... read more