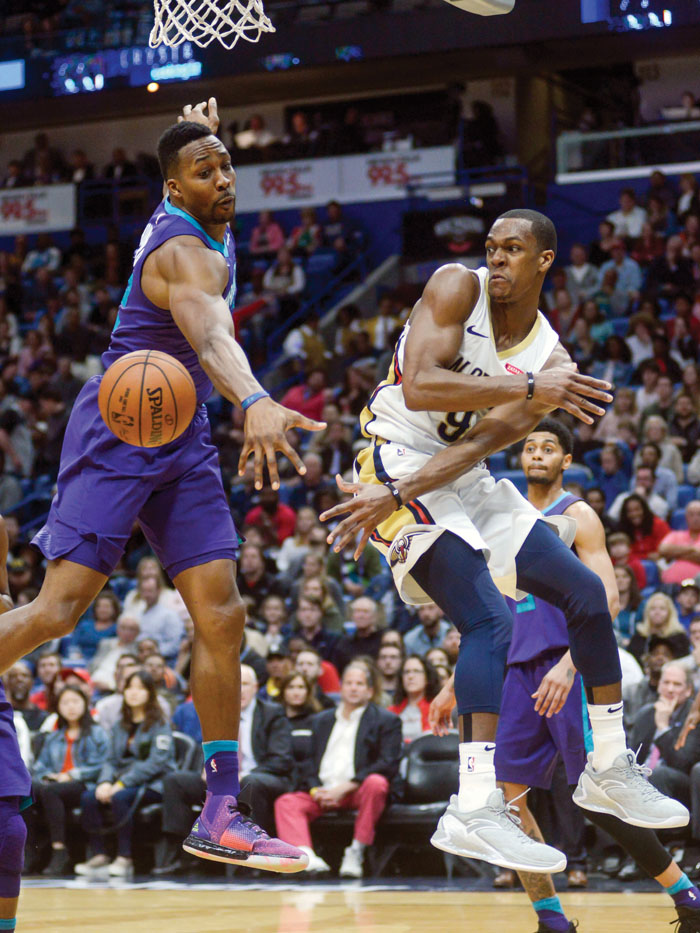 NEW ORLEANS (AP) — Anthony Davis and the New Orleans Pelicans ran their way out of a two-game skid with a relentless pace that produced a slew of shots around the rim.

“It was good to get back to that,” Davis said of a fast-paced attack that produced 78 points in the paint and 28 points on fast breaks — not to mention a handful of alley-oop dunks by Davis.

“Even when we don’t get stops, we’re able to get the ball out and run it back down a team’s throat and put them on their heels,” Davis said.

The Pelicans had scored no fewer than 114 points during their recent 10-game winning streak, but failed to reach 100 in their previous two losses.

Rajon Rondo spearheaded New Orleans’ offensive resurgence, handing out 17 assists to go with 12 points. Jrue Holiday highlighted a 25-point, nine-assist performance with 10 points in the final 2:39, starting with a 3 that put the Pelicans in front for good.

Holiday’s second 3 in that stretch widened New Orleans’ lead to five points with 1:19 to go and he added a driving finger roll that made it 117-110 with 30 seconds left.

“I just decided to be aggressive,” Holiday said. “Rondo gave me ball, so that was kind of a sign.”

Charlotte gave itself a chance for an unlikely comeback when Nicolas Batum’s steal led to Frank Kaminsky’s 3 that made it a two-point game with 4.5 seconds left. The result wasn’t sealed until Davis’ free throws with 2.8 seconds to go.

Hornets coach Steve Clifford sounded resigned to the fact that players like Holiday can take over in the clutch sometimes.

“He’s playing at the level he was when he was an All-Star” with Philadelphia in 2013, Clifford said. “This is his best year he’s had in while. He’s a handful.”

New Orleans shot 50 percent (52 of 104), with seven players scoring 11 or more. Davis gave credit for that to Rondo, who set up teammates with everything from no-look, behind-the-back bounce passes to cross-court connections for open 3s.

“He likes to push the ball, so we need everybody else to run with him,” Davis said “When you have a guy like that, it’s easier for guys to get involved and get it going.”

Still, the Pelicans needed every bit of that production in a tense contest with a Hornets team that has lost six of seven.

Both teams shot better than 52 percent in a high-scoring first half during which New Orleans never trailed, but also never led by more than 11.

The  Hornets had 42 bench points, led by Kaminsky and Jeremy Lamb, who scored 16 points.  … Shot 18 of 22 from the free-throw line. Howard accounted for three of the four misses, going 4 of 7.

… Clifford said Lamb was limited in the second half by back soreness.

Okafor and Howard barked at one another after some intense, physical jockeying for position near the basket.

“We go all the way back to 2004.  When we are on the floor, it’s a lot of trash talking and pushing and shoving, but it is all love,” Howard said of the 35-year-old Okafor, who returned this season from a neck injury that sidelined him more than four seasons. “I’m glad to see him back in the NBA and healthy again. That is big for him and he’s been playing great.”

Even with all their points in the paint, the Pelicans attempted only eight free throws all game and did not shoot a single foul shot from the middle off the second quarter until Davis’ clinchers in the final seconds.