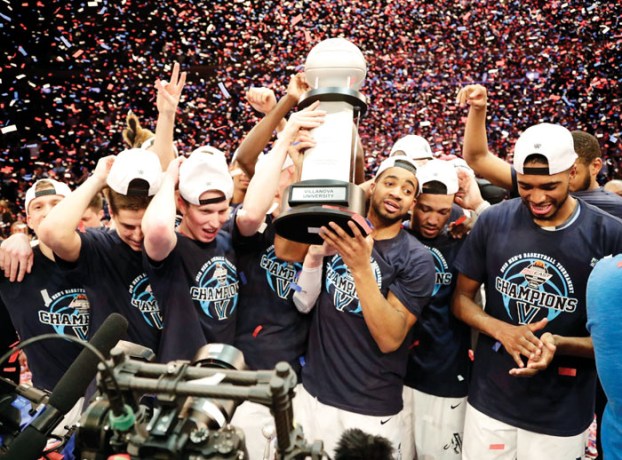 Things to know about NCAA tourney: No. 1 is remember the Alamo

Kansas, Villanova, Virginia and Xavier — the No. 1 seeds in this year’s NCAA Tournament — should remember the Alamo.

The last time all four No. 1 seeds made it to the Final Four was 10 years ago. That was the last time the NCAA Tournament wrapped up in San Antonio, and the last time coach Bill Self and Kansas cut down the nets as national champions.

Before getting to this season’s Final Four, there are 64 NCAA Tournament games to be played over the next two weeks to determine if the Alamodome will be filled with No. 1 seeds again. Or if some lower seeds, or even a potential Cinderella, make it to those national semifinal games March 31.

Here are a few things to watch with the NCAA Tournament about to get underway:

Coach K, Self and Tom Izzo keep going back to the NCAA Tournament. All have won national titles, and they’re in the same regional this season.

Mike Krzyzewski and Duke are in the NCAA Tournament for the 23rd year in a row, two more than Izzo and Michigan State.

The school with the most consecutive appearances is Kansas, which stretched its active streak to 29 in a row as the No. 1 seed in the Midwest Regional.

Self is in his 20th NCAA Tournament in a row, the 15th with Kansas after the Jayhawks won their unprecedented 14th straight Big 12 Conference championship . Before that, Self went to the NCAA twice with Tulsa and three times with Illinois.

The Spartans (29-4) are the No. 3 seed and get to stay in their home state for Friday’s game against Bucknell. Kansas (27-7) also has a short trip for the opening weekend, staying in the Sunflower State to play Penn on Thursday in Wichita, Kansas.

The Jayhawks last year beat Michigan State in the second round of the Midwest Regional, but the only way to meet this year would be if both make it to the regional final in Omaha, Nebraska.

Duke (26-7), the No. 2 seed that plays Iona on Thursday, could face a potential Sweet 16 matchup against Michigan State.

Where are the 1s?

Only twice since the 2008 tournament has the NCAA title game even been a matchup of No. 1 seeds.

That included last season in Arizona when North Carolina beat Gonzaga, a year after the Tar Heels were the national runner-up. UNC tied the 2016 title game in Texas on a double-clutch 3-pointer with 4.7 seconds left before Villanova won on a buzzer-beating 3-pointer.

Duke beat Wisconsin for the 2015 championship, the only other title game matchup of No. 1 seeds since the Jayhawks’ overtime win over Memphis in 2008. North Carolina and UCLA were the other No. 1 seeds in San Antonio.

While this isn’t Marshall’s first NCAA Tournament since the 1970 plane crash that killed 75 people, including 36 members of the Thundering Herd football team, this appearance is special for fourth-year head coach and alumnus Dan D’Antoni.

“A lot of people think the plane crash was just the football team, but I think you have to understand all the biggest supporters of basketball were on the airplane too, and we lost all of them,” said D’Antoni, who at the time was a young basketball assistant coach there only months after finishing his playing career as a Herd point guard.

Along with the players killed in the worst disaster in U.S. sports history , there were 39 coaches, administrators, community leaders, fans and crew who died when the team’s chartered jet crashed on Nov. 14, 1970, when returning from a game.

D’Antoni said he lost some close friends and a mentor in Dr. Ray Hagley, the team physician who was on the plane with his wife.

“They always wanted me to coach at Marshall,” said D’Antoni, now 70. “It didn’t look I was going to get the chance. It took 50 years for me to finally get back here, but that’s a lot of what it meant to me, and then it’s building back the program that he really gave his life for.”

The Hurley brothers both have their teams in the NCAA Tournament . The only way they can match up against each other is if Arizona State and Rhode Island both make it to the Sweet 16.

Bobby Hurley’s team at Arizona State would have to win an extra game to get there. The Pac-12 Sun Devils (20-11) have to play in the First Four in Dayton, Ohio, on Wednesday against Syracuse.

Rhode Island (25-7), an at-large team from the Atlantic 10 coached by Dan Hurley, plays Thursday against Oklahoma.

Wildcats in the south

Four teams of Wildcats are in the South Regional. Three of them play first-round games in the same arena.

No. 5 seed Kentucky plays No. 12 Davidson on Thursday in Boise, Idaho. The winning Wildcats in that game face a potential second-round matchup against the Arizona Wildcats, the No. 4 seed that plays Buffalo in another first-round game in Boise.

The other Wildcats in that regional are No. 9 seed Kansas State, which takes on Creighton on Friday in Charlotte.

AVONDALE, Ariz. (AP) — Kevin Harvick is at his best when he’s mad, so much so that former crew chief... read more