Schools dismissed due to weather 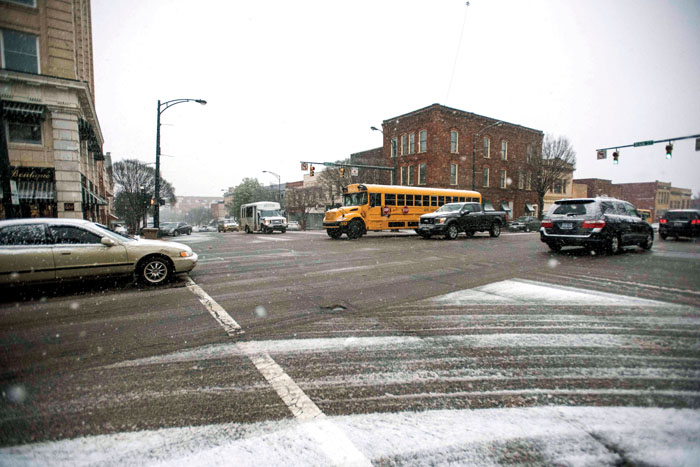 SALISBURY — It didn’t take schools long to close their doors Monday after an unexpected storm dropped ice and snow on county roads.

Rowan-Salisbury Schools dismissed students at 10 a.m. Monday, just a couple of hours after the day started. Public Information Officer Rita Foil said the decision was not an easy one.

“(Administration) began looking at this particular weather situation probably week,” she said. “…But it was on and off.”

While meteorologists warned of the possibility of a late snow, specific predictions fluctuated. Some reports called for snow, others for rain or a mix — and some reports said the wintery weather wouldn’t move in until late afternoon.

“There didn’t seem to be any real sure thing about what was gonna happen,” Foil said.

School administration stayed in touch with emergency services and with districts across the state; and when it became clear that snow was moving in faster and fiercer than predicted, Superintendent Lynn Moody made the call.

Once all students left, each school’s staff was dismissed for the day. Per district policy, staff have the option of spending the day working from home, staying at the school building and using the remainder of the day as a work day, making up the time over a weekend or participating in professional development.

All afternoon and evening activities were cancelled. The Rowan-Salisbury Board of Education, which was scheduled to have its monthly work session Monday at 1 p.m., chose to cancel the meeting.

But Rowan County schools weren’t the only ones to make the difficult decision to call off school. Nearby school systems in Iredell and Davie counties also released students early. Just down the road, Kannapolis City Schools also made the call to release students. The small district dismissed its middle school at 10 a.m., its high school at 10:45 a.m. and area elementary schools at 11:30 a.m.

Catawba College remained open and operated on a normal schedule Monday, citing above-freezing temperatures. But some professors chose to individually cancel their own classes.

Rowan-Salisbury Schools has not yet decided if schools will be closed Tuesday. Foil said a final decision is expected early Tuesday morning.