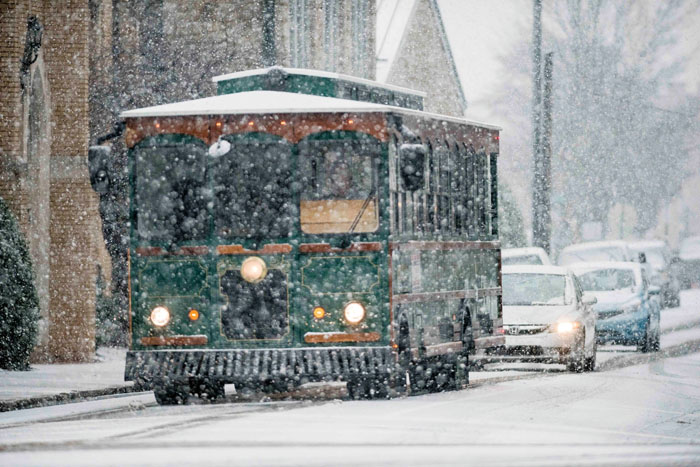 One of the trolleys was moving around downtown Salisbury on Monday morning. Snow and sleet were falling on Monday morning, forcing early closings of Rowan-Salisbury Schools. Emergency personnel responded to increasing calls for traffic accidents as the road conditions deteriorated quickly. Jon C. Lakey/Salisbury Post

Update: At 2 p.m., the National Weather Service lifted the winter storm warning for Rowan County and we have now been placed back under a winter storm advisory, meaning driving conditions could be difficult.

The snow has ended, and temperatures have risen above freezing and streets are mostly just wet, although areas in the county will still be slushy. Most of the precipitation has moved east of Rowan.

Update: With snow falling, the National Weather Service has upgraded the advisory to a winter storm warning for Rowan County. The temperature has dropped to 32 degrees.

A winter storm warning for snow means severe winter weather conditions will make travel very hazardous or impossible. If you must travel, keep an extra flashlight, food and water in your vehicle in case of an emergency.

Numerous accidents are being reported throughout the county, on NC 152, Faith Road, Millbridge Road, I-85, Old Concord Road. Use extreme caution if traveling. At one point, dispatchers requested radio silence because so many calls were coming in at once.

Could it be snow? Some forecasters think so, and the National Weather Service has issued a winter weather advisory for Rowan from 8 a.m. to 5 p.m.

Colder air is moving into the mountains, changing the rain to sleet and snow. When that cold air gets to the Piedmont, the same thing will happen, with snow accumulations possible.

A winter weather advisory for snow means periods of snow will cause travel difficulties. Be careful while you’re out and about today. If you have a accumulation, report it to the National Weather Service at 1-800-267-8101 or tweet using hashtag #nwsgsp.

The current temperature is 37 degrees, but north winds are making it feel like 31.

Rain and snow will mix early, with patchy fog forming about the same time. We’ll have north northeast wind at 8-13 mph, with gusts up to 21 mph. The high will be 38, which we have reached already. Expect temperatures to drop. Two to 4 inches of snow accumulation is possible.

Tonight will include that chance of rain and snow, plus fog, but the night will eventually clear, bringing a low of 30, meaning wet roads could turn icy by morning. West northwest wind will be around 7 mph.

Tuesday will be mostly sunny and 48, so whatever snow is on the ground should melt quickly. West northwest winds will be at 7-10 mph. It will be a clear night, with a low of 28 and northwest wind at 5-7 mph.

Wednesday will be mostly sunny, too, but cooler, with a high of 43. Northwest wind will be at 7-16 mph, with gusts as high as 23 mph. Wednesday night will be clear and very cold again, with a low of 27.

Thursday will be sunny and 59, and the low that night will be 37, beginning a warming trend.

Friday will have a 30 percent chance of rain after 2 p.m. but be mostly sunny and 62. Same chance of rain Friday night, with mostly cloudy skies and a low of 40.

And Sunday hangs on to that 30 percent chance of rain, with partly sunny skies and a high of 63.