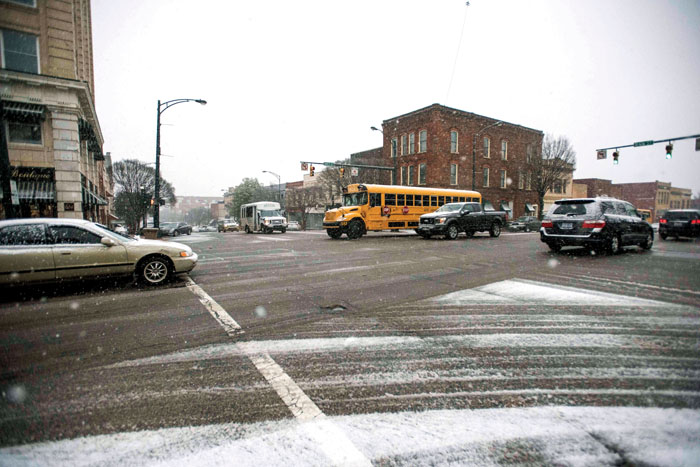 SALISBURY — The temperature was forecast to drop to 30 degrees overnight Monday, which means wet roads could turn to ice Tuesday morning, officials with the state Department of Transportation said.

Rowan-Salisbury Schools will operate on a two-hour delay Tuesday morning. The district dismissed students at 10 a.m. Monday as the snowfall intensified.

All three of those systems released students early on Monday.

All afternoon and evening school activities were canceled in Rowan County. The Board of Education, which was scheduled to have its monthly work session at 1 p.m. Monday, canceled the meeting.

Catawba College remained open, but some professors chose to cancel their own classes.

Michael Hedrick, a maintenance engineer with the DOT in Rowan County, said all the agency’s snow plows and spreaders were running first thing Monday morning and a skeleton crew would remain overnight to handle primary roads and interstates.

Hedrick said the overnight crew would hit trouble spots and spread rock salt on the roads if needed.

“We don’t foresee the interstate being a problem because it’s heavily traveled,” Hedrick said.

He said by the time crews get to roads less heavily traveled, usually the snow has melted.

“It should be 50 degrees by midday (Tuesday). The biggest thing is watching for black ice,” Hedrick said.

He advised motorists to watch their speed so they can slow down when necessary.

After it snowed off and on much of Monday, accumulations began to melt about midday. Monday morning, there were multiple vehicle accidents, but the roads were quiet later in the day.

Hedrick advises that if conditions are bad Tuesday morning, drivers should to be cautious.

“We were watching and being as ready as we could be. This time of the year is very hard to predict,” he said of the weather forecast.

He said this winter has been tough, especially the snowstorm in January.

“We’ve made all the preparations that we could make given the weather,” Hedrick said.

Hedrick said based on what he’s heard from weather forecasters, there’s a high probability of black ice Tuesday morning. He warned motorists to be cautious on the roads.

The N.C. Highway Patrol said it was bombarded with reports of accidents Monday. Local police departments also reported a number of calls.

The Salisbury Police Department reported several wrecks throughout the city, and one officer assisted state troopers. Most of the crashes involving damage to vehicles and other property.

Officials recommend that drivers be aware of curves and shady spots because those are areas where they are apt to lose control in a crash.

“Some roads could be slippery, especially bridges and overpasses. Be prepared for reduced visibilities at times,” emergency services officials said.

Photo exhibit tries to show reality of Palestine, while…