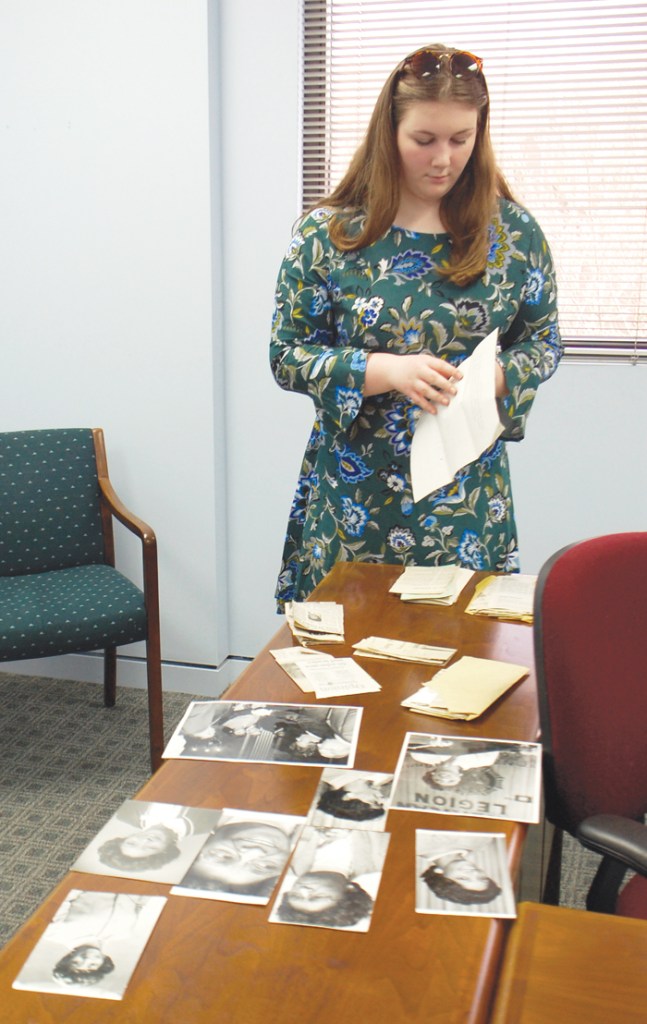 Mark Wineka/Salisbury Post Riley Costello, 15, of Warwick, R.I., goes through some of the photos and articles related to the late Elizabeth Duncan Koontz during a stop at the Salisbury Post Feb. 23. That same night at the annual Salisbury Humans Relations Council's EDK Awards program, Costello shared the 10-minute video she produced on the life and career of Koontz.

Editor’s note: This is a reprint of a story from the Warwick (Rhode Island) Beacon recounting the history project that connected 15-year-old Riley Costello of Warwick to the life and career of the late Elizabeth Duncan Koontz of Salisbury. Costello went on to produce a state award-winning video on Koontz and visited Salisbury Feb. 22 to share that documentary with the Salisbury Human Relations Council. The council was having its annual EDK Humanitarian Awards banquet that evening.

If you have never heard of Elizabeth Duncan Koontz, you are not alone, but that will change if you talk to Toll Gate High School sophomore Riley Costello — and for good reason, too.

What started as a unique project for National History Day lifted then-freshman Riley all the way to the national competition at the University of Maryland in April of 2017 and then, just a couple weeks ago on Feb. 22, she was honored with an award and presented her project as a special guest speaker to Koontz’s home town and her goddaughter, receiving red carpet treatment for her project that explored her impressive career.

According to Riley’s project, which can be viewed in full on YouTube by simply typing in Koontz’s full name, her career spanned more than 40 years and included several trailblazing moments for civil rights, women’s rights and teacher’s rights to better pay. She climbed all the way to a position as the first African American president of the National Education Association, the largest union in the country.

Despite being a Democratic, African American woman, Koontz was appointed by the Republican Richard Nixon in 1969 to become the Director of the United States Department of Labor Women’s Bureau, the first such appointment for an African American in history.

“I found her and I thought this was perfect, because a lot of people who do the project do more common topics,” Riley said. “I wanted to do it on her because nobody had ever heard of her, and her contributions to society fit perfectly with the topic of taking a stand in history.”

And so her project, “Standing Up: The Life and Legacy of Elizabeth Duncan Koontz,” began. Initially, Riley and her family were concerned because of a lack of information about Koontz that was available online.

“I had a harder time finding sources,” Riley said. “As other people are bringing in piles of books I’m like, here’s a little article about her.”

After diving deeper, the family unearthed an archive in Greensboro, N.C. at Bennett College that possessed items belonging to Koontz — the only such archive in existence. Without a second thought, Riley’s father Michael (a history teacher of 31 years in Warwick) bought a plane ticket and he and Riley were off to North Carolina during last year’s February vacation.

Thanks probably to a combination of factors — including the local area’s interest in Riley doing a story on Koontz and Michael’s experience as a professional archivist during his work with the Rhode Island Historical Society — the duo got incredible access to the unprocessed items in the archives.

“There was just piles of newspapers and plaques and awards and plane tickets and transcripts of different speeches,” Riley said. “It was cool to see all of her stuff laid out on a table and touching things that she touched.”

Riley and her dad only got to spend a couple hours in the archive, but they returned home to Warwick with a wealth of unbeatable primary sources to continue the project — the due date rapidly approaching in March.

“Her bibliography was extensive,” said Riley’s mother, Julie, also a history teacher in Warwick of 21 years.

Michael suggested to his daughter that she do a documentary-style video about Koontz’s life, as she had done in a previous project where she depicted the 1992 Warwick Teachers’ Union strike — a labor conflict famous in the city that resulted in Michael and some of his fellow teachers to be jailed for a number of days.

After completing the project — twice, actually, after an unfortunate deletion of Riley’s progress by mistake — Riley qualified for the state competition at Rhode Island College last April and won that too, despite her getting more complex questions from the panel of three judges — of which only one had actually heard of Koontz before.

“I don’t think I was necessarily there to win,” she said. “I’m from the tiniest state ever, nobody is going to pick my project, if I just teach new people about her, you know what, I won.”

After nationals had passed, Riley found and got in contact with Koontz’s goddaughter, Dee Dee Wright, via email, looking for more information about Koontz because, as Riley said with a smile reciting the slogan of National History Day, “the research is never done.”

Riley and Michael were again on a plane to North Carolina, however this time the tickets were paid for by the Human Relations Council, and the father-daughter duo were given the star treatment — including a stay in the city’s historic apartment used for business purposes, an article in the local daily The Salisbury Post and, of course, an opportunity to present her documentary at the awards ceremony.

Dee Dee Wright took a special liking to Riley, and presented her, in addition to her very own Elizabeth Duncan Koontz award, with a pearl pendant necklace owned by Koontz herself – and to top it off, the president of Livingstone College handed her a business card, informing her that she has a spot waiting for her when the time comes for choosing a college.

“The relationship that was forged is amazing, and I think it will be lifelong,” Julie said of Riley’s relationship with Dee Dee. “I’m just the birth mom. She wants to take Riley from me.”

“The community is just amazing,” said Michael, looking back on the experience. “There is such diversity and everyone was so welcoming and nice.”

“I think that Mrs. Koontz would be proud that I was able to share her story and teach people her values and how to fight and how to make an impact,” Riley said in reflection.

Spring forward — and change your batteries