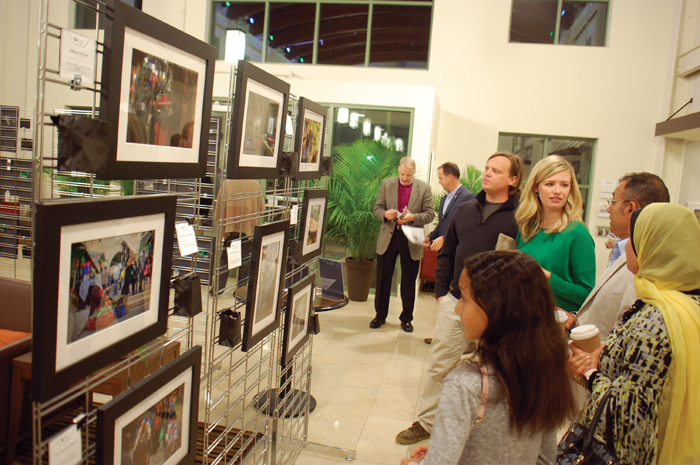 More than 20 photographs from the 10 finalists in the first annual Karimeh Abboud Award Competition in Bethlehem, Palestine, are part of the monthlong exhibit at St. John's Lutheran Church's Peeler Hall. At right, Mohamed Eliwa of Lexington and his family were among those attending an opening reception and panel discussion.

SALISBURY — The images reflect desperation and hope. They offer commentary, symbolism and dreams of life without walls. They depict refugee camps, demolition orders and children’s games in wartime.

The speak of loss, grief, burden and loneliness.

St. John’s Lutheran Church is home through March 26 for “Palestine: Unlimited,” a photography exhibit showing images from modern day Palestine as seen through the eyes of 10 young artists and media students from Dar al-Kalima University College of Arts & Culture in Bethlehem.

An opening reception for the exhibit was held Saturday night along with a panel discussion offering Christian, Jewish and Muslim reflections on the works.

The panelists, who included N.C. Lutheran Bishop Tim Smith, Dr. Mitch Siegel, Mohamed Eliwa of Lexington and the Rev. Rhodes Woolly, all seemed to agree that change for the better in Palestine and Israel can only come from a younger generation.

Plus, they saw the artists as trying to attack stereotypes the world might hold.

“There’s a strong voice present out there in that art exhibit,” Siegel said. “… I know what a label is. I don’t like it.”

Woolly, who served as the night’s moderator, said the panel and exhibit itself were an effort to invite the audience into a conversation. Polarizations now so evident in the country and world often “don’t allow us to enter into conversations that matter,” Woolly said.

Palestine means many different things to different people. It represents the land where Jesus was born for Christians. It might cause people to think of olive trees and women with bright scarves, but it also could mean warfare, violence, terrorism and a dividing wall.

“What we’re really dealing with is stereotypes,” Woolly said. “… Palestine, these days, has become a very complicated place.”

Woolly said he found the works in the exhibit “incredibly engaging.”

Overall Saturday night, the panelists talked about what the photos said to them.

Eliwa, who came to the United States from Egypt in 1996, operates an Italian restaurant in Lexington, and he and his family attend a mosque in Clemmons. He said the exhibit “takes us back home.”

“Most people see what the media show you,” Eliwa said. “We need to teach our kids there are a lot of people on the other side of the world who are suffering … The way they live (there) is unfair for everybody.”

Smith said he was captivated by the artists’ depiction of both pain and hope in children. Through his offices and ministry, Smith has had numerous opportunities to talk with Israelis and Palestinians and hear many different perspectives.

The photos reminded him of the saying that joy and sorrow always walk together. In deepest sorrow, there also is the hope “that it can’t always be this way,” Smith said.

Youth represents the voice and guide for these photographs, Siegel said, and the young are trying to send a message for coming back to a better home, that they “won’t tolerate the status quo, if there’s a way out.”

Dar al-Kima University College of Arts and Culture asked the best young photographers in Palestine to share their interpretations of the country and its people.

The more than 20 photographs on display at “Palestine: Unlimited” represent works of the 10 finalists in this Karimeh Abboud Award Competition.

Here are examples of some of the exhibit photos and what they are trying to convey:

• “Some Day,” by Mohammed al-Kurd, focuses on keys. When Palestinian refugees left their homes in 1948 and 1967, they took their keys with them, expecting to return after the war. So the keys hold memories of lost homes and symbolize the right of return.

The Palestinian mentality is that they hold the keys and someday they’re coming back, Eliwa said.

• “Checkpoint 300,” by Luay Sababa, shows the main checkpoint to enter or exit Bethlehem. It’s a crowded spot, to say the least. Palestinian workers who have obtained authorizations to work in Israel call it the “ticket to life,” but they are allowed to use only this one checkpoint to cross over.

Thousands arrive in darkness in the early morning and sometimes have to wait up to five hours to get through the lines and searches at the checkpoint. For most, the jobs on the other side of the wall help them survive the economic hardships they endure in their areas controlled by the Israeli occupation.

Smith said he first looked at this photo and thought it was a frenzied crowd desperate to get into a soccer match. He soon realized it was the checkpoint.

‘Then it was sad and depressing,” Smith said,

• “Inside a Refugee Camp,” by Jisr Al Zarqa, depicts the crowding and suffering of Palestinians in refugee camps attacked by tear gas during Israeli military incursions.

• “Our Mother Is Palestinian,” by Mohammad Shaloudi, shows a woman, trying to provide for her family, sitting in the road as a way to attract buyers for her vegetables.

• “Three Portraits,” by Alla Abu Salem, seek questions about what it means to be Palestinian and to live in a Palestine away from the daily conflict and confrontation connected to the Israeli occupation.

Salem, the artist, said, “These portraits aim at representing Palestine away from any ties, connections or expectations with themes and specific subjects. In short, it is an attempt to break the stereotype and overused image of the Palestinian person.”

The exhibit, sponsored by Trinity Oaks, is housed in the church’s Peeler Hall and is available for public inspection during normal church hours.

Eliwa offered insightful comments on “Lipstick Pen,” by Reem Awad. The artist transforms the images of her face through surrealism by painting it with lipstick, eye shadows and eyeliners.

One of her portraits includes a Palestinian flag on one side of her face and a mustache drawn on the other side. It represents Palestinian women — who have not always been treated well and given the same rights — telling the world, you took our men and land away, but we’re here to get them back, Eliwa said.

The panelists expressed doubt that either side — Israelis or Palestinians — will reach any fair, peaceful resolutions, and that’s why it will be up to younger generations to find a way.

But you can’t overlook, Eliwa said, that for Palestinians, their parents have been taken away, their land has been seized and everything around them has been destroyed.

Siegel agreed there is no equality in Palestine and that the Israel mindset operates from a perspective of 70 years ago. The old establishment has too much emotion built into this area, Siegel said.

“It’s not my generation that’s ever going to solve it,” Siegel said.