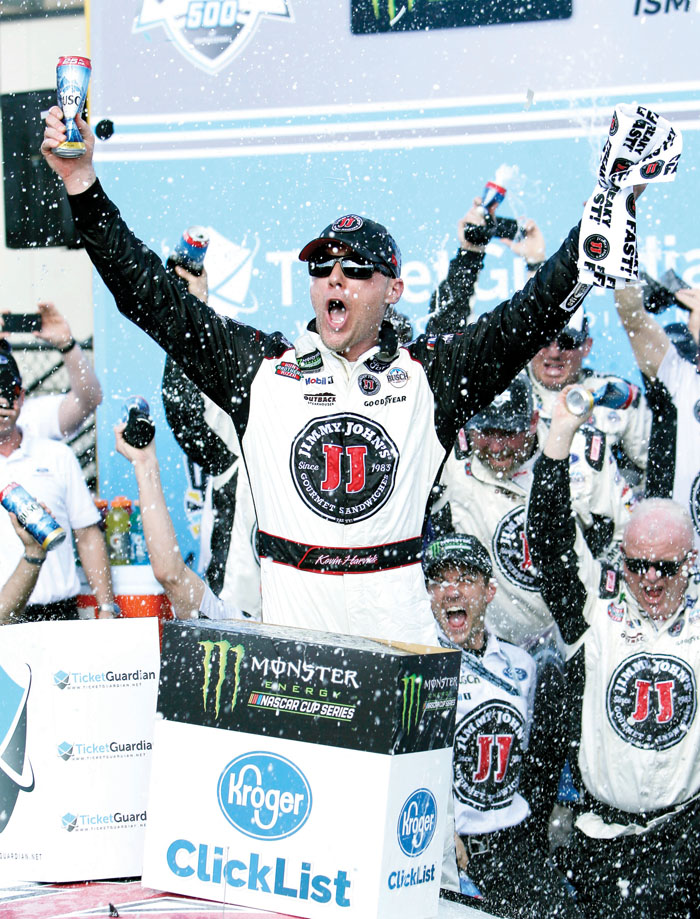 AVONDALE, Ariz. (AP) — Kevin Harvick is at his best when he’s mad, so much so that former crew chief Gil Martin used to try to rile him up during races.

Harvick was running extra hot when he got to ISM Raceway after penalties for technical violations marred his victory last week at Las Vegas. When he finally cooled off Sunday afternoon, he celebrated his third straight NASCAR Cup victory and record-extending ninth at the mile oval southwest of Phoenix.

“Everybody just came here mad, chip on their shoulder, wanting to do exactly what we did today,” Harvick said. “That’s the type of determination and grit that you want in a race team. There’s nothing better to be a part of than something like that.

“Actions speak a whole lot louder than all the words I can say this week, tweets that you can send out. Parking that thing in victory lane is the most powerful thing, most powerful message you can send, and says the most about our organization and our team.”

After saying Friday that he would jump up and down on the back of the No. 4 Stewart-Haas Racing Ford if he won, Harvick simply patted the back window in a nod to social media photos of his buckled rear window in Las Vegas.

“I made it very clear to pat my window and thank it for doing its job,” he said.

Harvick got in front of Busch on the last series of pit stops. Busch’s team dropped the jack and had trouble with the right rear tire on the stop with 53 laps left, allowing Harvick — who pitted three laps earlier — to slip ahead.

“We lost the race on pit road today,” Busch said. “But we’ve won races on pit road, too.”

Harvick took the lead with 22 laps left when Ryan Newman finally made his last stop on the sunny day after morning rain. Busch never challenged Harvick after that and finished 0.774 seconds back.

“Man, it was a heck of a battle today,” Harvick crew chief Rodney Childers said. “To sit down there in the corner and watch these guys race like that was like my short track days.”

Busch won the first 75-lap stage, and brother Kurt Busch stayed on the track during a caution and won the second segment in a one-lap shootout.

Stewart-Haas racing had all four drivers in the top 10 for the first time, with Clint Bowyer finishing sixth, Aric Almirola seventh and Kurt Busch 10th.

“It was an awesome day for us,” owner Tony Stewart said. “That’s probably what I’m most proud of.”

NASCAR said Wednesday that inspectors at its research and development center in North Carolina found Harvick’s Las Vegas car violated a rule requiring rear window support braces to hold the glass rigid, and another requiring the right rocker panel extension to be aluminum.

Harvick was penalized the seven playoff points he earned for winning the Las Vegas race and its first two stages. He was docked 20 regular points and the team lost 20 owners’ points. Crew chief Rodney Childers was fined $50,000, and car chief Robert Smith was suspended two races.

“How many appeals have you seen overturned?” he explained.

Harvick regained the points lead Sunday, moving 12 ahead of Kyle Busch. And with the victory, the No. 4 was headed back to the R&D facility.