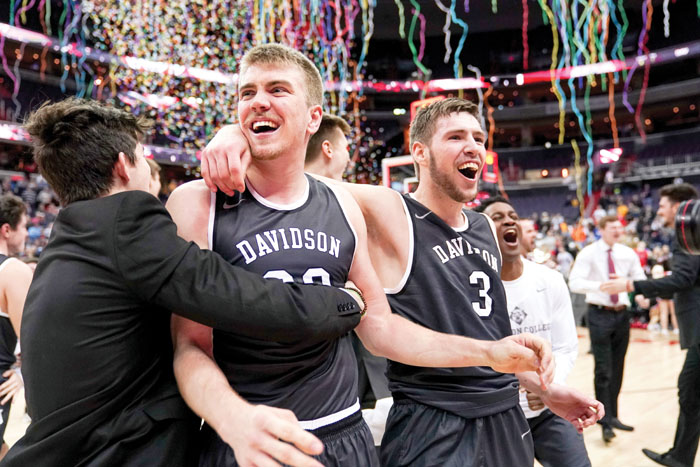 WASHINGTON (AP) — Bubble teams all across the land were keeping an eye on the Atlantic 10 Conference Tournament final and Davidson, a school still waiting for its first victory in the NCAA Tournament since a guy by the name of Stephen Curry was leading the way.

The Wildcats were all too happy to disappoint those other folks whose hopes hinged on their result Sunday.

Freshman Kellan Grady’s go-ahead baseline floater with 74 seconds left ended a nearly 13-minute drought without a field goal for Davidson, and lifted Curry’s alma mater to a 58-57 victory over 25th-ranked Rhode Island for the A-10 title.

“I would say, ‘I’m sorry,’ but I’m not,” said smiling senior Rusty Reigel, who was a freshman the last time Davidson participated in March Madness.

“We won and we’re going dancin’ and I couldn’t be happier for my guys and for everybody,” said Reigel, fiddling with a piece of the net he’d just helped cut down. “I just can’t wait to get there next week.”

Davidson (21-11) would not have gotten to join in the fun with a loss Sunday.

Top-seeded Rhode Island (25-7), though, will be in the bracket despite coming up short in its try for a second conference tourney title in a row.

That means the Rams will take a bid from someone.

“I know some of the teams on the bubble probably aren’t that happy with us right now, but we’re playing for something,” said A-10 rookie of the year Grady, who led Davidson with 17 points. “Our goal is to be playing our best in March, and we’re really confident. Not only did we get there, but we think we can win in the tournament.”

The Wildcats haven’t done that since two-time NBA MVP Curry took the 2008 squad to victories over Gonzaga, Georgetown and Wisconsin before bowing out against Kansas in the Elite Eight.

This time, Davidson beat Rhode Island despite a 0-for-11 stretch that was closed by Grady’s winning basket. After he made that, Rhode Island had its chances to retake the lead.

Among them: A baseline jumper by Stanford Robinson missed, but Grady stepped out with 10.8 seconds remaining while grabbing the rebound.

“Your heart kind of drops for a second,” Grady said. “You realize you’ve got to guard for 10 more seconds. But we did another unbelievable job.”

Reigel, whose brother is an assistant to coach Bob McKillop, saw the last opportunity for the Rams this way: “Pretty stressful. I was freaking out a little bit.”

But with Grady forcing E.C. Matthews, who led Rhode Island with 20 points and eight rebounds, to his left, the Rams senior gave up the ball. Jeff Dowtin wound up trying a 3-pointer that missed.

It was Matthews’ 3 with a little more than 3½ minutes left that capped an 11-point run and put Rhode Island ahead 56-52 before Davidson came back.

Peyton Aldridge, the A-10 co-player of the year, added 13 points and seven rebounds for third-seeded Davidson, which was playing in its first conference final since joining the league in 2014 from the Southern Conference.

“Whoever is going to draw them,” Hurley said, looking ahead to the NCAAs, “is not going to want to see their name next to them.”

Davidson: Needed this victory for an NCAA bid, given that it entered the A-10 tourney with an RPI of 74, a 108th ranking in strength of schedule and a 3-6 record against Quadrant 1 teams. Now the Wildcats get to play on, taking away an at-large berth from someone.

Rhode Island: A conference championship would have been nice, of course, but a trip to the NCAAs was going to happen, anyway. The bad news for the Rams is that they have lost four of their past eight games.

Davidson: As the 12th-seeded team in the South Region, will face No. 5 seed Kentucky (24-10), the Southeastern Conference champion, at Boise, Idaho, on Thursday.

Rhode Island: As the No. 7 seed in the Midwest Region, plays 10th-seeded Oklahoma (18-13) and freshman sensation Trae Young at Pittsburgh on Thursday.