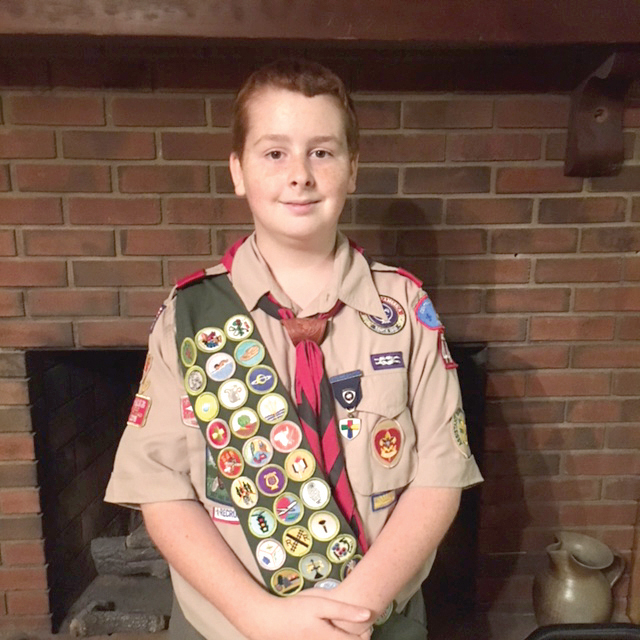 Sam joined Cub Scout Pack 306, sponsored by North Hills Christian School, in May 2010 as a Tiger Cub Scout. Over the next five years, Sam earned his Bobcat, Tiger, Wolf, Bear, Webelos I and Webelos II badges. He also earned the Cub Scout Religious Award and Recruiter Award. As a Webelos II scout, Sam earned the Super Achiever Award for earning every Cub Scout activity pin. In February 2015, Sam earned the Arrow of Light Award, the highest rank in Cub Scouting.

For his Eagle project, Sam organized and led volunteers to landscape an unused area at Brookdale Assisted Living in Salisbury. He also installed multiple tomato trellises and built two 36”H x 4’W x 8’L vegetable planting boxes for the residents to grow vegetables as an outdoor activity, with the produce to be used in the kitchen for meals. The project included more than 18 people and over 655 service hours from scouts, friends and family.

During his Scout journey, Sam has served as Assistant Patrol Leader, Chaplain’s Aid, Historian and Assistant Senior Patrol Leader. He has earned 37 merit badges, Gold, Bronze and Silver Palm Leaves, Totin’ Chip, Firem’n Chit, Salisbury Historic Trail Award, World Conservation, God & Church Religious Award and Ecology Environmental Science Summer Camp Award in 2016. Troop 443 honored Sam by giving him the Historian Award in 2015 and 2016, Scout Spirit Award in 2015 and Scout of the Year Award in 2016. His patrol has earned the National Patrol Award in 2015 and 2016. In April 2017, Sam was elected by his fellow scouts to join the Order of the Arrow, BSA’s National Honor Society for experienced campers. He completed his Ordeal in September 2017 and is a member of the Order of the Arrow.

Sam is an 8th-grader at Sheets Memorial Christian School in Lexington. He is an “A” Honor Roll student and a member of the band. He has also served on the Student Council, won the 2016 Most Improved Band Member Award and the highest science achievement award for his class in 2017.

An active member of High Rock Church of Lexington, Sam is the son of Scott and DeeAnn Vincent of Lexington.