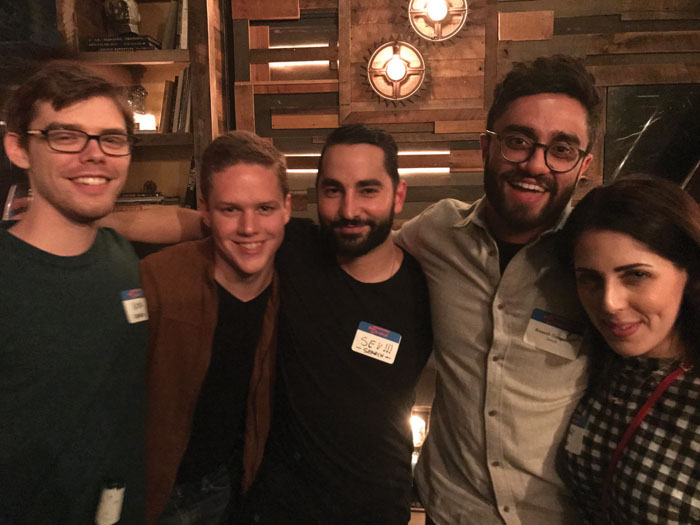 By Katie Scarvey
For the Salisbury Post
When Will Merrick wrapped up his high school career in 2011, he stood out among his cohort of Rowan County home-schoolers graduating that year. Will was headed across the country – with a big scholarship, no less – to attend the School of Cinematic Arts at the University of Southern California. During his four years there, he no doubt honed his filmmaking skills, but he also made connections that would lead to his first major film editing gig.

Will was a USC sophomore when Aneesh Chaganty, a classmate who’d recently graduated, tapped him to edit a Google Glass spec film that helped land Chaganty a job with Google in New York. Later, when Chaganty left Google, he approached Will again, this time to edit a feature film called “Search,” written by another film school classmate, Sev Ohanian.

Finished with college by then, Will was able to commit to the grueling project, and that choice has paid off. “Search” generated huge buzz at this year’s Sundance Film Festival and was bought by Sony Pictures, which means it should be showing up in theaters around the country later this year. Pretty heady stuff for a 24-year-old.

Will’s parents, Julia Davidson and Bill Merrick, both of Salisbury, can’t be too surprised at their son’s career trajectory. When Will was 9 months old, Julia had a hard time shooting video of him because he kept trying to grab the camera away. At 4, Will allowed her to wield the camera, so long as she was filming the Thomas the Tank Engine dramas he staged. “He was so serious about them,” Julia recalls.

Will got his first video camera at the age of 11, with the goal of recreating a Star Wars-style light-saber battle. His interest in making films soon “morphed into an obsession,” Bill says.

Friends and family were recruited to act in Will’s projects, says Bill – who gamely played the villain in one of Will’s early efforts, “The Secret Treasure of the Salisbury Prison,” some of which was filmed at the Rowan Public Library in Salisbury. Will would then go online and teach himself how to edit.

“He’d stay up half the night,” Bill says. “You’d have to remind him to eat or sleep.”

Will made a YouTube video when he was around 15, a tutorial explaining how to rig your own Steadi-cam (“the Merricam”) out of a camera tripod. The five-minute video been viewed more than 1.2 million times and has more than 14,000 likes.

Bill, who home-schooled Will from the sixth grade, says that while he initially resisted all the time his son was devoting to filmmaking, he grew to accept it.

“It was like having a classical musician or Olympic athlete in the house,” Bill says. “He didn’t just fit filmmaking into his life; he fit his life around filmmaking.”

Besides his own projects, Will made some videos to promote the Rowan Public Library’s summer reading program and Piedmont Players youth theater. He also found time to act in youth productions, including “Grease” and “Aladdin.” (Will is proud to be featured on the Cara Reische mural inside the Norvell Theater).

Will is grateful for his unconventional education, which allowed his creativity to flourish.

“I think that working on my own time and having time to freely explore ideas made me more independent and outgoing,” Will says. “And I wasn’t constantly worrying what my peers around me thought…I wasn’t being analyzed through this social lens.

Working on “Search” consumed a year of Will’s life. He and his co-editor, Nick Johnson, spent 12 to 14 hours a day toiling in front of computer screens.

“It was pretty intensely stressful,” Will says. “Having supportive people around was essential. But we all believed in the project the whole time and pushed through it.”

Devoting so much energy to one project takes a leap of faith, but the “Search” team’s faith was rewarded when the film, which stars John Cho and Debra Messing, was selected to be part of the Sundance Film Festival in Park City, Utah, the largest and most prestigious independent film festival in the country.

“Search” generated huge buzz and won the NEXT audience award and the Alfred P. Sloan Feature Film Prize. Reviewers ate it up, and the film’s editing drew special praise. Within hours of the screening, a bidding war to secure the worldwide release rights was underway.

Will says after a night of celebrating he woke to a 7 a.m. text telling him that the film rights had been sold for $5 million.

The movie is a thriller about a Korean American man (played by John Cho) whose teenage daughter goes missing. Desperate to know what happened, he breaks into her computer looking for clues to explain her disappearance. Later, a detective (Debra Messing) is enlisted to help.

“Search” is a “very normal mystery movie,” Will says, but one told in an unusual way. What makes the movie so fascinating – and what made the editing process so vital – is that the story is told entirely on screens: think Facetime, Gmail, iMessage, YouTube. For this sort of storytelling to retain a cinematic quality is a major challenge, but reviewers who saw it at Sundance suggest that “Search” pulls it off.

Will attended the entire 10 days of Sundance in January, which was full of happy people who weren’t getting much sleep, he says.

By the time “Search” screened, Will says he was pretty sick of it – but watching the audience react enthusiastically was reenergizing. “It played really well,” he says.

Will and Nick are already getting plenty of attention from film bloggers and journalists fascinated with what they accomplished as key members of a creative team that took screen-centric storytelling to a new level.

Bill says he hopes his son will eventually get a chance to move beyond editing to write and direct his own film. Whether or not that happens, Will says that as an editor, he’s learned a lot about storytelling.

“I think you get to see the mistakes people make when you’re an editor, and you learn a lot about pacing. You learn what’s necessary and what’s not to tell a story. I think you are just learning to be a better filmmaker.”

Will, who lives in Hollywood, is working on some smaller projects these days – music videos and commercials. He isn’t ready just yet for another all-consuming project. “I tell people that after ‘Search,’ I have commitment issues,” he says, only half-joking.

After “Search” is released later this year, it’s likely that plenty of opportunities will come Will’s way.

Will’s early fans in Salisbury won’t be surprised that his career is taking off. Back in 2011, Piedmont Players Theatre Director Reid Leonard told a Post reporter who profiled Will that it would be fun to watch what Will did in the future.

Turns out he was right.

There are no trailers for “Search” yet, but here is an interview of Will and his co-editor Nick Johnson that includes some footage from the film.