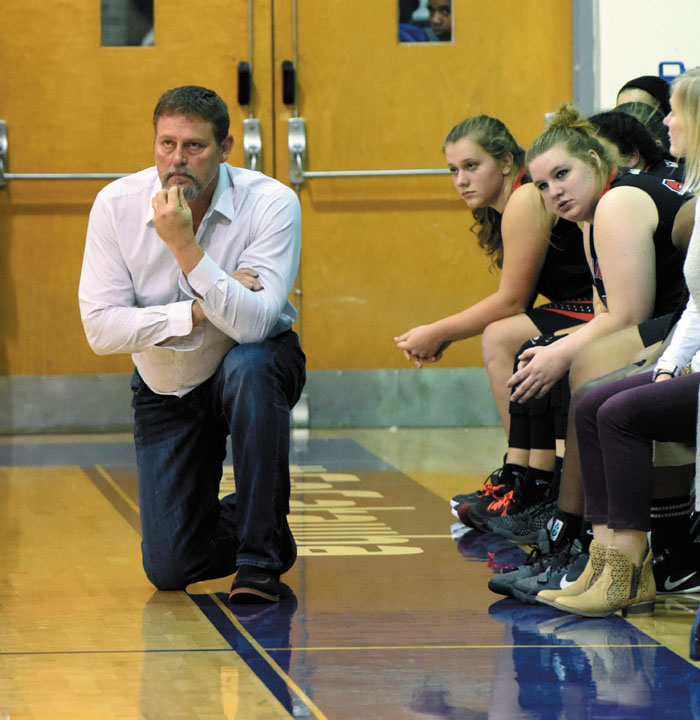 LANDIS — Think South Rowan athletics, and the hulking, intimidating image of John Davis, a Teddy Bear who looks like a grizzly, probably comes to mind first.

A lifetime Raider, a South Rowan graduate who came home after playing college basketball at St. Andrews, the 49-year-old Davis taught his last class at a school he loves on Friday.

“After 29 years at South, three as a student and 26 as a teacher,” Davis said wistfully.

Davis agreed to accept a social studies teaching position at Mooresville some time ago, but he postponed his moving day until after basketball season. There wasn’t any way he was leaving South’s girls basketball team until the last game was played. That’s a squad he coached the last three seasons.

There are several factors at work. Davis’ move is based on academics, not athletics. The struggle for health by Kim Davis, John’s wife, is a factor. He has no plans to be involved in coaching at Mooresville, so he’ll have more time at home. Coaching high school basketball is almost a year-round deal now. It’s time-consuming with open gyms in the spring, summer camps and fall workouts.

Playing for coach Bobby Parker, Davis was an exceptional performer at South in the 1980s, one of the best in school history.  He averaged 15.8 points per game as a junior and 17.7 as a senior. He was 4A Central Piedmont Conference Player of the Year once — when South was competing with the Winston-Salem schools — and first team All-Rowan County twice.

Davis’ basketball skills led to the opportunity to get an education at St. Andrews in Laurinburg. He was a fine player for the Knights. He wasn’t tall for a forward at 6-foot-4 and he wasn’t a sky-walker, but he learned to out-think and out-work opponents.

“I had zero dunks and I made just one 3-pointer in my college career,” Davis said. “Everything I ever got was on 2-point baskets and free throws.”

After earning his degree, Davis returned to Rowan County for pit stops at East Rowan High and Salisbury High. The opportunity to return to teach and coach at South arrived in 1993.

“Dr. (Alan) King was the principal at South then, and I’ll always thank him for giving me a chance,” Davis said. “There are more takers than givers in this world, but he gave me the chance to be a giver, to give something back to the South Rowan community.”

South was a large 4A school in the 1990s and had varsity, jayvee and freshman teams. Davis coached the freshmen first. Then he was elevated to the jayvees. Then he was the varsity assistant coach for a year. He served a long, six-year apprenticeship with the idea that he’d eventually take over for Parker. In June 1999, Davis was named head varsity boys coach.

“I couldn’t have had a better mentor than Bobby Parker,” Davis said. “I just tried to follow him.”

Just as Parker had done, Davis fought the good fight with South’s boys for 13 seasons from 1999-2000 to 2011-12. Through 2007, that struggle was conducted against 4A city schools with more size and more athletes. Davis coached against West Forsyth’s Chris Paul, among others. R.J. Reynolds seemed to have ACC recruits every year in those days.

Davis coached both of his sons. “Derek and “Little John” were strong players, and they helped, but Davis’ final record with South’s boys was 114-209.

The grind, the losses, the road trips had taken it out of Davis by 2012. He was burned out. He resigned.

“I didn’t ever want to see another basketball game, couldn’t even watch the NBA on TV,” Davis said. “I was just tired of it.”

By 2015, the coaching itch was back and the passion was back. Davis was more mellow, more relaxed, and he was at a different place in his life.

That’s when he was hired to coach a South girls team that had just graduated 11 of 13 players, including star Avery Locklear.

“People told me that coaching girls was going to be a lot different, but they’re not that much different,” Davis said. “You just have to explain to girls why you do stuff.”

Davis started almost from scratch, but he did have freshman Janiya Downs.

“My first year we were struggling, and then Janiya gets a concussion in the Christmas tournament, and we’re 2-11,” Davis said. “We were just shooting horrendously, and I told the girls they had to get more practice shots up if we were going to get better. The next day  I open the gym up and Riley Corriher comes in there and she shoots 1,000 3-pointers before she leaves. That’s when I knew we were going to be OK.”

South finished that 2015-16 season in ninth place in a 10-team league. South didn’t even qualify for the conference tournament, but the Raiders did win four of their last five. They’d turned the corner.

“We made breakthroughs,” Davis said. “Sometimes girls think they can’t do something, but then they figure out they can. We tried this one drill, jumping onto the bleachers, and I remember (backup post player) Lauren Shell not quite making it and falling backwards. But in time, she was doing that drill easily.”

South made a jump to 14-12 last season. Moving down from 3A to 2A this season, the Raiders climbed to 18-9, won 14 conference games in a good league, beat Salisbury three times and won a road playoff game. South pushed North Wilkes hard in the second round of the state playoffs before losing, 63-60. North Wilkes was state runner-up.

So Davis leaves with the program on firm ground, and with Downs, a district player of the year who is certain to become the school’s all-time leading scorer, still around for one more season.

“Janiya is one of the special ones, she just has this great will,” Davis said. “But I had nothing but great kids this year and great parents. It was a tremendous basketball season, and we competed very well in a tough conference and a tough county.”

Dr.King came around to see Davis as his time at South was drawing to a close last week. Sometimes things travel full circle.

Davis starts his new adventure on Monday. He may teach a long time at Mooresville or he may explore other business opportunities after he’s put in 30 years with the school system and qualified for full retirement.

As far as coaching, it looks like Davis may have a hard time shaking that obsession.

One of his former South players, Damien Argrett,  coaxed him into coaching the Lake Norman Hornets 7th-grade travel team. On Saturday in Winston-Salem, Davis coached a new group of girls to a championship.

North Carolina holds off Duke to advance to ACC…