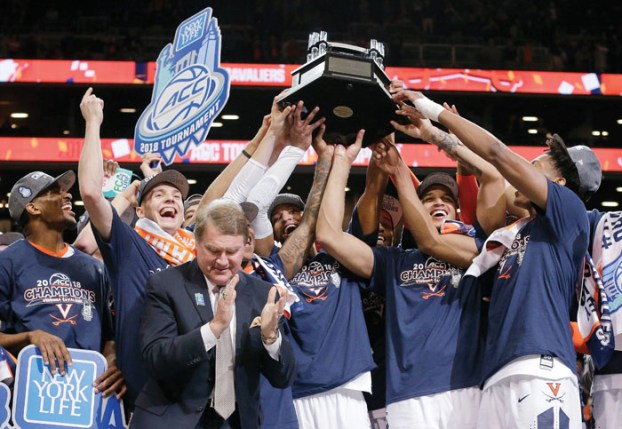 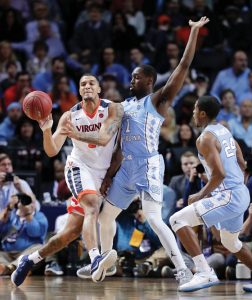 Virginia forward Isaiah Wilkins (21) passes off the ball against North Carolina forward Theo Pinson (1) in the first half of an NCAA college basketball game during the championship game of the Atlantic Coast Conference men’s tournament Saturday, March 10, 2018, in New York. (AP Photo/Julie Jacobson)

NEW YORK (AP) — With no one-and-dones, no sure-fire NBA lottery picks, No. 1 Virginia put together one of the most dominant seasons in the storied history of Atlantic Coast Conference basketball.

Kyle Guy, Devon Hall and the Cavaliers beat No. 12 North Carolina 71-63 in the ACC championship game Saturday night to finish 20-1 against league competition.

Virginia (31-2) set a school record for victories, won the conference tournament for the second time in five seasons under coach Tony Bennett and will most certainly enter the NCAA Tournament as the No.1 overall seed when the field of 68 is announced Sunday.

Not bad for a bunch that started the season unranked and picked to finish sixth in the ACC.

“I think we always knew this could be a special team,” guard Ty Jerome said.

And now that the Cavaliers are favorites, Hall said they try to out-underdog the underdogs.

“You fight like you’re not supposed to win or nobody expects you to win,” he explained.

With plenty of their fans packing Barclays Center in Brooklyn, the top-seeded Cavaliers beat sixth-seeded North Carolina (25-10) for the second time this season and snapped a seven-game losing streak to the Tar Heels in ACC Tournament play.

Guy, the tournament MVP, scored 11 of his 16 points in the second half and Hall added 15 points, five rebounds and four assists. Jerome had 12 points, six assists and six rebounds for Virginia. Contributions from everywhere, a microcosm of this special season.

The Cavaliers dominated the ACC with efficiency, tenacity and teamwork. They went 17-1 in the regular season, the one loss by one point in overtime to Virginia Tech, and finished first by four games.

“I think that we know who we are,” senior Isaiah Wilkins said. “We don’t have a really big room for — a really big margin for error. As older guys, you develop over the years from going to playing, like five minutes my first year to now, and you grow. I’ve grown with Devon over time like that, so I think that’s our way. It’s not going to be questioned or changed, unless you’ve got any plans, Coach?”

“This is one of the most connected groups I’ve ever coached,” Bennett said as he accepted the championship trophy.

Virginia held the Tar Heels scoreless for five minutes and took a 58-49 lead on De’Andre Hunter’s baseline fadeaway with 3:32 left. North Carolina snapped the drought with a 3-pointer by Luke Maye, who scored 20, but Jerome nailed a 3 out of a timeout to restore the nine-point lead.

UNC, playing in its record 35th ACC championship game, never got closer than five again as Virginia closed it out from the foul line. The Cavaliers hit their first 15 free throw attempts and finished 20 of 22.

The Tar Heels played about as well as any team has this season against the best defensive team in the country, shooting 40 percent and committing only nine turnovers. In the regular season, the Tar Heels managed only 49 points and 29 percent shooting while committing 19 turnovers in a loss at Virginia.

The Cavaliers played defense with their offense, turning the ball over just four times and allowing the up-tempo Tar Heels only two fast-break points. Virginia makes every possession feel crucial.

“That’s where they take advantage of teams,” said North Carolina guard Joel Berry II, who had 17 points and four 3-pointers.

North Carolina: UNC won three games in four days in Brooklyn and might have played its way into a high enough seed — probably a No. 2 — to open the NCAAs in Charlotte. The Tar Heels are 33-1 in NCAA games played in their home state.

Virginia: The school’s other ACC Tournament titles came in 1976 and 2014. … In nine seasons in Charlottesville, Bennett has built one of the most successful programs in the country on a foundation of slow-paced but precise offense and sound and suffocating defense. When he climbed the ladder to cut down the last piece of string holding up the net at Barclays, Virginia fans filled the arena with chants of “To-ny! To-ny!”

They love him at UVA, but one accomplishment has eluded him: Virginia has yet to reach the Final Four since he took over. An Elite Eight run in 2016 is Virginia’s best tournament showing.

“I think we have the group to do it,” Hall said.

The ACC Tournament heads back to North Carolina after a two-year stint in New York City, but expect it to be back sooner rather than later. Maybe even as soon as 2022, when the arena is free and the ACC has no plans set. Next year’s ACC Tournament will be played in Charlotte.

Both teams will head home and find out their NCAA Tournament destinations. The Cavaliers can pick their first-round spot as the top seed and will likely open in Charlotte next week as the top seed in the South Region.