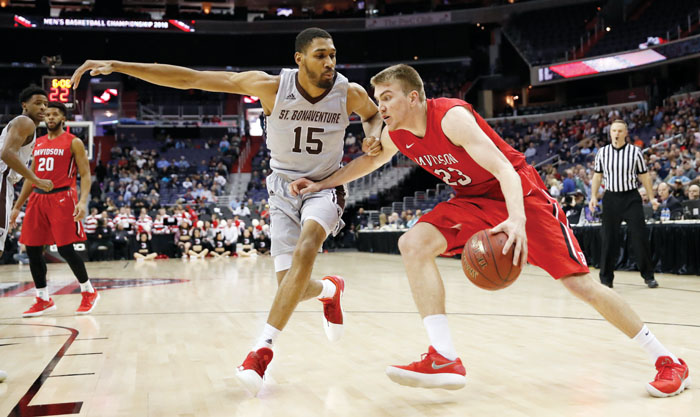 Early this season, when the Eagles were struggling on defense and incorporating freshmen into the lineup, his phone was pretty quiet. But on Saturday, it was blowing up with congratulatory text messages after the Eagles used a late 11-0 run to break a 58-all tie and beat Hampton 71-63 in the Mid-Eastern Athletic Association championship.

“This championship is different,” Moton said, because it was unexpected. “To be honest, a lot of people gave up on this team.”

The championship — and automatic NCAA Tournament berth — is the second in a row and third in five years for the Eagles (19-15).

“We’ve created the standard at North Carolina Central and I’m proud because these guys and the other guys in the locker room, they upheld that standard,” Moton said.

Pablo Rivas had 22 points and the Eagles took command after neither team scored for more than two minutes.

“We just started coming up with some stops,” said Rivas, whom Moton described as his best player, and who agreed to come off the bench after starting just one game.

Jordan Perkins added 13 points and nine assists and John Guerra scored 12 for the Eagles, including a pair of 3-pointers early in the second half. The junior had arrived at Scope Arena for the start of the tournament earlier in the week having made just five 3s all season.

“They had some guys that we kind of dared to make plays and they made them,” Hampton coach Ed Joyner Jr. said.

The loss came in the Pirates’ final MEAC game because they are moving to the Big South next season.

Malique Trent-Street scored 15 points to lead the Pirates (19-15), who also were seeking their third MEAC title in five years. Instead, as the regular-season champions, they are assured a spot in the National Invitation Tournament.

“The NIT is cool, but we wanted to leave the MEAC with the championship,” Trent-Street said.

Akim Mitchell and Greg Heckstall each added 11 points for the Pirates, who made just 4 of 18 3-point tries (22.2 percent).

A 3-pointer by Kalin Fisher pulled Hampton even at 58-all with 4:24 to play, but the Pirates didn’t score again until Trent-Street’s layup with 18 seconds to go.

N.C. Central: The Eagles have made winning a habit in recent years, and did so this year with two freshmen — Reggie Gardner Jr. (11.0 ppg) and Jordan Perkins (8.3 ppg, 5.4 apg) — figuring prominently in the backcourt. They combined with veterans Raasean Davis, Rivas and Guerra to make NCCU a dangerous team to take lightly in the postseason.

Hampton: The Pirates were sloppy with the ball in the closing minutes, ruining their chances at a victory in front of a partisan and pro-Hampton crowd. The Pirates also got little help from their bench, which was outscored 28-9 by the NCCU reserves.

N.C. Central will head to the NCAA Tournament for the third time in five years.

The Pirates’ loss means the NIT is their consolation prize.

Aldridge made two 3-pointers and sliced through two defenders for a two-handed dunk as part of a 10-4 surge that gave the Wildcats a 70-63 lead with 3:33 remaining. Aldridge, the A-10 co-player of the year, was 8 of 14 from the field and made six of the Wildcats’ 16 3-pointers.

Kellan Grady added 23 points and Rusty Reigel had 10 for Davidson.

Jaylen Adams finished with 20 points and Matt Mobley scored 14 of his 17 in the first half for the Bonnies (25-7).

FRISCO, Texas (AP) — The long wait is over for Marshall after all those long shots by Jon Elmore.

Elmore scored 20 of his 27 points after halftime, with a Conference USA championship game-record seven 3-pointers, and the Thundering Herd are going to their first NCAA Tournament since 1987 after a 67-66 win over Western Kentucky on Saturday night.

“We earned it. We fought all year long,” said Elmore, with a cut-down net draped over his shoulder.

After coming so close last year, losing in the C-USA title game, Elmore kept hitting long 3s in the second half for the Herd (24-10). He made six of his 3s after the break, including 11 straight points in a span of just more than 2 minutes.

“We talked about it before the season this year. We were thinking back about just how the season ended, just the feeling in the locker room,” Elmore said. “Everybody’s heads were down, people were crying, you could have heard a pin drop in there. … We didn’t want that again.”

This time, tournament MVP Elmore described what he called an awesome scene with 70-year-old coach and Marshall alumnus Dan D’Antoni jumping around with his players.

“You can tell I’m happy. I’m happy for these kids, I’m happy for this school,” said D’Antoni, the self-proclaimed country boy who wears T-shirts under his jacket while coaching. “A long time coming.”

The Herd had a 67-55 lead when Elmore made his last 3 with 3:40 left. Western Kentucky (24-10) then scored the game’s last 11 points before missing two shots in the final 20 seconds. Jannson Williams got the final rebound and managed to call timeout while falling to the court with 7.3 seconds left.

The Hilltoppers, with 10 wins against teams who have won at least 20 games, missed a chance to get back to first NCAA Tournament since 2013. Instead, they wait to see if they get an NIT bid.

“If you leave anything NCAA Tournament in the committee’s hands, you’re in trouble. You have to win. Marshall won. They took it out of anybody’s hands,” WKU coach Rick Stansbury said. “I’m comfortable and confident that our team has done enough and deserves an NIT berth for sure.”

Ajdin Penava added 16 points and nine rebounds for Marshall, which went into the tournament as the No. 4 seed.

Justin Johnson led WKU with 21 points and 12 rebounds, while Josh Anderson and Lamonte Bearden both had 13 points.

Marshall: The Herd were in the Southern Conference when they went to their last NCAA Tournament 31 years ago. … D’Antoni is a Marshall alumnus, and the brother of Houston Rockets coach Mike D’Antoni, who was at the game since his NBA team was in town to play the Dallas Mavericks on Sunday.

Western Kentucky: Freshman guard Taveion Hollingsworth took a shot to the face while going for a rebound on the opening possession, and Stansbury said it’s likely that the freshman broke his nose again. Hollingsworth, who was averaging 13.5 points a game, was 0-for-5 shooting and had two free throws while playing 35 minutes.

The Hilltoppers wait to see if they will get to play another game this season.

For the first time in 31 years, Marshall will be watching on Selection Sunday knowing it’s in the NCAA Tournament and waiting to see who will be its first-round opponent.