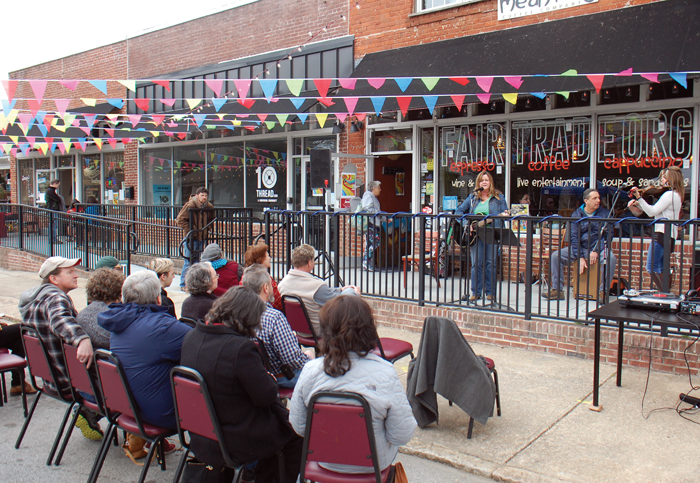 SALISBURY —  What happens when you close the 1000 block of South Fulton Street to celebrate the third business anniversary of Mean Mug Coffee Co.?

Well, all of a sudden you have Gail Poulton, an instructor with SoFul Yoga & Wellness, conducting  a yoga session in the middle of the street.

You have a line of musicians waiting to play from the coffee shop’s front porch.

You have fathers like Ashton Pryor riding up to this mini-street festival in a tandem bicycle with his daughter, Margot May.

You have the smell of warm bread from Better Loafing, the buzz of activity around the Happy Roots Arts Collective and the irresistible taste of Darryl Meadows’ chicken and ribs.

“I think it’s the community giving back to us,” she said of the good-sized crowd.

From the beginning, Medina explained, her goal has been to reach out and become a kind of community hub, “and the community has responded.”

Mean Mug is central to the Chestnut Hill and Fulton Heights neighborhoods. It has become a vibrant place for monthly Peace Circle meetings, karaoke nights and salsa dancing.

Regular music nights are Fridays and Sundays, and rotating art exhibits, featuring local artists, fill one of the long walls in the establishment. This month, starting Monday, the shop will feature the work of female artists in an exhibit called “The Meanest Women.”

“It’s a lot of work,” Medina said of her small business, “but so many things have happened here.”

People have become engaged at Mean Mug, formed friendships and organized community-action groups such as Salisbury Indivisible. Other groups have started at Mean Mug and grown, Medina said.

The little shop has offered many people their first jobs, and Medina, a native of Guatemala, takes pride in that.

“It’s just amazing how this place connects to the community,” said Sue McHugh, a musician who often performs on Friday nights at Mean Mug. The Friday night music has rotating hosts, and sometimes the local performers on tap those evenings “all end up jamming together,” McHugh said.

McHugh was helping introduce the bands and individual performers Saturday. “This was intended to be a small, intimate affair,” McHugh said. “We’ve got more (musicians) than we can handle.”

Orland Carra, a member of the Old Rockers band, said what Mean Mug offers is “a real promotion of local, live music, which is great.”

The Old Rockers consist of Carra, Rex Rexrode and Richard Rathnell. They were the first of several acts to perform Saturday.

Carra said another good thing about Mean Mug is that it caters to all kinds of music and ages. There have even been poetry readings on occasion.

Kris Bulla brought her goats, Heimdall and Ymir, to the Mean Mug festival. Bulla said she would never bring her dogs to this kind of event, where there are so many people and distractions.

“The goats are much easier to deal with,” she said.

As Bulla sat at one of the outside tables on South Fulton Street, plenty of people stopped by to pet Heimdall and Ymir.

Nearby, Angela Fisher and Donna Russell Koontz enjoyed the beer and music.

“I’m so excited to be here,” Fisher said. “This is our neighborhood. I think it’s awesome, man. It’s about a community getting together to celebrate life.”

‘If you can’t eat them; treat them’: Girl Scouts…