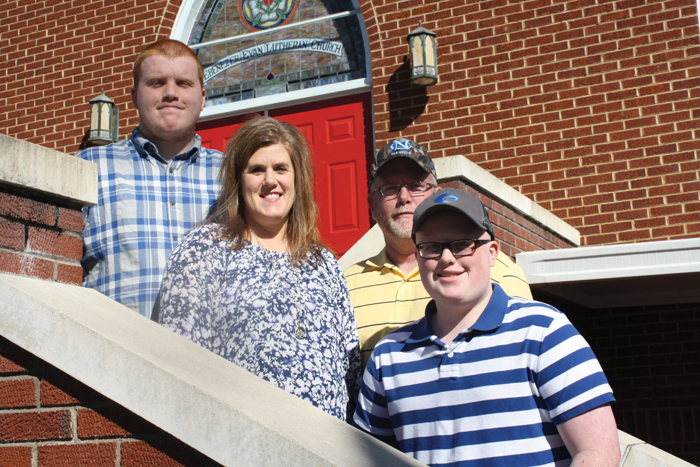 Logan Cheeseman loves making music and he’s good at it. As a 15-year-old freshman, Logan plays the bass guitar, drums, piano and guitar at a high level. He plays the guitar in the marching band at Jesse Carson High School, plays in the “Morning Rock” contemporary band at Ebenezer Lutheran Church and loves performing with his brother, Jacob.

All of this took a back seat during August and September, 2017 when Logan couldn’t shake what seemed like a lingering virus. Multiple doctor visits and an eventual visit to the ER that resulted after several days of high fever led to an ambulance transport to Levine’s Children’s Hospital in Charlotte. On October 11th, Logan was diagnosed with Hodgkin’s Lymphoma 4B, meaning that there were four cancerous spots in his chest and accompanied by fever and coughing. Later that week, Logan received a port in his chest to begin chemo therapy treatments.

Shannon Cheeseman, Logan’s mother, said, “I was mad. I didn’t know what was happening. We took turns sleeping on the couch in his room. The chemo was very rough on Logan and he had terrible mouth sores. This whole thing has been life changing for our family.”

Complications from the use of a common chemotherapy drug slowed Logan’s treatment because of high fever, low blood pressure and a rash on his body. Once doctors corrected the issue, Logan’s condition began to improve. He has been out of school at Carson High since October 1st.

Concordia Lutheran and Trinity Lutheran Churches have set the 5th Annual Love They Neighbor event for Saturday, March 17th. The first four years of the Love Thy Neighbor event have raised over $95,000 with a silent auction, breakfast (for donation) and a 5K/10K running event. Jason Ritchie said, “We will try to top last year and do an even better job to offset some of Logan’s medical expenses. Somehow, similar to the parable of the loaves and fishes, we have enough of everything even though we always worry that we don’t. The line is long for the food and people come to stay.” Last year’s breakfast used 87 dozen eggs and 1500 biscuits. Alexander Ham and Frank Corriher Meats provide the meat.

Crystal Karriker and Ritchie head up the running events. She said, “We don’t give shirts and the only awards that we have are for the top male and female in each race. The awards are handmade by Russell Foster. Atwell Fire Department shuts the roads down and makes sure everyone stays safe.”

Lorraine Nicely and Paula Sloop direct the silent auction and added, “We don’t even know the race is going on. The important thing is the silent auction! People can donate at Trinity Lutheran, at Ebenezer Lutheran and of course, here at Concordia.”

Important to Love Thy Neighbor organizers is that Logan enjoys himself. Ritchie said, “Logan, it is your day. You can do whatever you want!” Sloop said, “My greatest blessing was to see Zach walk in last year and watch as his mouth hit the floor! I don’t think he could believe that so many people were here to benefit him.” Last year’s recipient was Zach Thompson, a teacher at South Rowan High School. He passed away recently from complications of a brain tumor.

An important scan recently didn’t clear Logan but he’s making progress. When asked what he wants to do once cleared, Logan said, “I want to go to the YMCA and lift weights.” He’ll go back to school for half days, hopefully sometime in April once the chemo port has been removed. Logan hopes to be able to perform a couple of songs during the Love Thy Neighbor event. Ritchie said, “That is when Logan is in his element. He displays his faith often.” Recently, Pastor Bob Young at Ebenezer Lutheran Church asked Logan what he needed. Logan replied, “I need me some Jesus!”

While undergoing treatment, Logan got to meet Carolina Panther’s quarterback Cam Newton. Even bigger, the Make a Wish Foundation has arranged a jam session with popular singer Ed Sheeran. Logan doesn’t know what to expect yet and he knows that it isn’t likely to happen soon. But when it does, Logan hopes that will play together and record it. Already Make a Wish has plans for Logan to record two of Sheeran’s songs on video to send to the popular recording artist.

Shannon and husband Chad credit Levine’s Children’s Hospital for their great work with their son. Chad said, “Some of the families have been in the hospital for years. Everyone there is awesome. The doctors and the nurses were so comforting and they enjoyed picking with Logan. I think I should get a doctorate because of all I know now about treatment and pills. And that couch simply was not good for sleeping.”

Shannon said, “We all feel so much better now that hopefully the worst is behind us. There have been so many sleepless nights. All the kids at Levine’s who beat cancer get to ring a special bell. We hope that Logan gets to ring that bell very soon. We have another scan coming up on March 28th and we are praying that a spot in his chest has not grown. If it has, the doctors say that we just have to reevaluate.”

And in the meantime, lots of people from Concordia and Trinity Lutheran Churches are hard at work raising money to help with Logan’s medical expenses. Ritchie said it well, “We have such a giving community.”